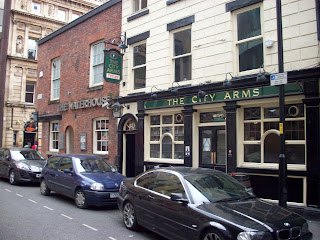 City Arms, Kennedy Street, 2010. (c) Pubs of Manchester.
.
An Empress Brewery house in the 1930s, Walkers in the '70s, and by 1994 a Tetley's house with a garish facade, this is the middle, the smallest, and the best of the three-in-a-row of the Waterhouse, City Arms and The Vine. The small front room and bar area leads to a little cavern-like back room down a few steps. The range of great ales on offer - about 8 handpumps - is impressive for such a small place, and accounts for its popularity - the post-work rush and weekends regularly sees trade slip out onto the street.
. 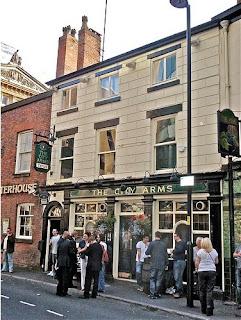 City Arms, Kennedy Street, 2009. (c) garstonian at flickr.
.
It had been a long old day by the time we visited and as such I'm struggling to recall which ale we had, but rest assured it was gulped down promptly. [Edit: it was Batemans XB]. In an area of town well-off for pubs, this is definitely one of the better ones and a must-visit.
.