Nothing is known about the Coronation Inn except that it stood near to the Black Boy on Old Millgate, as shown on a diagram in Manchester Underground [1].  It was roughly opposite Goulburns, the food purveyors, which placed it possibly as the building with double-arch top floor corner-window in the centre of the below painting. 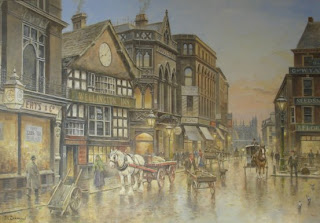