The Fire Engine was owned by a famous local boxer, Isaac Perrins, who retired from the sport after losing to the English champion, Tom Johnson in 1789.  Perrins went on to be the "Inspector of Engines and Conductor of Firemen", hence the name of his boozer.  After he died in 1801 the pub became the Red Lion, before being demolished for the building of Victoria Square [1].  It was on the corner of George Leigh Street (then just Leigh Street) and Sherratt (Spittall) Street.
. 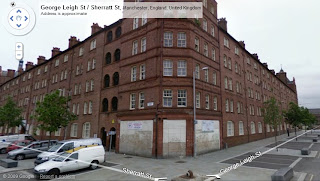