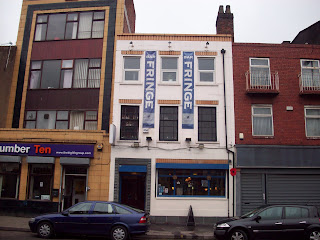 Great little Belgian-style bar, nestled on Swan Street, virtually opposite the Band On The Wall. Formerly the Old White Bear as seen here in the '70s, and Polars Bar, a hangout of some of Manchester's famous bands, who would prefer to prop the bar up here rather than get grief off fans in Dry Bar down Oldham Street. 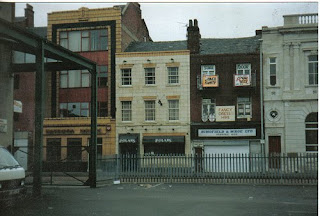 Polars, Swan Street, 1991. (c) deltrems at flickr.
Bez from the Mondays used to organise five-aside matches in the car park (where the biker owner now parks her bike!) and owner of Polars, Lee Pickering, used to hold after-hours parties in his flat upstairs [1]. 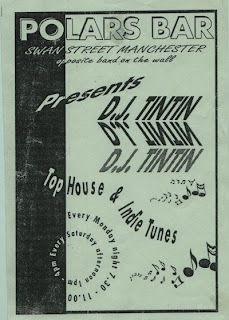 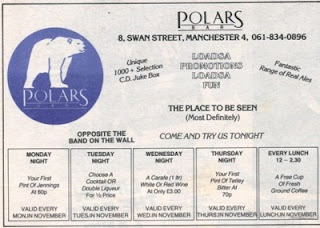 
The place has now been Bar Fringe for about 12 years and has created a good customer base (a mixed bag of locals, CAMRA chaps, match goers, bikers, Northern Quarter types) considering its slightly of "out on a limb" location. Selling usually four or five cask ales at a time, it keeps the beers well and rotates new beers in regularly and all of the five we tried on our recent visit were top notch. There is also a huge selection of bottled beers, ciders and even usually a barrel of potent real cider hidden in the back. Beers are reasonably priced at around £2.50 a pint. 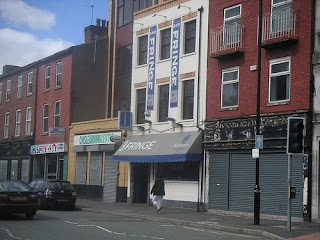 Fringe, Swan Street, 2008. (c) deltrems at flickr.
.
The pub is long and thin and therefore there is no pool table, however the ambience is fine and there is plenty of standing room, if little seating. There is, however, a big long beer garden (yard) at the rear with plenty of outside seating for the alfresco summer months. A decent juke box completes the picture, not forgetting the drinking memorabelia, oh and that motorbike (Bike On The Wall?). Fringe even got a review in the Guardian recently. Definitely one to have on your list when doing the real ale crawl from Victoria Station of the Angel, Marble, Crown & Kettle etc.
. 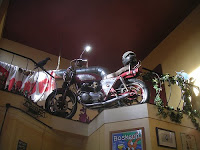