The Dog & Partridge was one of the first beerhouses to open in Ancoats in the late 1830s in what used to be a chemist's.  It survived until 1907 despite its poor structural condition, when the licensee was done for permitting drunkenness.  The Dog & Partridge was described as having "a rough class of customers, including women and young persons... it would be a blessing for the neighbourhood if it was closed [1]."  It stood on the corner of Henry Street, next door to the Dargan Arms - nowadays this is between the still-open Crown & Kettle and the still-standing Cheshire Cheese. 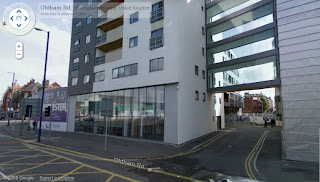