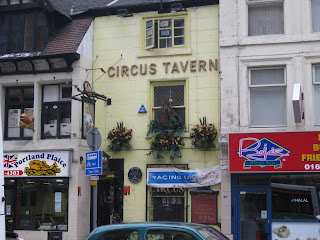 This pub sells itself as the smallest pub in Manchester, and indeed most certainly is. Owned by the same chap for many years, it is sadly currently up for sale as I believe he is now looking to retire. There is one real ale on, Tetleys on cask and a couple of lagers and ciders. Once upon a time, there was only draught bitter and no lager etc. - if you wanted this you could only have bottles or cans as the bar only had room for one pump. And it's only relatively recently that they actually got a till. In days of old, money was stored in a bucket behind the bar! The pub itself is two tiny rooms, but this keeps it cosy. There is no room for anything other than about 25 people maximum and the walls are adorned with photographs and memorabilia of the celebrities that have visited over the years. Worth going into for the novelty value if nothing else, though you will usually be met with a warm welcome as long as the pub isn't too full, in which case you'll be met with a locked front door (as happened to some poor chap as we exited)!
.
In the 1970s next door was a "fully licenced cocktail bar and two floor restaurtant", now a chippy. The Circus is flanked by two other decent pubs, quite fittingly named, the Old Monkey and Grey Horse. The pub itself, established in 1790, is named after the circus which used to be located at nearby Chatham Street. Like its neighbour the Grey Horse, the Circus was only upgraded from a beerhouse when it received its public house licence in 1961 [1].
. 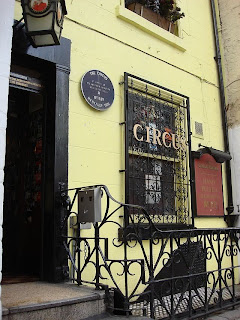