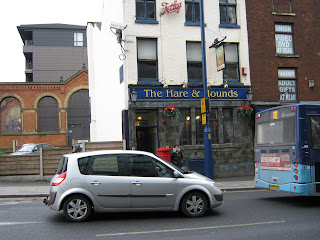 Cracking little boozer on Shudehill, just behind the old fish markets, formerly a Tetleys house (seen here in the 70s), but now a freehouse serving mainly Holts. The original Tetley signs can still be seen, however the Tetley lanterns in the above photo have now been replaced by Joey Holts ones. 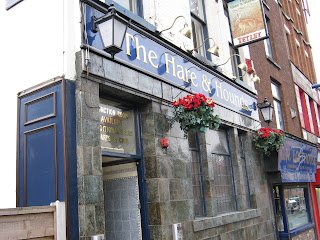 Hare & Hounds, Shudehill, 2010. (c) Pubs of Manchester.
.
The place itself is something of a timewarp, with three very different rooms. The front room, probably regarded as the best side is probably the quietest but still with access to the bar, as shown below (ashtrays!), and you can still hear the music but only from a distance.
. 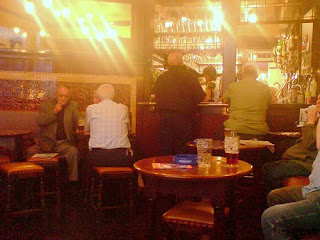 Hare & Hounds, Shudehill, 2007. (c) Mickaul at flickr.
The main room is where you first enter the main bar, with tiled floors and walls, it's full of traditional charm. Finally there is the back room which is always full. If you've ever fancied watching pensioner kareoke, this is the place for you. Also bingo on a Thursday and singalong on a Sunday. As for the beer, superbly kept and at £2.10 a pint, what more could you want! Post-script: mention must be made of the rather odd closed-shop meeting that was going on in the front room during our visit here. A dozen or so skinheads dressed in black, most with interesting tattoos, one of which was undergoing some sort of initiation ceremony while his missus was outside in the corridor. I'll give them the benefit of the doubt and hope it wasn't what it looked like; perhaps some goth / heavy rock music appreciation society?
. 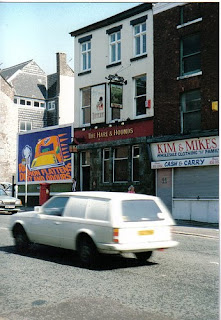