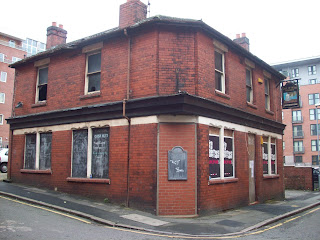 Hidden away in Angel Meadow just off Rochdale Road, the Pot of Beer closed its doors due to area redevelopment plans in 2004 after a spirited renaissance since the near death of Marston's old Harp & Shamrock. After a noble campaign involving real ale enthusiasts, local farmers and their fresh produce, and the local Polish community, this pub was doing well and was rammed on my one and only visit early in 2004 on a week night. 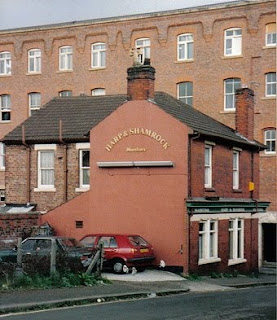 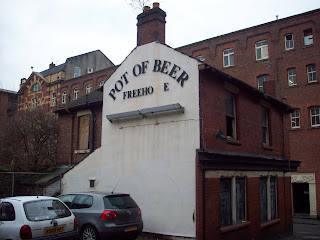 Pot of Beer, New Mount Street, 2010. (c) Pubs of Manchester.
.
Although it had modest opening hours (12-9pm weekdays and Saturdays 12-4pm only) it kept terrific ale and reportedly served good food, with Polish grub a speciality. The walls inside were plastered with brewery memorabilia, deeds and photos. The top picture shows that the empty Pot of Beer is now surrounded by yuppie flats in this up-and-coming part of town, so it's a crying shame that it now belongs to the redevelopers (at a reported cost of £750k). Note the Boddingtons freehouse sign that's still there in 2010.
. 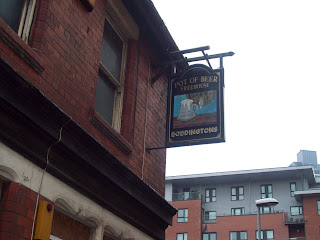 Pot of Beer, New Mount Street, 2010. (c) Pubs of Manchester.
.
The landlady had wanted to buy it and subsequently moved up the road to the Beer House (now The Angel). There's a couple of nice images at this blog... note the Polish graffiti. For an evocative account of Angel Meadow in the early 20th century, track down William Kenneth Jones's Different Times - comparing this with this for an idea of what it was like in this deprived, cramped, industrial yet residential part of town. 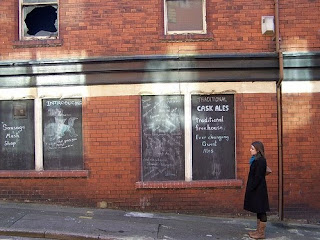 It's still a surprise to many that there is a pub nestled just behind the new apartments at the bottom end of Rochdale Road. The girl in the above shot seems confused to have come across the Pot! A clue as to its location comes if you cut up Thompson Street as you walk from Ancoats (Oldham Road) to Angel Meadow (Rochdale Road), as we often to on Saturday mornings as we move from the Shamrock (Bengal Street) to the Marble Arch. For a split second, a line of sight gives you a fleeting glimpse of the Pot of Beer between the new builds. It's as if the pub is giving you a reminder of its very existence amongst the redevelopments. Surely someone could make a go of this proud little pub and follow in the footsteps of the celebrated and reborn real ale and food havens, the Marble Arch and The Angel? 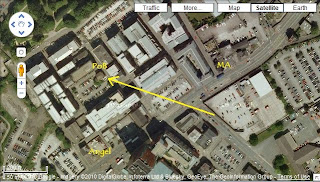