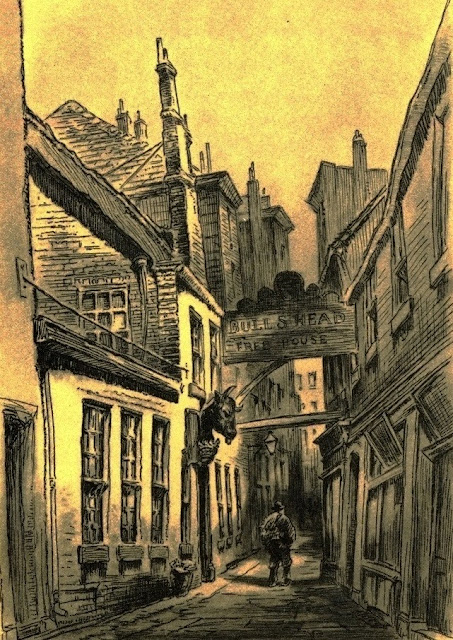 Market Place was situated at the bottom of Market Street to the right where the pedestrianised New Cathedral Street is, and it had a number of courts or yards off it. Bulls Head Yard contained the Bulls Head Hotel, depicted here in a lithograph and here in 1905, once a Wilsons house, once a free house, and near to Bowens Spectacles Shop on Market Place (note the giant specs in the these photos!).

George Mold describes the area: "It was a warren of narrow streets in which was an amazing collection of licensed premises. Best known perhaps was the Bull's Head which housed a curious three-cornered chair in which it was said Prince Charles had sat when he made his headquarters there when he reached Manchester during the 1745 rebellion [1]."

This brilliant pre-war photo from 1938 shown below is so evocative of the old Manchester which was damaged by the Luftwaffe in WWII and then mistakenly buried for good beneath the monstrosity that is the Arndale Centre. 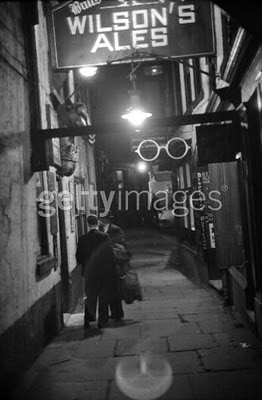 Beneath Market Place was an old underground shooting range and skittle alley, later used for cheese storage - it was bricked at either end leading to speculation that it may have been part of a longer tunnel running from the cathedral [2]:

"Inside the (Bulls Head) down the cellar steps... seemed to be like a tunnel. I wandered further on. The walls were brick, the ceiling was semi-arched and I well remember passing some cheeses. I went on and on and became frightened. I turned back but could not find my way out again. I realised that the passages were not straight, but honey-combed, going in all directions like a maze [2]".

The Bulls Head was lost in WWII when Market Place was bombed in 1940. An Evening Chronicle article in 1958 reported on the final demolition of Market Place:

"A mystery, below-surface passageway was uncovered by demolition workers near the corner of Market Street and Market Place - centre of 'old' Manchester. I clambered through in the opening; peering into the half-light, breathing the cold, clammy atmosphere of yesteryear. Most of the brickwork in the 9 feet high, 5 feet wide tunnel was flaking with age. It stretched for about 25 yards, crossing below Market Place. There it had been bricked off. An official of the main firm handling the work said: 'There is no sign of this passage on the plan from which we are working. The tunnel seems to run in the direction of the cathedral [2]'".