Further up Jersey Street where it crosses Radium Street is the recently closed Cross Keys. These two images from the Manchester Archives and Local Studies Image Collection show the pub in better days in 1962 and 1967, the latter is a reminder of how houses and pubs were crammed in between the mighty mills of old Ancoats, the birthplace of the Industrial Revolution. It's shown below as a Taylor's Gold Medal Eagle Ales house. 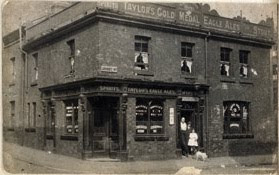 The photo below from The Conservation and Protection of Victorian Pubs in Manchester (a nice little booklet priced 35 pence from Beer-Inn Print) shows how Ancoats folk would congregate in and around their local pubs, until the City Council, in their wisdom, decided to destroy their communities by ripping down houses and replacing them with waste ground. The photo is probably from as recently as the 1980s. 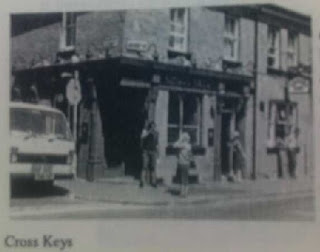 The Cross Keys has been a licensed house since 1830 but the original pub was situated about 50 yards further up Jersey Street and was briefly known as The Amalgamation. It was demolished in the late 19th century to make way for a brass foundry [3]. So, the Cross Keys set up on the corner of German Street, which was renamed to Radium Street in 1914 for obvious reasons. What's not so obvious is 'Radium'. In 1914 radium was a pioneering cancer treatment at the Christie Hospital and a number of eminent names including Ernest Rutherford campaigned in the Manchester Guardian to raise £25,000 to bring this treatment to the region. Thanks to a series of 'Radium Days' and a generous donation from a certain Edward Holt, the Radium Institute was established in the Manchester Royal Infirmary. Following another donation from Sir Edward and Lady Holt, this time of land at Nelson Street, the Manchester & District Radium Institute, later to become the Holt Radium Institute was formed, which then merged with Christie Hospital. Edward Holt, in case you're wondering, was indeed the son and heir of the one and only Joseph Holt, and Manchester's finest brewers continue to support The Christie today.
. 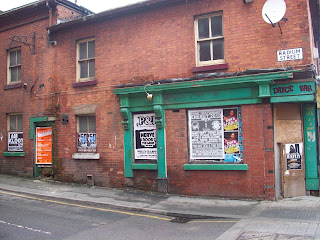 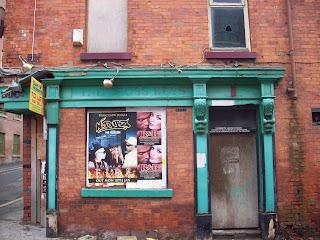 In more recent times the pub attracted some of the Sankey's clubbing crowd and was reportedly open all hours - the sign above the door says 'Dance Bar'. Never went in here so can't comment, but when Tetley's bought it from Taylors Eagle Brewery in 1922 the sale notice described on the lower floors a lobby, bar parlour, vault, smoke room, kitchen, scullery, clubroom and three cellars [3] - sounds like a big old place. Incidently, the bedrooms upstairs were looted in an 1834 robbery which made the local papers: 'they slipped upstairs, entered a bedroom and forced open a chest in which cash and silver plate were deposited, and took twenty guineas and seventy soveriegns... they did not meddle with the plate. Several young men, strangers of suspicious appearance, had been loitering about the door during the afternoon and it is possible that the robbery was committed by some of the London thieves on their way to Doncaster Races [3].' 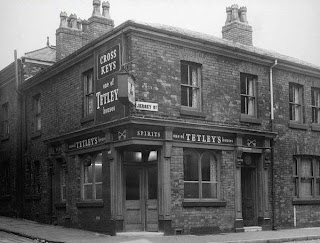 The Cross Keys is still up for letting or sale in 2010, perhaps someone will give it a go when the seemingly stalled regeneration of old Ancoats is complete.
. 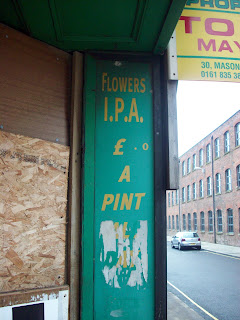