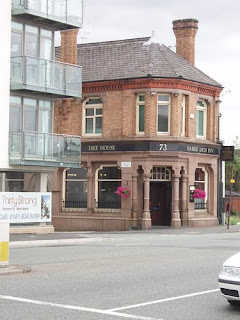 Marble Arch, Rochdale Road. (c) Swirvin at flickr.
Generally classed as Manchester's finest pub and who are we to argue? Built in 1888, this pub has been transformed from dingy side street boozer to beer drinkers' paradise and is first on the list for most discerning beer drinkers when visiting Manchester.  It replaced an original pub called the Wellington, and was known as the Wellington and Wellington Vaults as recently as 1971.  It was given grade 2 listed status in 1988. The pub itself is a fine old tavern with a long sloping floor down to the bar situated at the bottom end of the room. The walls are tiled in the traditional lime green pub tiles (hidden behind plaster board in the 1970s), and the many different beers they have supplied are shown by way of bottle displays on the shelves and sideboards on the wall (this blog entry does the decor more justice than we could). 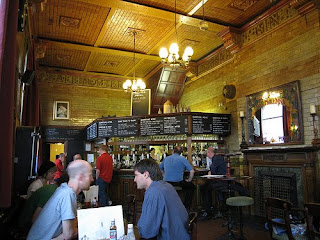 Marble Arch, Rochdale Road. (c) Bernt Rostad at flickr.
At the back is a small restaurant area which overlooks the brewery which can be seen via glass panels at the back. And finally via the same route, there is a paved back yard with tables and chairs, which turns into a total sun trap come summer! Beware you thirsty balding gents who will leave here with a glowing napper after a few hours out the back in the summer months. 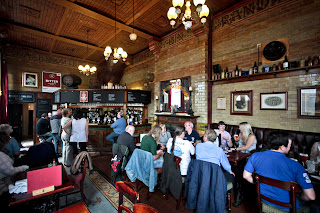 Previously owned by various breweries, it was bought outright in 1984 and became a freehouse and in 1997 commenced brewing its own beers under the Marble Brewery banner (website still not up and running, so here's its wiki). So successful has it become that it now sells to many different pubs, shops and established posh hotels such as The Lowry and the Raddisson. As for the beer, usually at least ten different real ales on, sometimes more. The Marble range is always carried with guest ales from all over the country and beyond. The good lads who do the brewing: 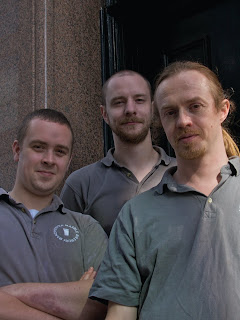 Marble Brewers: James Campbell, Dominic Driscoll, Colin Stronge (c) agent2magazine.
Prices are reasonable as well, with most pints costing around £2.50. It also sells a good range of bottle-condition ales, bottled lagers from all over the world and a number of different ciders - and there's often a barrel of real cider loopy juice on the shelf. There really is something for everyone here (though some daft customers still order the Carlsberg in here). 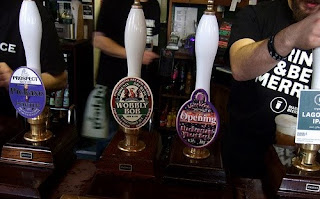 Marble Arch, Rochdale Road. (c) Lancastrian at flickr.
Also renowned is the food, which is freshly made on site, and is superbly presented and cooked. Whilst not something we are particularly interested in (eatin's cheatin') I'm told it's as good a pub grub that you will get anywhere. In fact, at times the Marble is so full of diners that drinkers are often forced to stand or even worse, forced to decamp elsewhere (as happened to us recently when not one but two coachloads of Burnley fans tipped up just as we were tucking into our pre-match scoops). 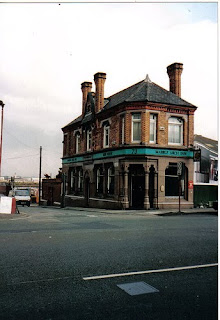 Marble Arch, Rochdale Road, 1990. (c) deltrems at flickr.
It's very much off the beaten track and is in fact our most north-easterly pub covered, a few hundred yards up Rochdale Road from the Swan Street / Miller Street junction. Our advice is seek this alehouse out at all costs, it's a cracking pub run by the best up-and-coming microbrewery in Manchester, and probably the country (judging by the awards that Marble beers so regularly win). In May 2010 the Marble's latest venture, 57 Thomas Street in the Northern Quarter, opened to a mixed bag of reviews, and in celebration of this the Marble lads have produced yet another new ale called- you've guessed it - "57".
Website: www.marblebeers.co.uk. 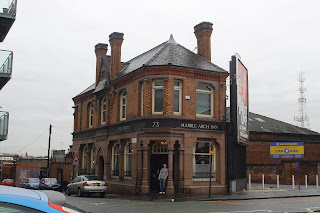 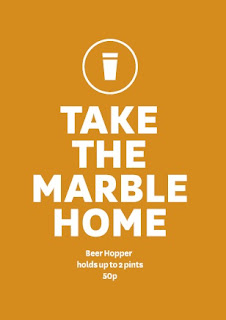