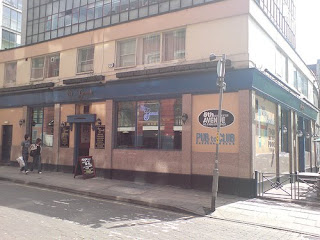 Garratt, Princess Street. (c) Mickaul at flickr.
Formerly the Old Garratt, this rather unattractive-looking pub has stood the test of time, mainly in part to its proximity to the 5th Avenue night club (formerly the famous Legends), a prominent student indie venue next door (and the old gone-but-not-forgotten Cyprus Tavern). The pub itself is now one large room with a little seating around the outside and a pool table in the corner which appeared in good nick considering the normal customers. Sadly no real ale these days, which wasn't really a surprise I suppose, considering its target audience. As the Old Garratt it was a semi-regular for us stop off en route to Moss Side for the match, and in the mid-late '90s it did some cracking ales - four pint jugs of Boddies cask for a fiver if memory serves. The interior was vastly different as well, with several interior walls giving a snug and vault of sorts, and a much cosier feel. The Old Garratt is shown here in 1970 and here in 1973. 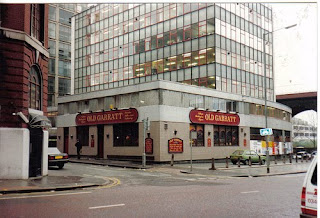 Old Garrett, Princess Street. (c) deltrems at flickr.
The pub itself is named after the former Garratt Hall that was situated on this site, before being cleared for the University campus buildings and of course the railway. 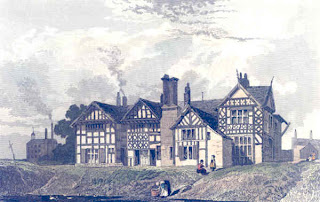 .
Garratt Hall, Princess Street. (c) antiquesmapsandprints.
The arches of the viaduct situated right next to the pub are 2 miles long and reputedly contains 50 million bricks! The Old Garratt originally sat a few yards down Princess Street (then Brook Street), nearer the railway bridge, and was run in the late 1800s by Jason Johnson. In 1905 it was already over a century old and Boddingtons Brewery wanted to upgrade it, and they already owned a beerhouse called Masons Arms on the corner of Granby Row. Boddingtons were granted permission to move the Old Garratt to the Masons, so long as they surrendered the Masons' licence and those of two other of their beerhouses. The ugly, flat roofed Garratt we know today replaced the original Masons/Garratt in 1963 [1]. Shown below is a photo of celebrating servicemen and ladies outside the Garratt on VE Day 1945 on 8th May. 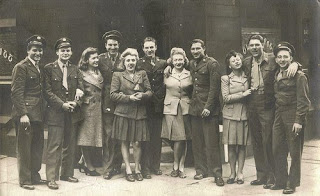