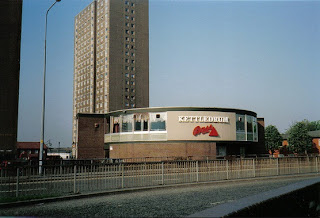 
This distinctive Bass house, the Kettledrum, on Heywood Way in Salford went against most conventions of pub building.  The living quarters were on the ground floor with the bar upstairs, and the pub building was circular, with offices to the rear making the pub semi-circular with a long straight bar within.  The Kettledrum was opened in December 1974 by Bass North West and lasted a quarter of a century until being demolished in 1999 [1].  It actually has a still-surviving sister pub in Stretford, The Drum (formerly the Bass Drum; sadly closed as of 2013), on Chester Road which will be familiar to many south Mancunians and United fans (the outside, at least). 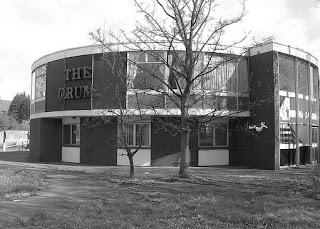