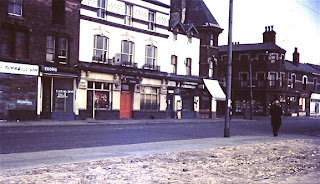 The Buck Hotel was opposite the Wilton half way down Cross Lane, one door down from Liverpool Street.  In 1869 the Bucks Head beerhouse opened, with owner Edwin Done obtaining a full licence two years later despite the claim by neighbour Rev Clarke that there were already too many pubs and beerhouses on Cross Lane [1].  In 1888, the famous Buffalo Bill cowboy who'd been performing his Wild West Show at the racecourse, had been drinking in the Buck before he fled his cab fare back to his hotel.  The subsequent fine meant that Broadway would not be renamed Buffalo Bill Way in his honour [2]! 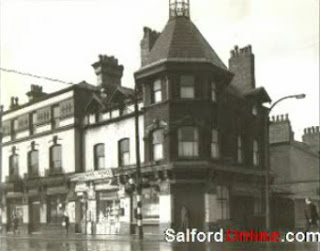 Taylor's Eagle brewery had the Buck in the late 1800s and the Openshaw Brewing Company had it until the 1950s (advertising Walkers Ales and Jubilee stout, below) when it became a Bass Charrington house. When the Buck closed in 1975, barmaid Vina Lewis had been pulling pints in the pub since the 1920s, making her one of the longest serving barmaids in Manchester and Salford.  The council bought the pub in 1975 for £47,000 as the street was demolished for redevelopment [1]. 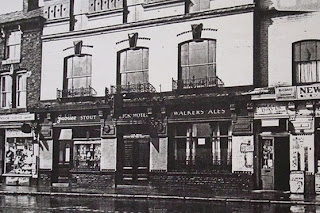