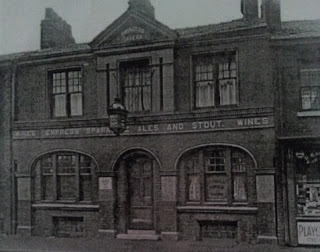 The Princess Tavern used to face the Gresley Iron Works at the top of Ordsall Lane between Crookell Street and Seddon Street.  Today this site faces the McDonald's at the junction of Regent Road and Ordsall Lane.  The Princess Tavern is first listed in 1845 and from the 1870s until it closed in 1936, the pub was owned by the Ancoats brewer, Joseph Boardman.  This didn't stop the Princess offering other beers though, with Boddingtons beers and stouts, bottled bass plus fine wines and cigars advertised.  Shown above as an Empress Brewery house in the 1920s, it was a Walkers house until its demolition when Salford Corporation cleared the Ordsall Lane slums to build the Regent Flats (to the left in the below view).