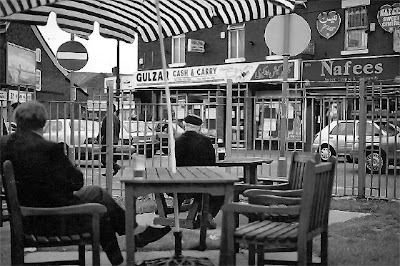 This was an odd one - a Wetherspoons that got it wrong and failed.  The Sir Edwin Chadwick, named after a local Longsight hero and hack, was housed in a new unit on Stockport road at the south end of Longsight, just south east of Dickenson Road.  However, Wetherspoons badly underestimated how troubled this area can be at times, and it was quickly closed and written off as a bad mistake after 'Spoons boss, Tim Martin, reportedly took one look at the place saying "get rid!" [2].  The wonderful photo above from @johnrisby shows a couple of old boys boozing in the old Edwin Chadwick beer garden [1], which is now this wasteland car park next to the curry house that has replaced the pub.