Alan Winfield, generous contributor of a number of great of photos of estate pubs for this blog, has kindly written about his 1990s tour of Manchester pubs.  You can see the many, many pubs around Manchester and beyond he's visited (almost 3,000 and counting) at Pubs Galore.  Alan can also be contacted by email. 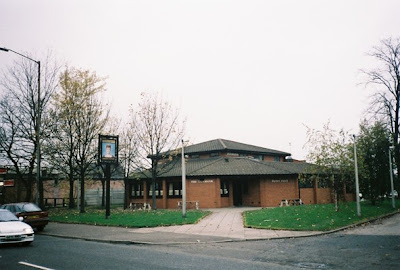 
I started pub crawling in the early 1980s with two of my mates.  We had a knack of finding pubs and we ended up doing every pub in Nottingham plus most towns to the west of Nottingham.

When it got to the late '80s I became interested in Joseph Holt's brewey and other independent breweries.  So I wrote a letter to Holt's brewery around 1989 and they kindly sent me a list of all their tied house.  This gave me a good starting point for doing pubs in Greater Manchester.  After a while I thought I would like to do every pub in the city of Manchester so to get more information I subscribed to What's Doing (North Manchester CAMRA newsletter) which gave me a lot of pubs to do in North Manchester. 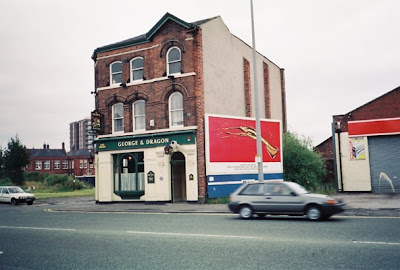 After a while What's Doing started doing printed A4 sheets of pubs in North Manchester and Salford.  This included all pubs not just real ale pubs, so I was pretty confident about doing all the North Manchester pubs.  However, East Manchester and South Manchester were a lot harder as I had no lists or information to work off.  So it was my usual way of finding new pubs - each pub I went in I asked if there were any other pubs nearby, and as I kept asking I gradually worked my way round Manchester.

I have numerous favourite pubs in Manchester and not surprisingly they are usually old Holt's tied houses with a few different rooms to suit all tastes.  I really liked the White Lion in Eccles which looked like a proper old pub from the outside and was just as nice inside with a few different rooms.  My favourite Manchester Holt's house is probably the Duke of Wellington in Higher Blackley. 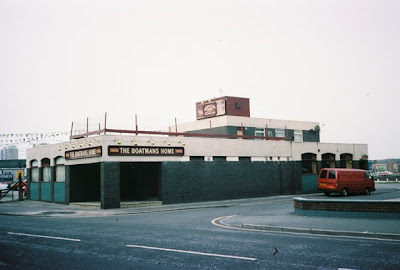 My least favourite pubs are one that seem not too pub-like or seedy pubs.  The ones that spring to mind are the Parkland in Collyhurst, a very seedy place that I didn't like at all.  The other one is the Imperial in Blackley which didn't look like a pub and didn't have a proper pub atmosphere.

-  Iron Duke, Hulme - in such a dire area and looked pretty rough.
-  Brass Handles, Salford - had a great backdrop of high rise flats.
-  Clarendon and Queens, Collyhurst - intimidating and dilapidated. All my pub crawls are listed in notebooks so I still know which order I did these pubs all those years ago.  When I was on a pub crawl round Salford I had a drink in the Carlton in Lower Broughton.  When I left to go to the next pub, which was the Royal Archer, I realised I had left my pub notebook in the Carlton so I had a quick half and went back for it.  I went to where I had sat and my pub book had gone, then a big group of blokes who were sat opposite me said "is this your book?"  When I said yes, they said that couldn't believe how many pubs I had been in on my different pub crawls.  They were very impressed...
(c) Alan Winfield, reproduced here with kind permission. 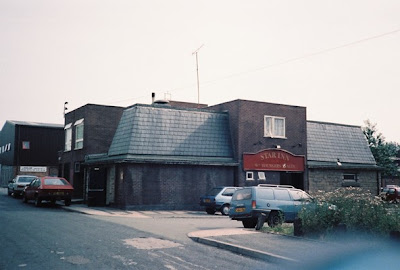