The price you paid to hear it was generally measured in pints, but what you got in return was a rich unfolding of tales of men (almost always men), women (almost always behind the bar), rivalries, breweries, places and above all changes. Change was always at the heart of these stories - an old world slipping away and being replaced by a shiny new one.

And the shaman who presided over these stories, the men who had spent a lifetime recording and remembering and retelling these tales were red-faced, slightly dishevelled men who not only drank in pubs, but lived in them. My dad was one of those shaman. The clothes he wore were often bought from men who went from pub to pub with a van out back. The meat he ate often came from a similar source. He knew names of landlords, barmaids, owners. He knew which local hardmen to avoid and which to talk to. He knew which pubs had jukeboxes, had pool tables, had darts teams. He knew pubs.

And for me as an adult, my increasingly rare drives around North Manchester are punctuated by the pubs that he drank in at different times of his life, as his aspirations and friends changed. It is impossible for me to drive past a pub without it prompting some involuntary recollection that I never knew was buried in my mind. 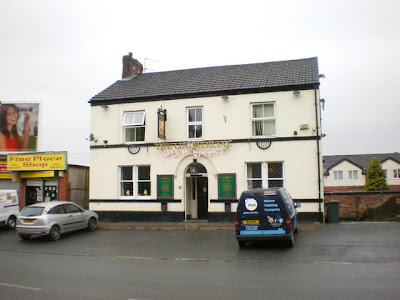 For me pubs are more than places you drink in. When your dad is a pub shaman they are places you grow up in. Just as he grew old in them. I remember being about 13 and being taken to the Commercial on Bury Old Road opposite Heaton Park. I think it was a Tetley's house which was unusual in Manchester in those days. My dad knew the landlady.  In the days before early opening I remember her throwing him the keys to the pub's front door from the top window and telling him to let himself in and help himself to a pint. In those days he always bought me two drinks - a coke and a half of beer. One was for me to drink the other one was for show. Never really quite understood which way round that was meant to work.

My parents had split by this stage. Not saying that with any sadness or self-pity - just a fact. Even by then my mum knew that pubs had won. In the days before mobile phones, once he had moved out, there were three numbers for him in our phone book:

The last one on the list was the number we'd call first, waking the taxi-card-covered plastic public phone by the side of the bar. Any of the bar staff would know which of his three young children were calling and would locate him. So before I was ever allowed into a pub I was considered pub family. 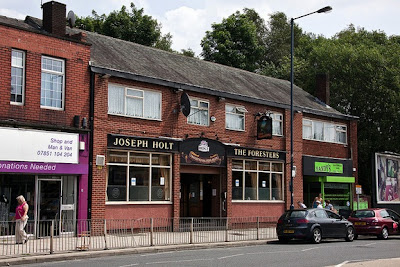 Foresters. (c) Ingy the Wingy at flickr under Creative Commons.

As I got older the Commercial gave way to the Foresters on Bury New Road, a squat ugly pub that blended in to the buildings around it as if afraid that being noticed would bring in unwanted strangers. The Foresters landlord was Geoff, a man who turned so many blind eyes you wondered if it was pragmatism or apathy which drove him. I once remember a man who claimed to be a taxi driver trying to sell us a driving license and a birth certificate. There wasn't much that couldn’t be bought in the Foresters.

The Foresters was a grunge pub about 5 years before Nirvana ever took to any stage. In the early years of Care in the Community its customers often flitted between the local sprawling mental hospital ("largest in Europe") and the pub like the lost souls that they undoubtedly were. There wasn't much to the pub. A dirty vault with pool table and wall mounted jukebox. He always played three songs - Fats Domino's Blueberry Hill, Itchycoo Park by the Small Faces and Kenny Rogers' Ruby. This is 25 years ago. I can't remember much but I remember that.

As well as the Care in the Community crowd, The Foresters had some distinguished drinkers too - although in their own way they were also lost souls. Mark E. Smith drank in there. So did Nico, who sang with the Velvet Underground and lived out her final years cycling around Prestwich on her push-bike, stick-thin and white like a ghost. The pub drew her to it as it drew my dad to it. The Foresters was a place where because no-one fit in, everyone fit in.

Looking back having an ex-member of the Velvet Underground drinking in the same nondescript pub as my dad was pretty remarkable. Not to the customers though. 90% of the people in the pub didn't know who she was. The same 90% who knew exactly who my dad was. That's what was great about those pubs at that time. They were democratic. By putting in the hours you could get yourself known and accepted. 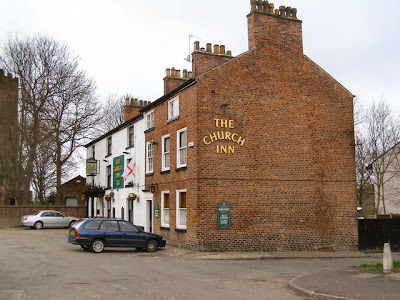 At some point in the later 1980s he flirted with gentrification - the Church Inn down Church Lane in Prestwich - now a food-serving pub, but even then a place which had some aspirations to being a bit of the countryside in town. Different place. Different friends. More middle-class. More professional. Which is what he was. But never what he wanted to be, or came to terms with being. Didn't last long at the Church. I think to him the people down there were playing at drinking. Slowly sipping a couple of pints on a Sunday afternoon, laughing and telling jokes with friends. Not the solitary pint in a smoke-filled vault pouring over a fixed odds coupon and going through a packed of Bensons. That's what he preferred.

In later years, once drink had him firmly in his grip, he settled. It was the Red Lion on Bury New Road. His feet weren't good. Had to be walkable. Had to be Holt's. That was his last local really. His elephants' graveyard. In 2004 he died.

It was the drink that did for him of course. No shame in that. Something gets each of us in time. And no one was surprised it was drink. After all, he was a shaman of the pubs of North Manchester. Comes with the territory. He wasn't the only one. There were others. They knew each other, though often not by name. They acknowledged each other with silent nods. One by one they have disappeared.

Drinking isn't like that any more. Drinking is now leisure, not work. The shamen are all dead or dying. Replaced by aggressive kids or bored couples. The rest of us just pour a glass of wine at home. And pubs get boarded up or sold or burnt out or demolished. They change interiors each year to try and remain interesting - but that has the exact opposite effect. Besides, the people who made them interesting are gone. And most of the stories have gone with them. 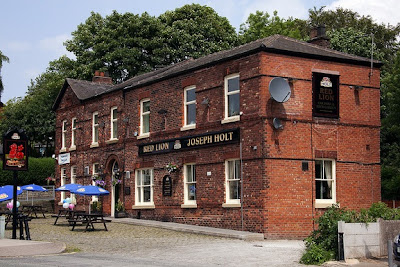