The Lorimers Arms is an other closed inner city estate pub on Osborne Street in Collyhurst, between Oldham Road and Rochdale Road.  It has been put to alternative use, this time as Lorimer House, the 'Fountain of Life Christian Centre', according to Google Maps.  It's a sad comment on the viability of inner city boozers, not to mention on the communities themselves, when minority religious headquarters are preferred to hubs of communities - pubs!  The Manchester pub crawler, Alan Winfield, photographed the Lorimers Arms in February 1994 as a Vaux house, as seen at Pubs Galore. 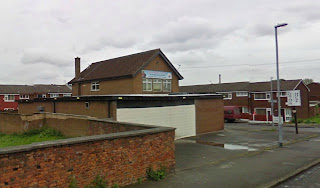