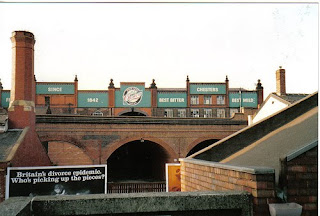 Threlfalls-Chesters Brewery, Salford, 1990. (c) deltrems at flickr.
Chesters had a long, proud history in Manchester, brewing from 1830 to 1999. They were originally based at the Victoria Brewery, Hyde Street, Ardwick. The brewer moved to the Ardwick Brewery in 1852 as depicted here just after it opened. In 1961 Chesters merged with Threlfalls of Salford and the Ardwick Brewery was demolished in 1966, but not before it was snapped in 1964, showing the Britannia Inn on site. Whitbread soon took over the Threlfalls-Chesters brewery and for a few decades, both ales were brewed in Salford where the brewery bore both names. Chesters bitters, milds and stout were brewed at a number of Whitbread sites towards its end, then contracted to Burtonwood and Everards, but sadly all production stopped in 1999 [1]. I remember our old granddad used to warn us of the dangers of Chesters Mild, saying it could turn you into a "Chesters case". Not sure what he meant by this, but the mention of Chesters Mild to drinkers of a certain age often brings forth a few interesting tales. 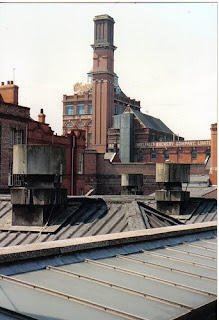 Threlfalls-Chesters Brewery tower, Salford, 1990. (c) deltrems at flickr.
Like Kays Atlas, the original Chesters Brewery in Ardwick was close to Manchester City Football Club, the brewer part-owning the Hyde Road stadium. Hyde Road's first seating area was paid for in part by Chesters in 1888, who funded 1,000 seats in return for being the sole distributor of alcohol in the stadium (sounds like a good idea; maybe one of Manchester's fine breweries fancy supplying us with decent ale at City, instead of the undrinkable John Smiths Smooth, Fosters and Singha?). Such was the close link between club and brewers, A.F.C. Ardwick (later to become MCFC) were nicknamed 'The Brewerymen'. The Crown & Cushion at the top end of Corporation Street was a Chesters house, and the brewery paid for its rebuild in the late Victorian period. Other old Chesters houses in town still remaining include The City, Oxnoble, Crown & Anchor and the Sir Ralph Abercromby. 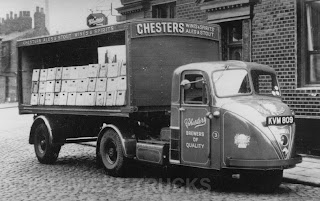