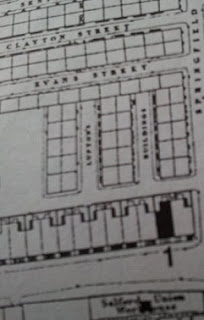 
At the Greengate end of Broughton Road (now Blackfriars Road), the Paul Pry beerhouse was next door-but-one to the corner of Springfield Lane, opposite the Salford Union Workhouse.  It was first recorded in 1840, but by 1864 it had a new, more unusual name, the I Hope I Don't Intrude Inn, which was one of Paul Pry's lines in the John Poole play of the same name. The beerhouse was owned by the Adamthwaite family, whose firm Lupton & Adamthwaite part-owned the Cook Street Brewery before Threlfalls. Watson & Woodhead brewery leased the Paul Pry before Walker & Homfrays had it for the last two years until its closure in 1916 [1].
1. Salford Pubs - Part One: The Old Town, including Chapel Street, Greengate and the Adelphi, Neil Richardson (2003).
at 14.1.12