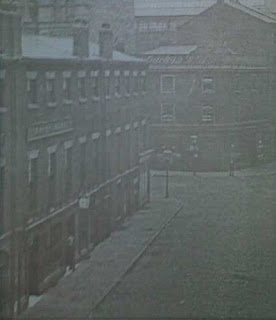 
On the site of the old bus station, and before that, the Exchange Station approach, the Red Lion sat at the bottom of Chapel Street on left as you looked up the road.  The Red Lion's licence was first recorded in 1742 and by 1840 had "a bar, parlours, dining room, a large club room, twenty beds, stabling for forty horses and two lock-up coach houses [1]."  With entrances on Victoria Bridge and Chapel Street, it was big hotel, renamed the Raven Hotel in the late 1860s when it was rebuilt, as shown above. 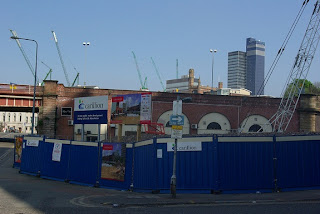 By the 1930s, Boddingtons Brewery leased the hotel of owners, the London, Midland & Scottish Railway and when Salford Corporation acquired all the land between Cathedral Approach and Victoria Bridge Street for the building of the bus station, the Raven Hotel's licence was sold to Threllfalls Brewery.  They immediately transferred it to a beerhouse of theirs and the Raven was demolished [1].  The old site of the Red Lion / Raven Hotel is roughly where the car park sign is, below, looking from the bottom of Green Gate [2].