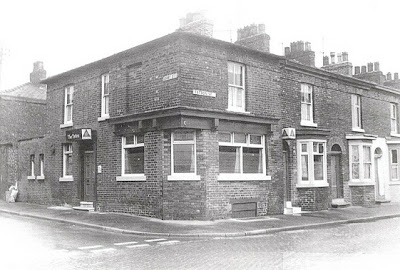 
Pictured above in 1972 around the time it was closed and knocked down, the Tatton Arms opened in 1866 on the corner of Derby Street and Tatton Street, just off Oldfield Road, passing into the hands of Hardy's Crown Brewery by the 1890s.  The wonderful photo below shows landlady Sarah Howard and family members outside her beerhouse (which sold wines, but not spirits), the Tatton Inn, in 1905 [2].  The Tatton became a Bass house for its last few decades but closed around 1972 like most of the Ordsall pubs and beerhouses.  If you extrapolate the remaining part of Tatton Street west towards Oldfield Road where it once ran, where it meets St Bartholomew's Drive today is where the Tatton would have stood. 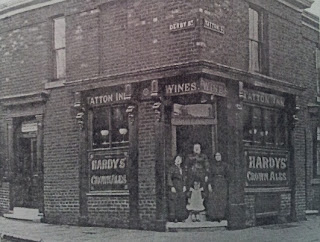 
Graham Marsden takes worked at the Cornbrook Brewery as an apprenticed Joiner in the 1960s.  One of his jobs was to visit on foot a number of the company’s public houses in the Ordsall area putting up 'Canada Dry' signs:  "As I came across Mark Addy’s bridge over the canal it was the first call on my list.  I note on the picture that it was still in place screwed to the wall by the entrance. On one occasion I visited the property with my Foreman Arthur Smith.  I remember Arthur saying how highly respected Harriet Hindley was by the brewery as the consummate professional landlady.  I was hugely impressed by the cleanliness of the bar, the Britannia tables, bentwood chairs and any other wood visible was polished to perfection and was a standard that the brewery reps often held up as an example that other pubs should aspire to." 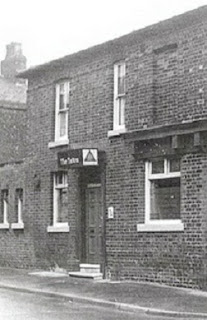 
"I would only add that sadly the old Mark Addy’s bridge has gone as well.  It had a marvellous Dickensian look about it with its old winding hand worn rail and deeply hollowed stone steps that admittedly in this day and age would be classed a death trap.  Sadly missed all the same - it took many years of Mill workers' feet passing over it to get in that condition and like the Tatton Inn was an important piece of local history."  Thanks to Graham for these great memories.