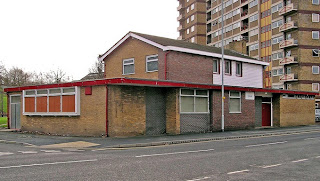 
The Druids' Home was a popular late 1960s Salford estate pub, built by Wilsons Brewery to replace an original Druids Home, on Silk Street just off Blackfriars Road - at least it was in the mid '70s when the Manchester Pub Guide covered it [1].  Cabaret turns, loud music, a young clientele, garish wallpaper and plastic seating in the large front lounge bar complemented electric pumped Wilsons bitter and mild, Carlsberg, Watney Red and Guinness.  A haven to the rear was the vault with darts and dominos, the Druids Home was described as "the pinnacle of the modern housing development style" of pub [1].

In the early 1980s, the Druids' Home turned into a Samuel Webster house and a few years later Banks's Brewery owned it.  Closing in 1987, Banks's soon announced that they had given up the licence for the Stowell Spire on Howard Street / Eccles New Road.  Although no longer a pub, the Druids Home still lives on today as a youth centre. 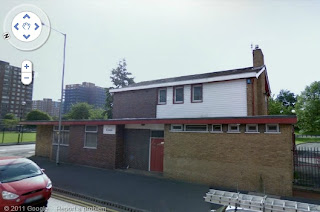