Where Whitworth Street West now runs past Deansgate Locks used to be the narrower Gaythorn Street, skirting the canal.  The first street off Gaythorn Street was Cheetham Street and the lower end of it survives today as Cameron Street.  In 1800s the Cheetham Street was a bit longer than today's Cameron Street and the Carder's Arms sat on the corner.  That puts its location as in the space immediately in front of the empty warehouse shown below. 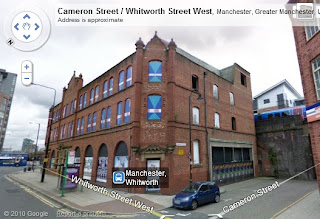