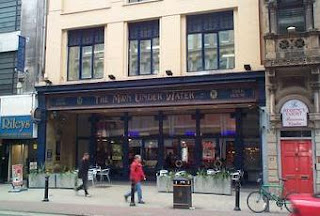 Moon Under Water, Deansgate. (c) beerintheevening.
Opened in 1995 in the former Deansgate Cinema, the Moon Under Water was described at the time as the biggest pub in Britain and was regarded as something of a flagship pub for the rapidly growing Wetherspoons chain.  In fact in its first few years it was the place to be seen for us impressionable young drinkers.  I doubt that is still the case, because just 15 years it's now turned into one of the biggest fleapits in Britain, of that there is little doubt.  Where once were proud staircases, fancy interiors, handrails and balconies are shabby carpets, drab interior and the sort of clientele that would put the Printworks to shame.  Indeed, more than likely, this is where the people kicked out of the Printworks congregate. 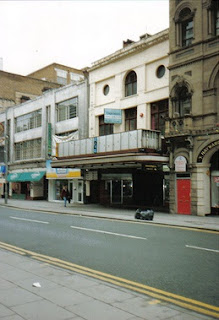 The whole place looks rundown and has clearly been taken over by the chavvy drink as much as you can for as cheap as you can trade.  I suppose for Wetherspoons, it makes them money, and possibly keeps them out of their other better establishments, for the casual drinker though, it's a hell-hole.  As for beer, real ale was in existence, however I wouldn't have thought it was much of a seller in a place undoubtedly dominated by the young chavs drink of choice,  Fosters, Stella and Blu Wkd.  Very much a case of drink up and piss off as quickly as possible if you're unlucky enough to be dragged in here.  Wonder how George Orwell would compare this Moon Under Water with his favourite pub?
at 12.10.10