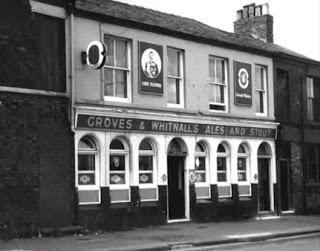 
On this plot to the left of the modern building on Great Jackson Street was the Lord Napier public house.  The pub was only demolished in 1986 and was previously a Groves & Whitnall house, the Boilermakers Arms.  Just off the very top end of Chester Road (in the distance), the street that runs down the side of the office building is known as Silvercroft Street - simply Silver Street in the past - and on that corner used to be a chapel which would have been next door to the Lord Napier into the 1930s at least [1].