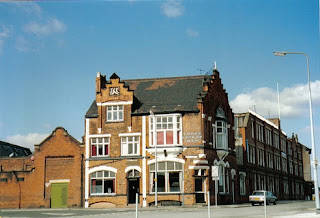 
The original Legs of Man dates back to 1793 when Michael Hunt opened the pub adjacent to cottages he'd built in Hunts Court on the corner of Gravel Lane.  The pub was listed as the 'Legs of Man and Imperial Wreath'  in the 1830s-'40s then the Three Legs of Man from 1850.  Atlas Brewery took the pub in 1867 and James May who took over at Atlas Brewery also became owner of the Three Legs of Man.  May then demolished the original building (shown below, centre) and built a more ornate boozer which Robinsons took over as part of the Kays Atlas deal in the 1920s. 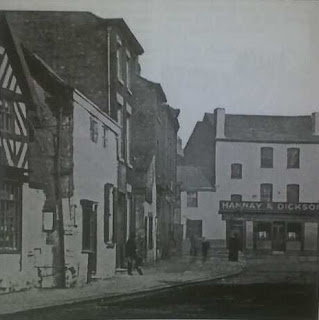 
As a Robinsons pub in the 1970s, the Three Legs of Man was well run with an enthusiastic landlord but was "a victim of planning" (like much of Salford).  Another pub with former glories as evidenced by several large rooms - a vault, an unused stage, lounge, games room, tabled corridor and hotel rooms.  Robbies bitter and mild were served on beer engines along with keg Cock Robin and Guinness.  Robinsons sold the pub in 1994 to Barry Johnston who reopened it as the Cornerhouse.  It lasted about six years into the new Millennium but closed soon after, being demolished in the mid-'00s to make way for the ugly Abito Greengate development. 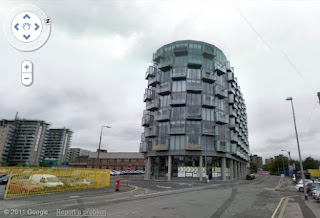