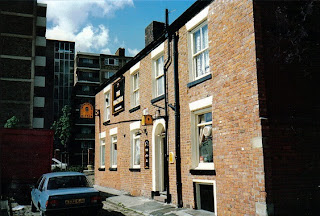 The Braziers was a basic, boisterous, back-street Boddies house just off the Trinity Way ring road in Salford, tucked away down Hodson Street off Blackfriars Road.  The interior was a classic vault, bar parlour and smoke room layout and the whole place had been redecorated about the same time as the above photo was taken [1].  This is confirmed by the 1975 guide which had previously described the Braziers as a "slightly tattered" workingman's pub, with the only ale being cask Boddington's, in addition to Heineken and Guinness [2]. 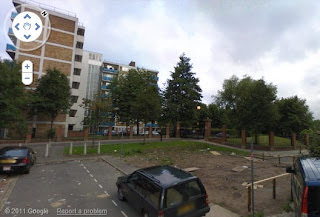 Former location of the Braziers, Hodson Street, Salford. (c) googlemaps.
The Brazier is shown on the 1848 Ordnance Survey map of Salford [3], although Hodson Street then just a straight road rather then the hook-shape it is today due to the creation of Blackfriars Road, Trinity Way and the flats in the background of the above photos.  The pub was demolished not that long ago (judging by the websites it's still listed on).  The aerial view of the area still clearly shows the footprint of the Braziers in the top-left of the below shot. 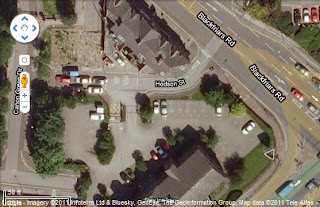