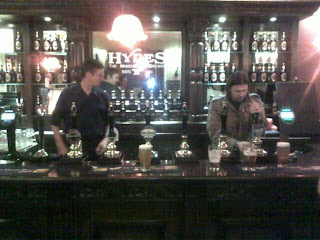 
The Brewery Tap at the Queens Brewery is in Moss Side, a mile south of the city centre, just off Princess Parkway not far from the huge Royal Brewery.  The pub isn't open to the general public, but employees, drivers, visitors and guests on the highly recommended Hydes Brewery tour can enjoy Hydes fine ales in their little bar.  It is tucked away towards the rear of the site, meaning the whafts of malt set the taste buds flowing as you pass through the plant.  Then it's a steep climb up the antique steps and into the traditional bar which is bedecked in Hydes memorabilia including ancient bottles of pale ales, stouts and even old cans and party kegs of bitter. 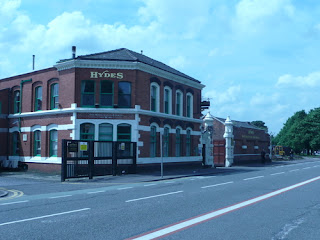 Hydes Queens Brewery, Moss Lane West. (c) wikipedia.
On the bar are the standard Hydes ales - Bitter, Jekyll's Gold (a golden ale) and the new Manchester's Finest (their premium bitter) plus the obligatory smoothflow and lager (Harp, brewed under licence from Diageo AKA Guinness).  Although Hydes also brew Boddington's cask under licence, its absence this time was no shame.  The Jekyll's Gold and Manchester's Finest seemed to go down best, and pint after pint were pulled by Alex the barman/tour guide and by our own fair hands, before and after the tour.  For £7.50 and *ahem* at least four pints apiece, you'll not find a cheaper pint in Manchester.  The chance to sup top quality Mancunian ales from their source shouldn't be missed - www.hydesbrewery.co.uk/html/tours.html. 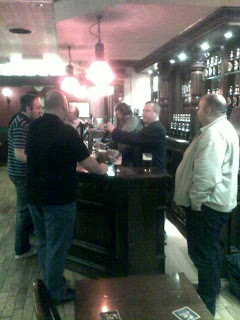