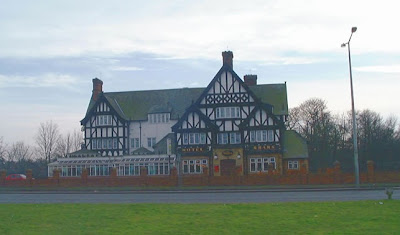 
One of the last of the original Wythenshawe inter-war estate pubs (only the Yew Tree building stands today), the Royal Thorn survived until 2001 before being demolished to make way for an ugly office block.  It stood on the south side of Altrincham Road opposite the bottom of Netherwood Road at the Princess Parkway roundabout at Sharston. 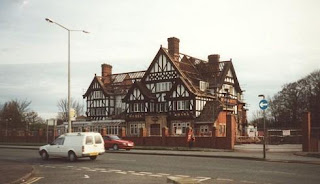 The Royal Thorn is pictured twice in 1959, close up in 1971 and in the distance with the Wythenshawe Adult Training Centre (now upgraded to an Open University site) in the foreground.  The pub was named after the Ryle Thorn inn which once stood here; itself named after the area which was known as Ruyul or Ryle Thorn in the 16th century.  In its final years, the Royal Thorn was renamed the Royals Hotel but is shown here being pulled apart in 2001. 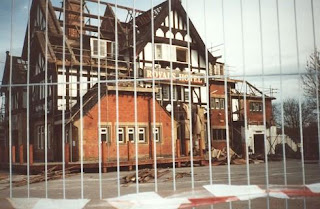 Who says Manchester City Council don't respect the city's history? They at least paid lip service to the history of the old pub by naming the office block The Royals.  In the years I've been passing this building twice a day, it's never been fully occupied.  The same cannot be said of the Royal Thorn over the decades, once a busy boozer serving this corner of Manchester's "garden estate" of Wythenshawe.