Although "Europe's largest council estate" (still a claim to fame?) is at least 8 miles south of the city centre, Wythenshawe's inhabitants are largely generations of inner-city families who were moved on during slum and inner city clearances.  Manchester's sprawling "garden city" started being built in the 1920s and soon there were pubs built to serve the incoming populations.  Some of the first boozers were grand public houses built at strategic locations around the nine districts of Wythenshawe - the Yew Tree (Northern Moor), the Royal Thorn, the Royal Oak (Baguley).  Sometimes they were sometimes simply named after their district - The Newall Green, The Sharston, The Benchill.

The Benchill sat on the Hollyhedge roundabout in the centre of Benchill, and in its day was a heaving Threlfalls then Whitbread pub which developed a slightly unsavoury reputation over the years: 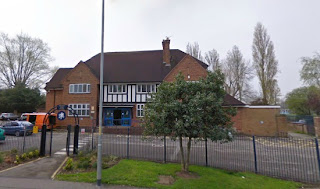 When the Benchill closed - at some point in the last decade or two - it became a housing office, although it was finally demolished just a few months ago in Autumn 2012.  The Benchill Hotel opened in 1936, and a Manchester Evening News article of the day, transcribed at the Manchester Family History Research site, contains some evocative descriptions of the newly erected pub:
1. http://forums.bluemoon-mcfc.co.uk/viewtopic.php.
2. http://manchester-family-history-research.co.uk/new_page_12.htm.
at 20.11.12