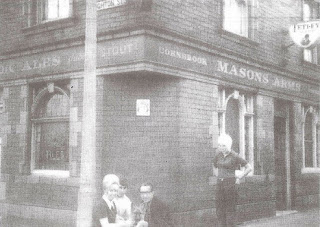 
The Masons Arms stood from 1874 to 1971 on the corner of Brighton Street and Robert Hall Street in Ordsall.  The first licensee of this Hardy's Crown Brewery beerhouse, Grace Megson, had her licence transferred from the old Masons Arms on Chapel Street.  The tenant during WWI, Samuel Torkington, almost lost his licence due for allowing "treating" (buying someone else a drink, which was illegal during wartime).  The Masons passed to Cornbrook, then finally to Bass Charrington when it closed in 1971 for development [2].  Brighton Street has gone, but the old location of the Masons Arms is opposite the Royal British Legion on Robert Hall Street.