Situated on London Road in front of the new entrance and taxi rank of Piccadilly Station, the Bulls Head has become a regular first or last stop for thirsty travellers. To say that this was its only benefit would be unfair though, as this pub has been restored to a high standard, and now always has a good selection of real ales on at all times. This has encouraged more real beer drinkers and whilst its prices are not particularly cheap (probably due to its location), the beer is always well kept. 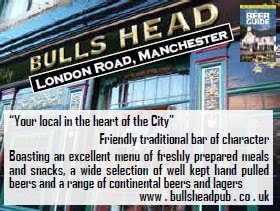 Some older pictures of the Bulls Head from 1902 here and here, and the '70s and 1991 show it as a Wilsons and a Burtonwood pub. It opened in 1786, and the licensee was Maria Lowcock in the late 1800s and in much more recent times in the 1990s it used to keep modest opening hours in the evenings only. Now owned by the Marstons group (who acquired Burtonwood in the '80s), Pedigree and Banks are usually always on, together with four or five other guest ales. Certainly worth a trip for the more discerning beer drinker.
at 17.1.10