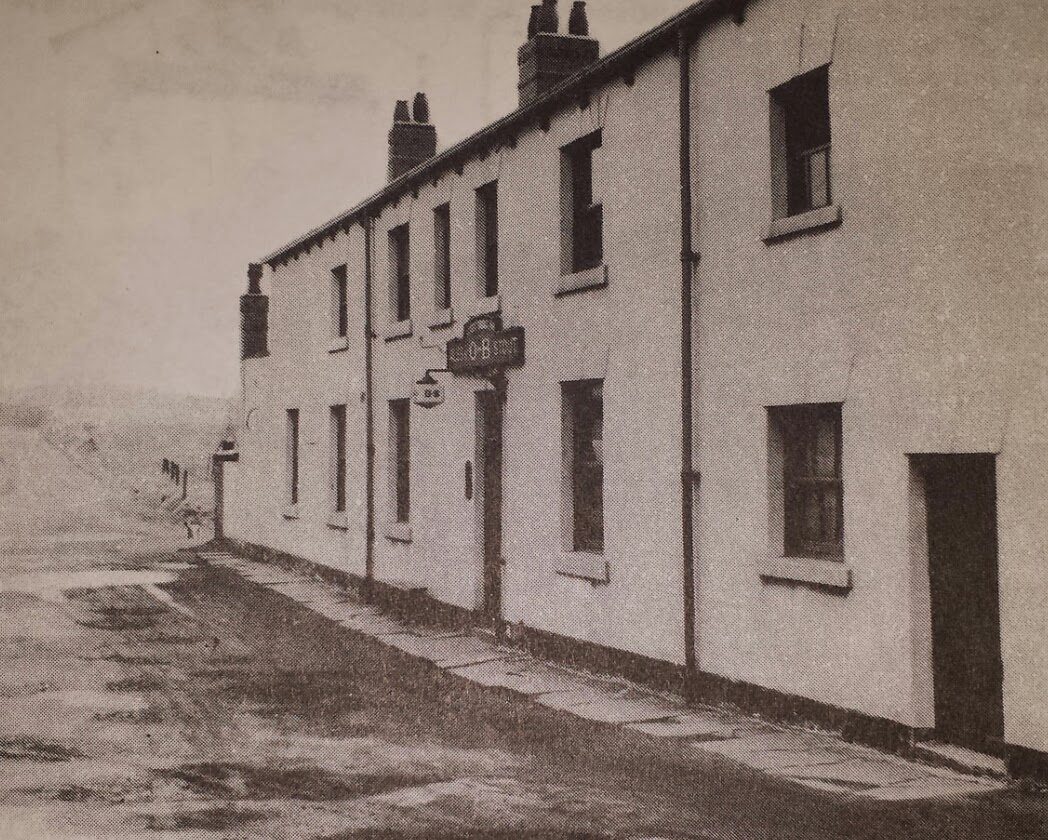 
The Streetbridge Inn today is a 1980s estate-style pub on the Failsworth-Hollinwood border, but the original beerhouse dates a lot further back, to at least 1861, when it had been farmhouses.  The Streetbridge Inn was named after the Roman Road ("the street") and the bridge over the nearby canal.  The beerhouse was bought by Oldham Brewery in 1901, and by 1925 was hosting Manchester & District Whippet Club dog races out the back.  The Streetbridge got its full license in 1960 and so it remained until 1983 when Boddington's took over Oldham Brewery and decided to rebuilt the pub close by.  The original pub was demolished and became the car park for the new boozer [1].  Meanwhile, the Roman Road was tarmaced, the bridge was removed and the canal was filled in [2]. 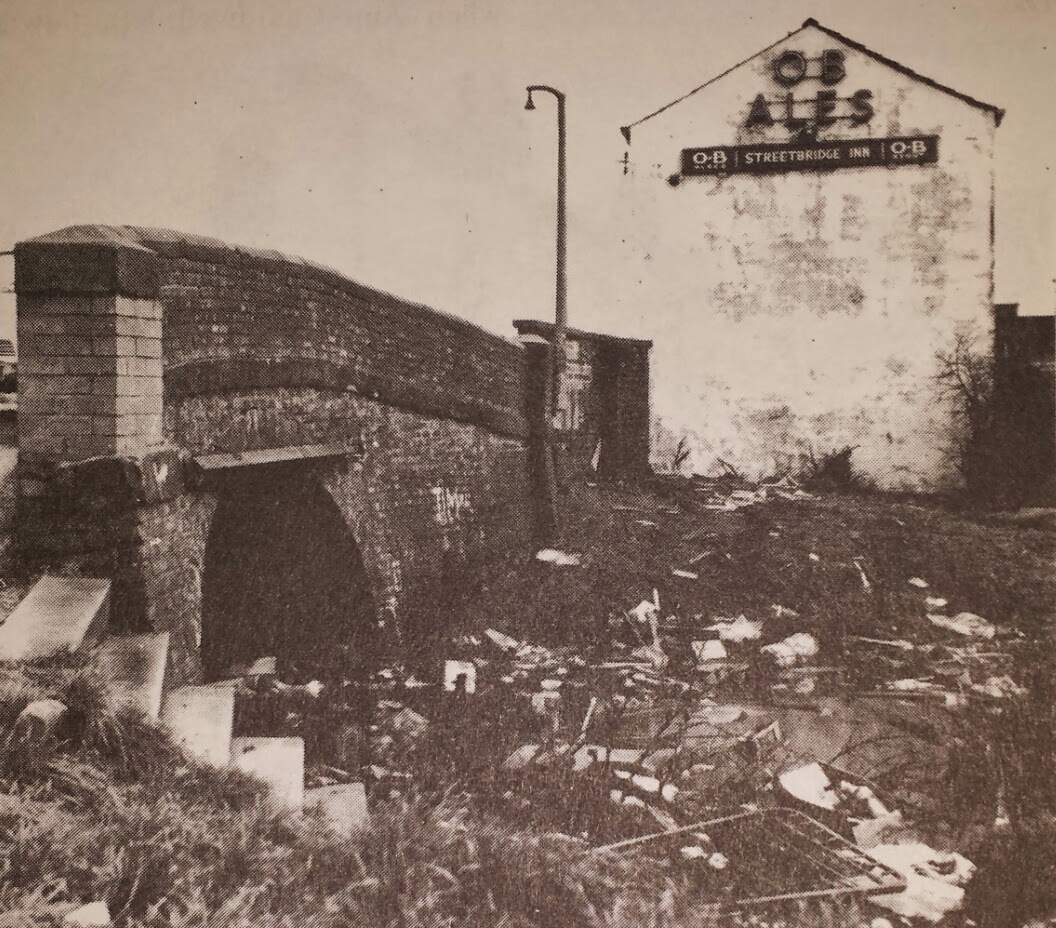 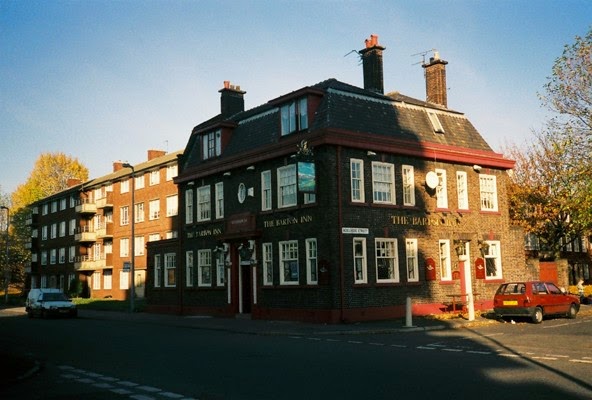 
The Barton Inn stands on the corner of Adelaide Street at No.11 Cawdor Street in Eccles.  It can be traced back to 1887 when the license of the Southgate Inn in Pendlebury was transferred to two houses in Cawdor Street, which was converted into the Barton Inn [1]. 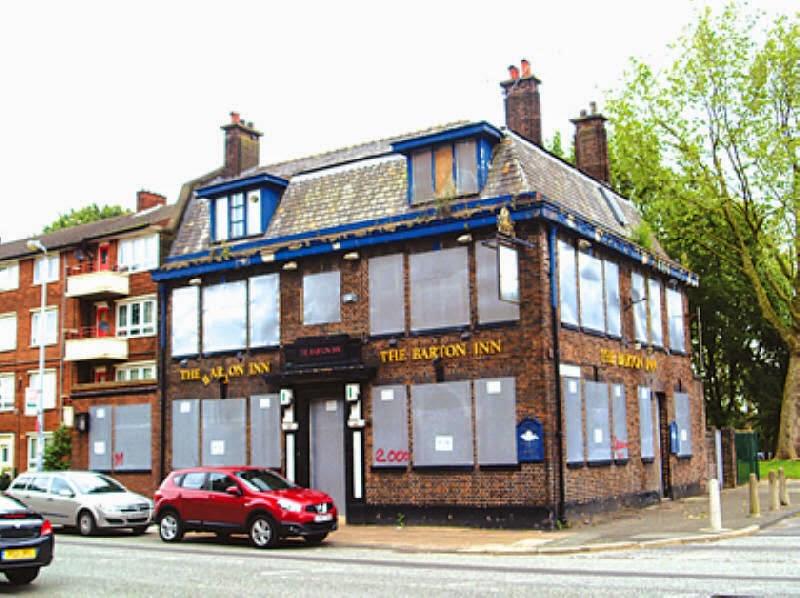 By 1905 the Barton Inn was headquarters of the Springfield Football Club, which later became Eccles Borough A.F.C. [1]. 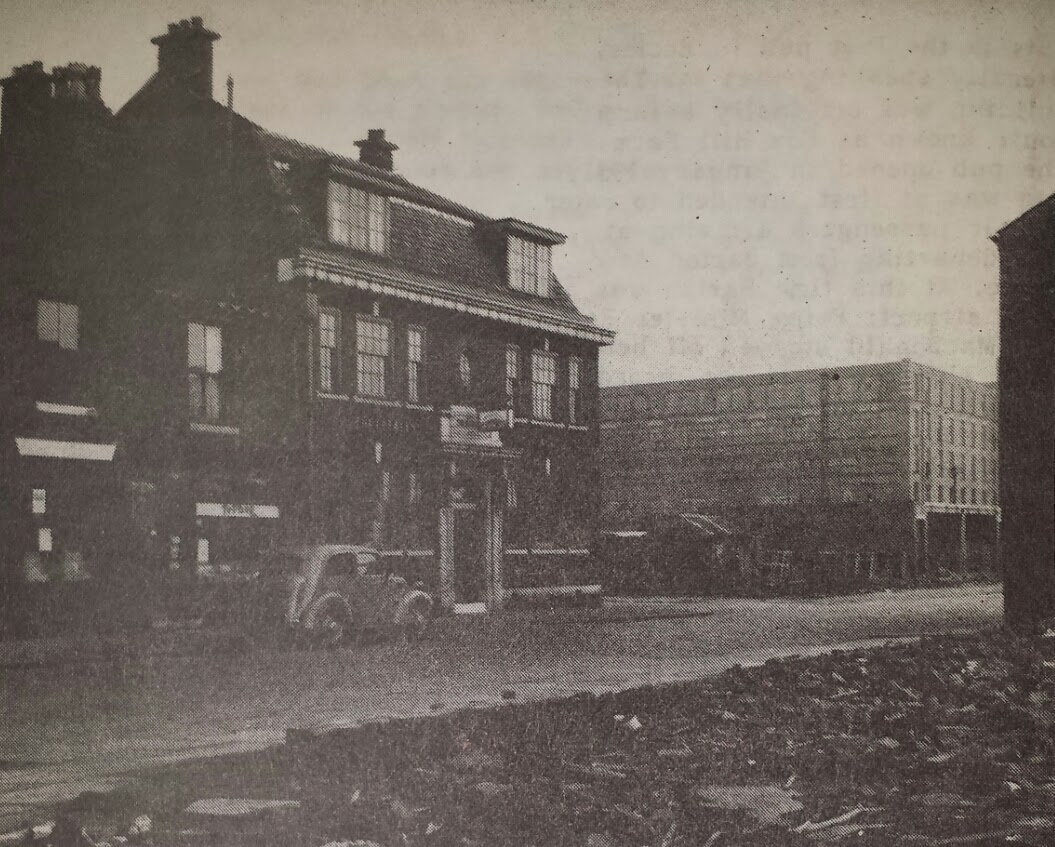 A full license was only granted to the Barton Inn in 1949 as a Threlfalls house, an in 1967 it passed to Whitbread as they took over Salford's Threlfalls Brewey.  It remained a Whitbread's Chester's house, offering Chesters and Boddies bitter in the mid-90s [2]. 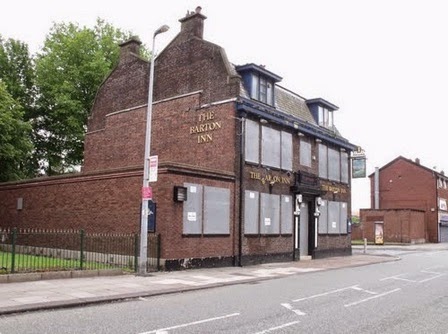 The Barton Inn shut in the 2000s and remains closed despite being surrounded by flats and potential customers. 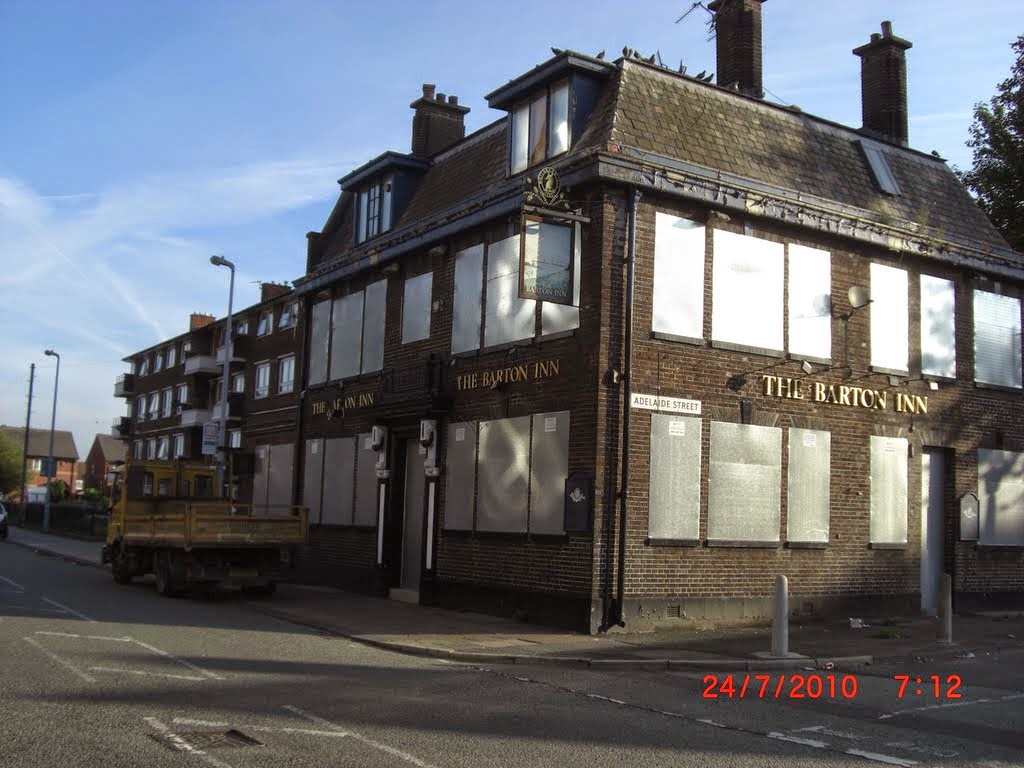 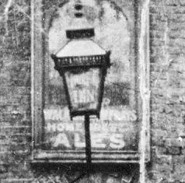 The Paul Pry beerhouse was tucked away on West Street off Crab Lane in Blackley, opening in 1830 after the Beer Act was passed.  Although beer was brewed on the premises, there were no beer pumps, so beer was brought in jugs from the cellar.  Walker & Homfrays took the Paul Pry in 1888, as seen in 1905, and just before the First World War, the licensee of the Old House at Home was also in charge at here.  The Paul Pry closed in 1923 and these days Blackley Cemetery covers the site [2].

The name 'Paul Pry', of which there were several in the area including the one in Salford, comes from an 1825 play of the same name, and Mr Liston (of Liston's Bar and music hall fame), was depicted on several pub signs as Paul Pry - in this case, on a swinging sign in the pub's front garden.  This fact, and many many more, are from Roger Hall's excellent and readily available book, The Pubs of Blackley, published by the late Neil Richardson [2]. 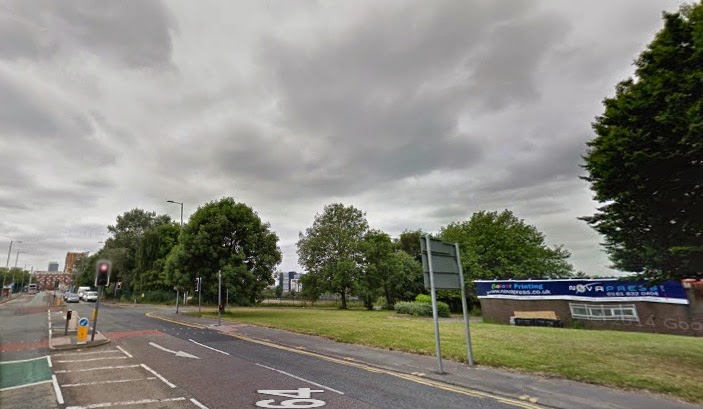 Not to be confused with the Queens Arms (aka Gas Works Tavern), this Queens Arms stood at No. 213 Rochdale Road on the corner of Barlow Street (later Aston Street).  It was licensed after the Beer Act of 1830 and the beerhouse was lost when it was combined with the Kings Arms next door in the late nineteenth century [1].  This once bustling stretch of Rochdale Road has been stripped of most buildings and is an embarrassment to Manchester, like so many of the main roads leading into the city centre. 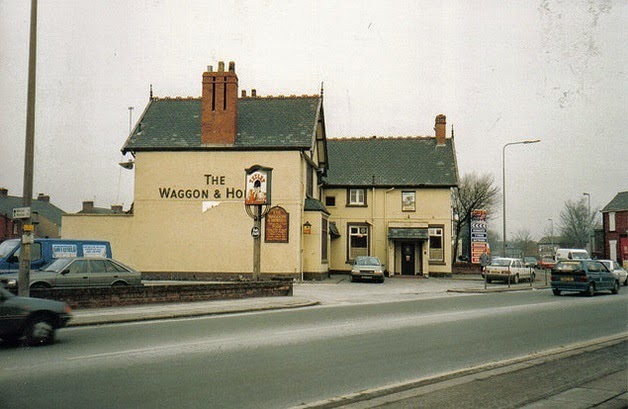 The original Waggon & Horses was first known as the Dog & Partridge and dates back to 1773.  After it was rebuilt in about 1856, as the building pictured above in 1991, it became a HQ for many local societies including the Patricroft Lancers FC, Barton Wheelers, the Peel Green Dahlia Society and the Peel Green Homing Society.  The new Waggon & Horses was a Hardy's Crown Brewery house until 1962, passing to Walkers of Warrington in 1961, and was a Tetley's pub [2] until it closed and was demolished in the early 2000s.  Since then a Netto supermarket has been built on the site of the old pub. 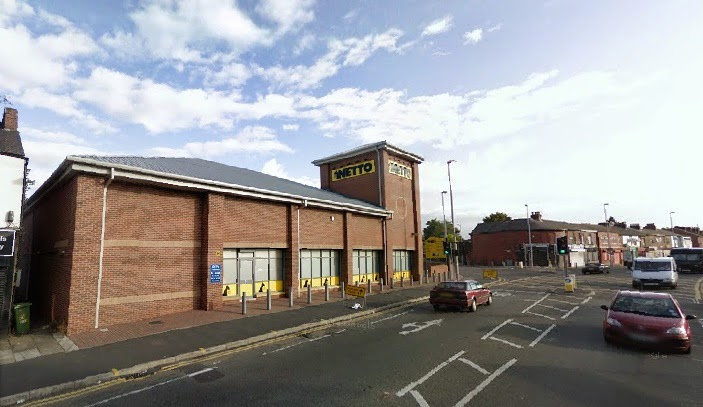 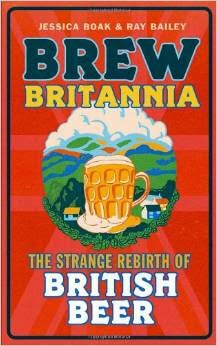 Jessica Boak and Ray Bailey's (aka Boak & Bailey) first book, Brew Britannia, is a highly readable account of the Strange Rebirth of British Beer.  It connects various groups who have all contributed - from eccentrics like the SPBW, the Firkin chain and CAMRA, to the floundering big breweries, and the modern-day 'craft brewers' who have rejuvenated many pubs, bars and off-licenses.  You can read reviews of it elsewhere (e.g. here, here and here), but it comes highly recommended for anyone with even a passing interest in beer, pubs and social history. 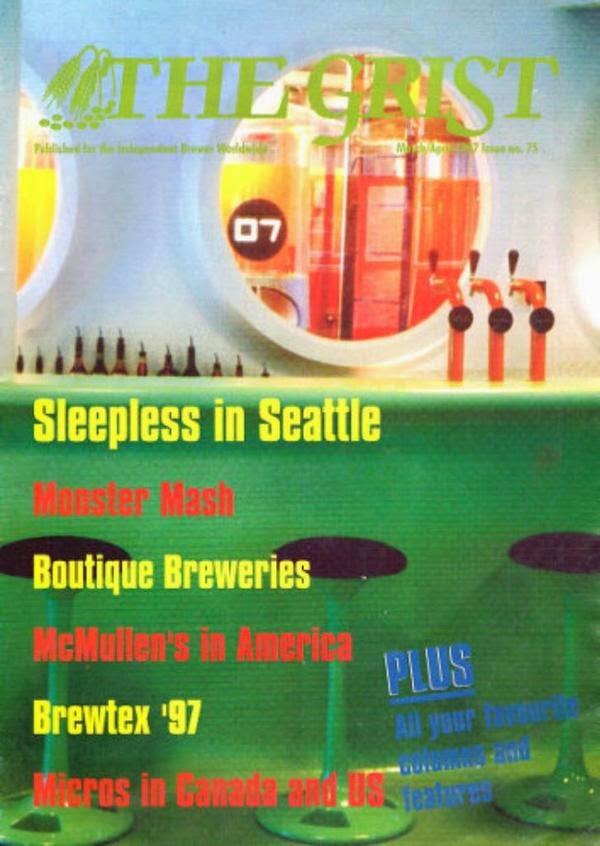 Manchester, of course, plays its role in the story, and one strange, short-lived bar (1996-2000) is featured.  In the mid-'90s, Oliver Peyton, London restauranteur, decided to expand north and in December '96 opened Mash & Air (Mash, the bar; Air, the restaurant upstairs) in an old warehouse on the corner of Canal Street and Chorlton Street.  The interior scheme was a futuristic white with a garish lime and orange theme... and revealing portholes [1,3]. 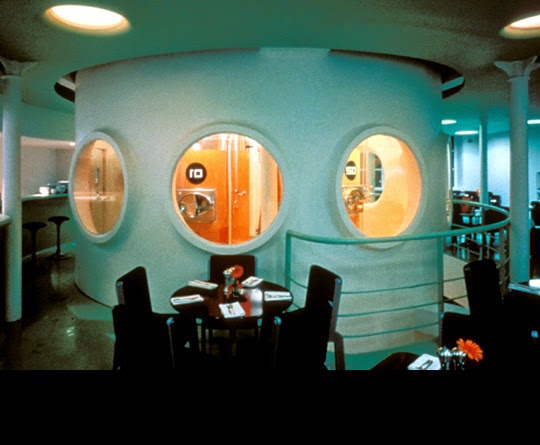 Peyton admitted the design was a reaction to the traditional nature of CAMRA and Firkin pubs, but like the latter, beer was brewed on site.  Mash & Air's space-age brewery was visible throughout the bar and restaurant, and could spit out 18,000 pints a week - none of it real ale though, with a bias towards lager.  Although Mash & Air closed in 2000 and ended up a comedy club, it lives on through the keg and bottle-only Meantime Brewery, as it was Alastair Hook who ran the bar's brewery [1]. 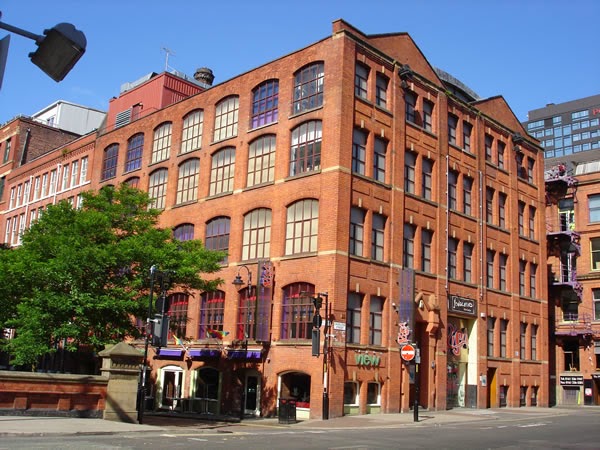 Pleasingly, there is still a review from Caroline Stacey in the Independent from January 1997 online [4], so before it gets lost in the ether, here is an extract:

Just before Christmas, Oliver Peyton, owner of two such London gaffs - the Atlantic Bar and Grill and Coast - opened Mash & Air in Manchester. Launches like this don't happen every month, or even year, here, yet a week after the opening junket, the number of customers was surprisingly sparse. Maybe Mancunians are harder to impress.

After all, there is civic pride and the tradition of dissent to uphold. And though eating lags well behind drinking, designer bars are two an Ecu in a city that's been transformed by EC funding. But, barely off the starting block, Mash & Air quickly impressed me. The design, by Australian Marc Newson, is in a similar Sixties-futurist mode to Coast. And it's beautiful. The large-windowed Victorian mill, in the middle of the gay quarter, is entered up steps and through glass doors with handles like jumbo orange taps. You arrive in a bar painted pistachio-meets-lime-green (even the floor), and furnished with Duplo for giants.

The name Mash & Air comes from stages in the brewing process, and a central well that appears to run from the top to the bottom of the building, visible through huge portholes, houses brewing equipment painted orange. When it's working, this brilliantly contemporary looking engine room - a canny tribute to a place that understands the attraction of manufacturing like no other - will pump out its own beer [4]. 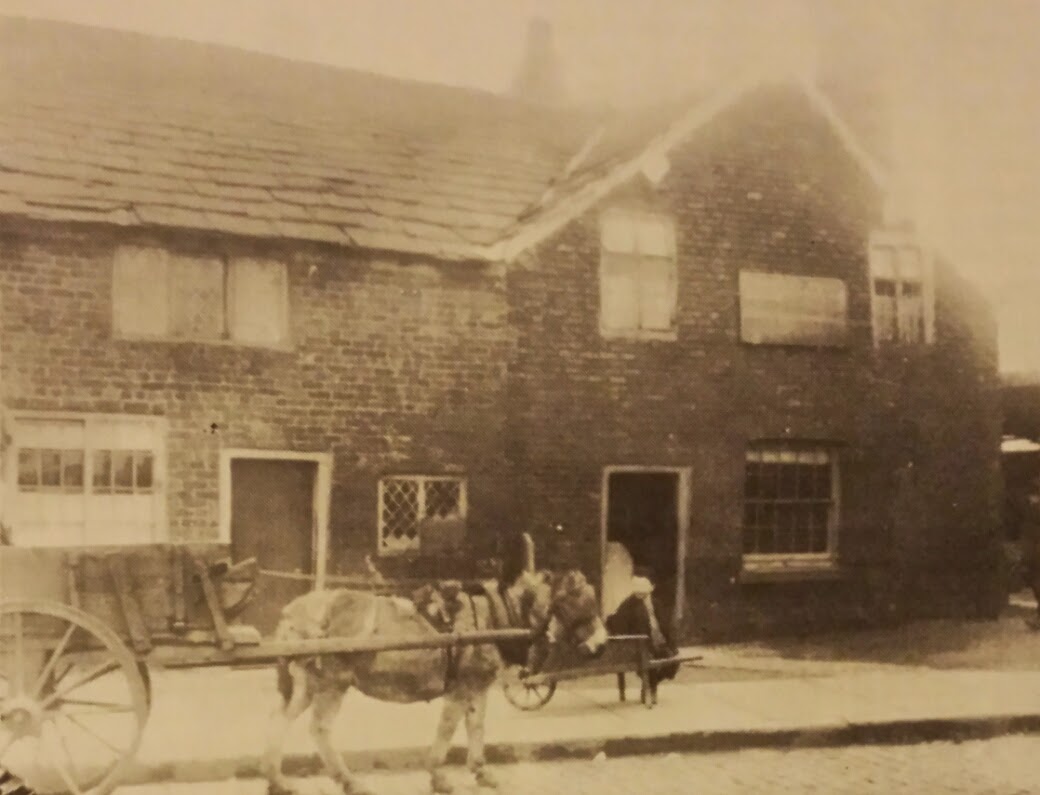 The Foresters Arms in Failsworth has been closed a few years now but this wasn't the original pub.  The first Foresters Arms was in a row of cottages set at an angle off Oldham Road, first licensed in 1830 after the Beer Act.  The above photo of the original Foresters is from about 1884 and was presented in an album to the locally famous Ben Brierley before his trip to America.  The first brewery to own the beerhouse was Watson, Woodhead & Wagstaffe of Salford, and the Foresters then passed to Walker & Homfrays in 1912 who decided to knock it down and rebuilt the pub nearby right on the main road [1]. 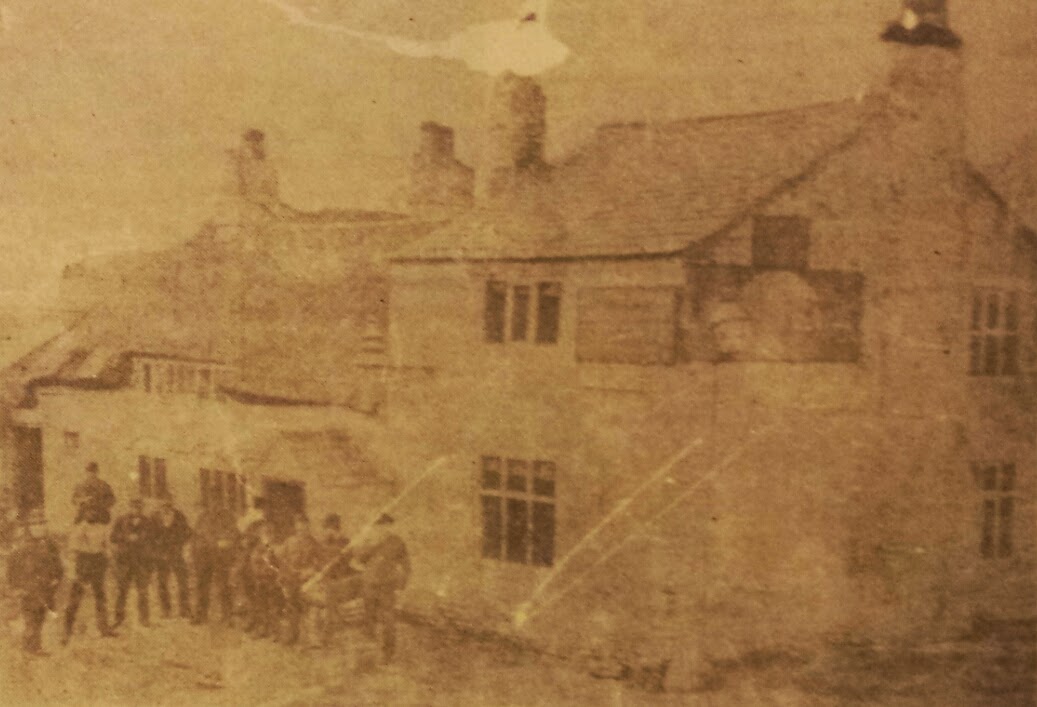 
The original Waggon & Horses was first known as the Dog & Partridge and can be traced back to 1773 as one of the oldest pubs in the Peel Green area of Eccles.  The pub went through a host of names changes, being The Dog, the Black Dog, the Greyhound, and the Black Greyhound, before settling for the Waggon & Horses in 1824.  The pub shown above in an ancient photograph was rebuilt in 1856 as the Waggon & Horses [1], which stood until the early 2000s but is now the site of a Netto supermarket.