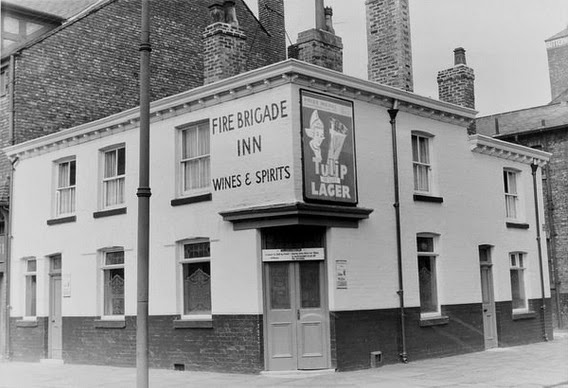 Like its neighbour, the Auld Lang Syne, the Fire Brigade on the corner of Polland Street and Munday Street has been lost while the brick and timbered building - the old Hetherington's Dining Rooms - that separated the pubs remained standing defiantly until recently. The Fire Brigade, previously a pork butcher's, opened in 1865 and was a Longsight Brewery house before becoming a JW Lees pub [2]. 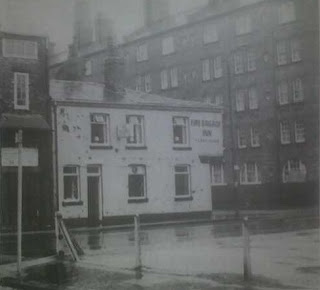 The Fire Brigade was later overshadowed by the Pollard Street dwellings which look quite similar to the Victoria Square sheltered housing development over in old Ancoats. Mick Burke recalled the Fire Brigade: "...the customers were the mob out of Walton House [dwellings]. The cider barrels behind the bar were leaking and stinking the place out. The feller who was looking after the bar had a torn shirt and looked as if he'd just come off a 2-10 shift at Bradford Pit - he hadn't had a wash in weeks! [2]". 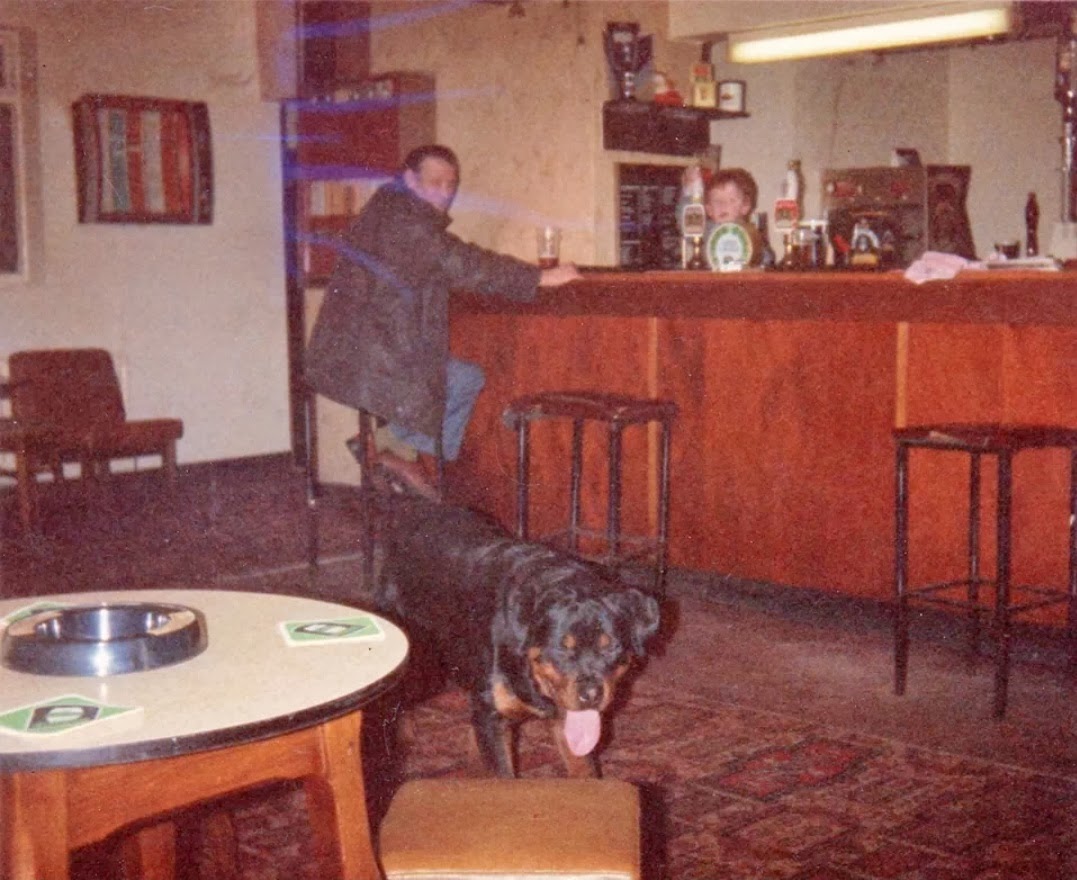 As mentioned above, the Fire Brigade is well-remembered as being a cider house. The evocative photo above from 1986 shows the Fire Brigade in its final days - the plain furniture, garish carpet, keg fonts and ashtrays hark back to a bygone era, though pub dogs are thankfully still popular. The pub was renamed the Pollard in the 1980s and was still open under Lees pub in 1987. But, like the Pollard Street dwellings before it, the boozer was pulled down and its footprint remains empty, though can still see the markings on the wall where the pub once was. 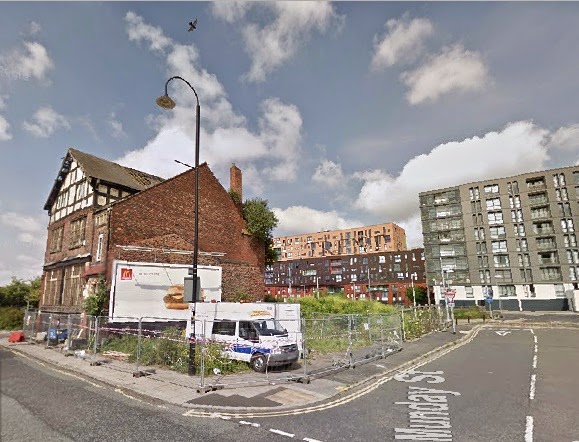 
But, like the Pollard Street dwellings before it, the Fire Brigade was pulled down and its footprint remains empty, though can still see the markings on the wall where the pub once was. The Hetherington's Dining Rooms was sadly demolished in October 2014 [3], taking it the last trace of the old Fire Brigade. 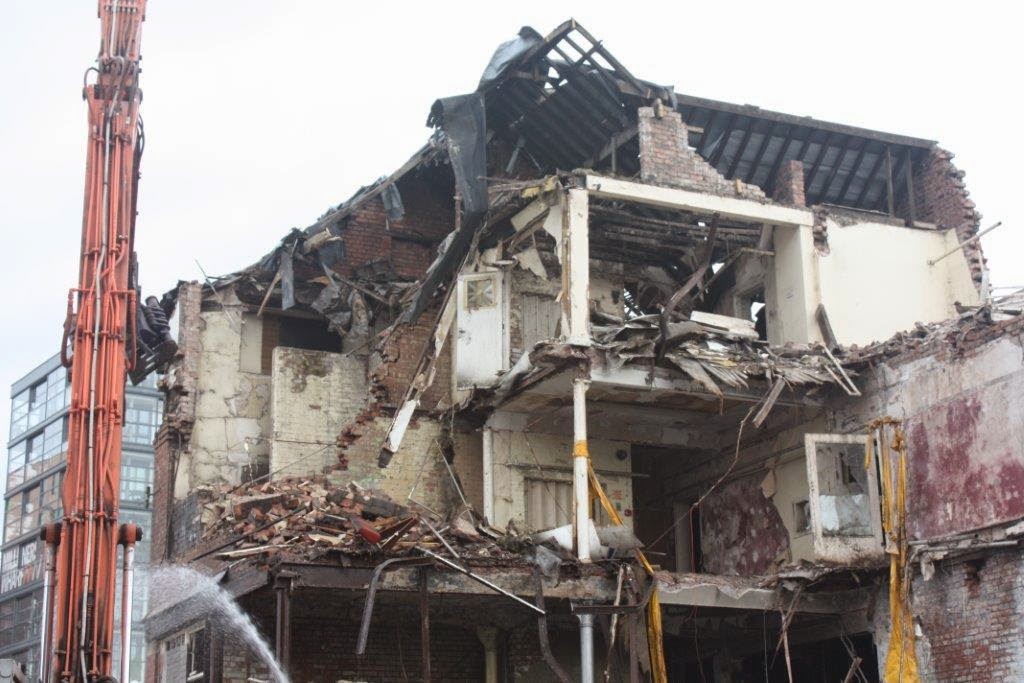 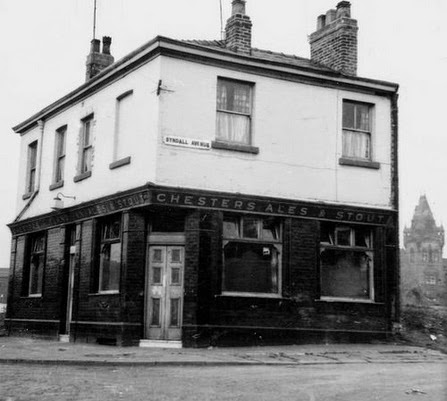 The Richmond Inn, shown at the archives in 1965 and 1970 as a Chesters house, stood at number 16-18 Richmond Street [2] in Ardwick. It was on the corner of the just-surviving (as Syndall Avenue) Syndall Street off Stockport Road. As shown in this fine 1969 photo, the sad sight of a pub left standing while the communities around it are demolished is an all-too-familiar one to pub historians.

The impressive Nicholls Ardwick High School is in the distance in the above photo, which is from September 1971 [1]. The Richmond Inn and Richmond Street are both long-gone and this corner of Ardwick has seen the infamous and brutal Fort Ardwick come and go in recent decades. 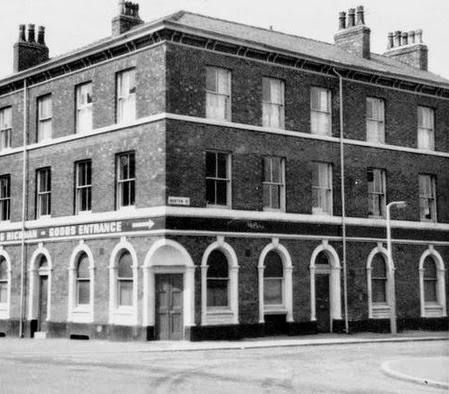 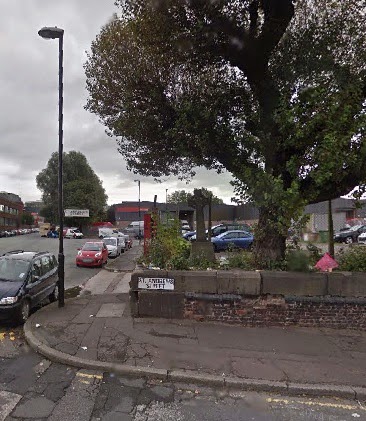 The St Andrews Tavern closed as a Hardy's pub in 1956, and Mick Burke remembers: "It was a busy pub. In the thirties the landlord was Bill Bunnage and he used to fence stuff knocked off by railwaymen from the yard across the road. He might say, 'D'you fancy a suit? There's one upstairs - go and try it on!' [3]." A few decades after it closed, the building was demolished and the site now boasts the Aeroworks development. 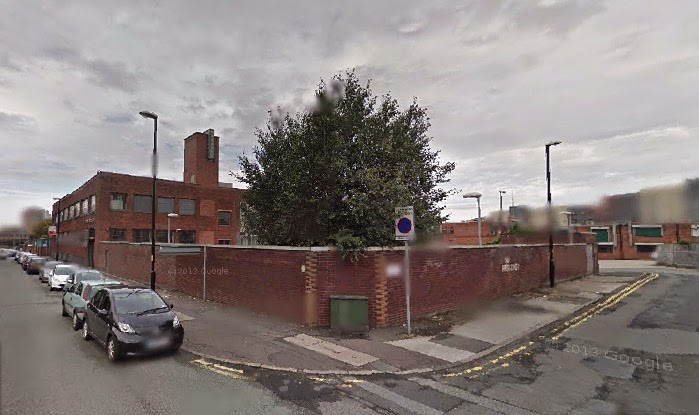 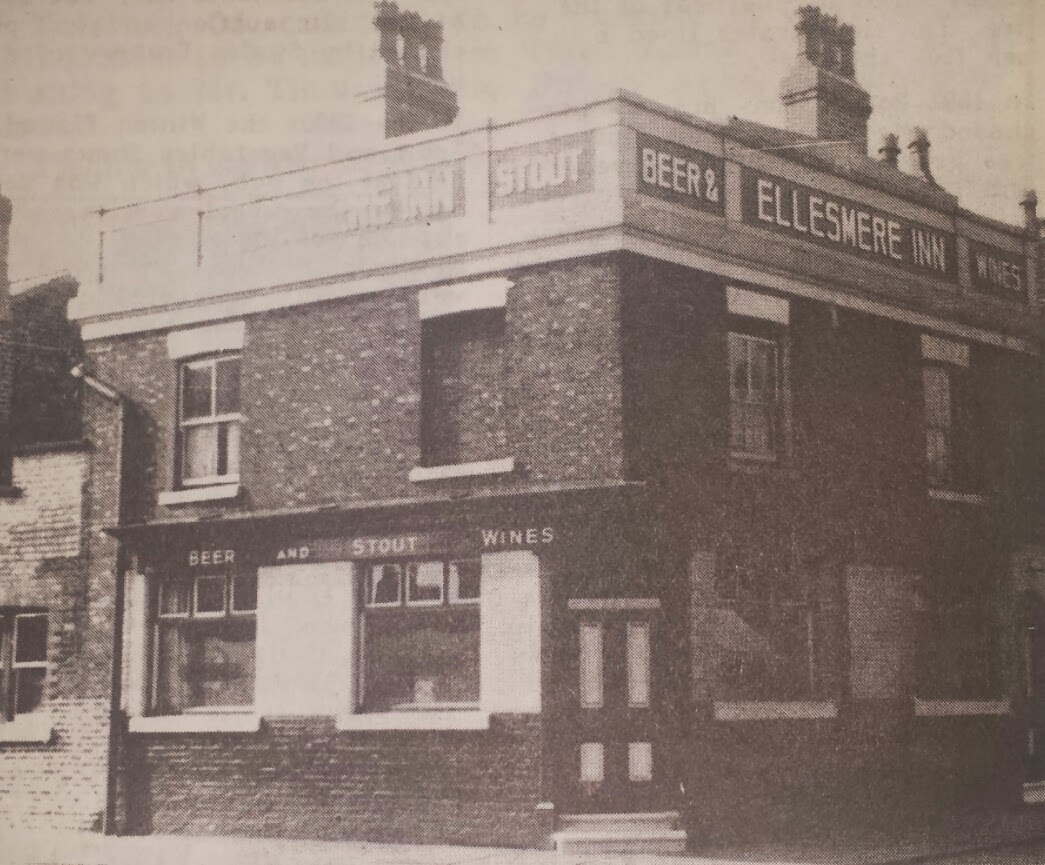 
The first Ellesmere Inn on Liverpool Road stood on the corner of Ellesmere Street in Patricroft and was originally called the Rob Roy.  It opened at some point before 1872 and served for about a century before being demolished in 1965.  Its replacement estate-style pub opened in May 1966, set back off the main Liverpool Road [1], still close to the Black Boy. The top end of Ellesmere Street was lost during this redevelopment , but the new  Ellesmere Inn has since closed too. 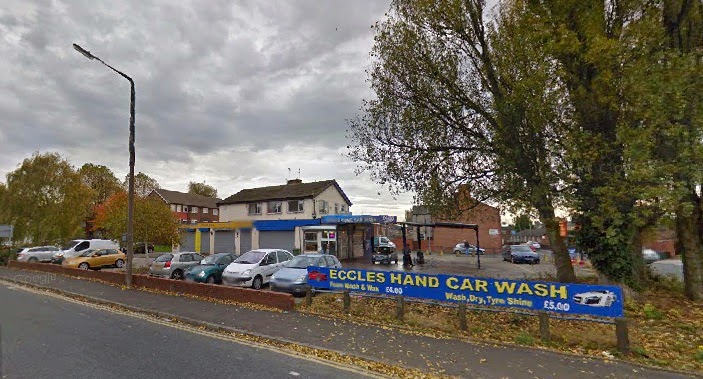 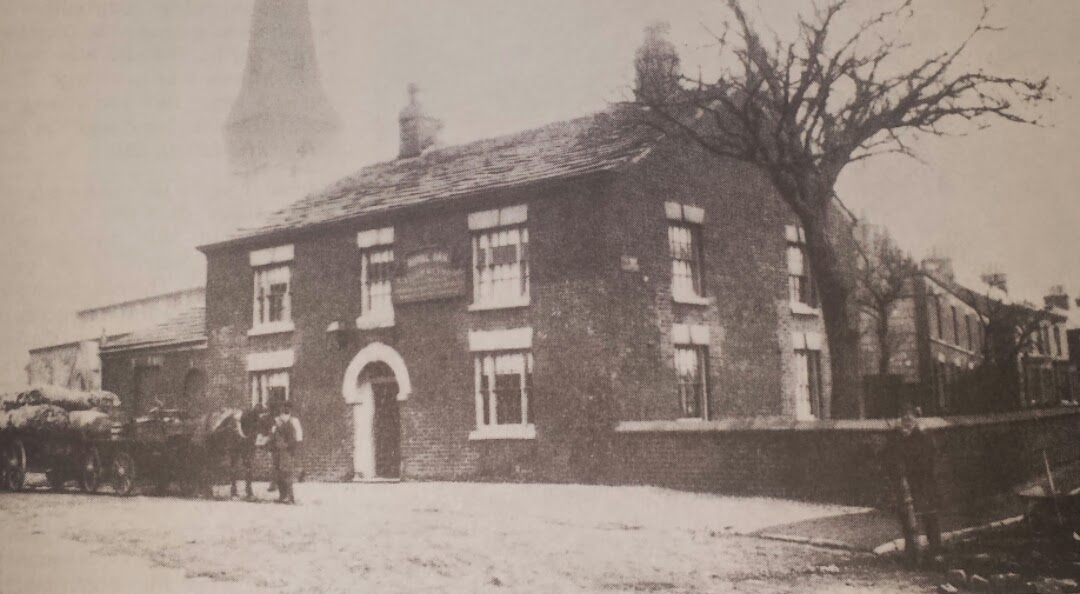 Not to be confused with the old Royal Oak further along Oldham Road in Newton Heath, this was the original Royal Oak of Failsworth. Shown above in 1890, the first Royal Oak dates back to about 1812 and stood on the corner of Oldham Road and Pole Lane. The pub had a brewhouse, two hotel rooms and stabling. In 1929 Cornbrook Brewery bought the Royal Oak and rebuilt it on the same site as the gabled pub which still serves today. 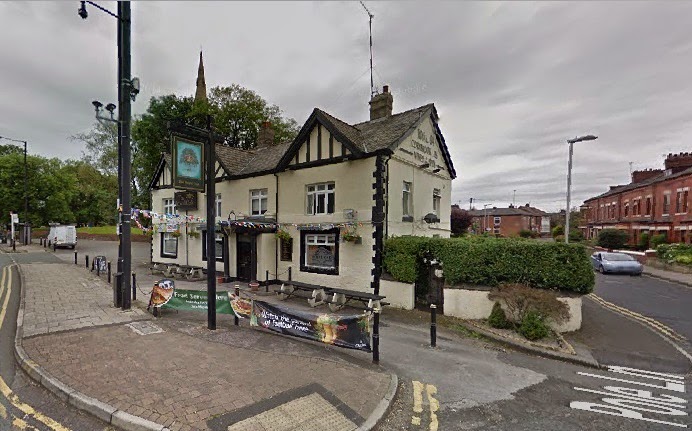 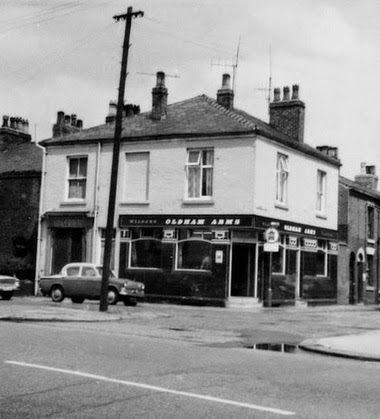 The Oldham Arms stood on Belle Vue Street, on the corner of Sussex Street, with Queen Street just starting to the right, in West Gorton. It stood at No.39 Belle Vue Street and dated back to at least 1876 [2]. Pictured above in August 1971, and also here in 1971 [3], the Oldham Arms was next door to "Valerie's" - what this little establishment was is anyone's guess. 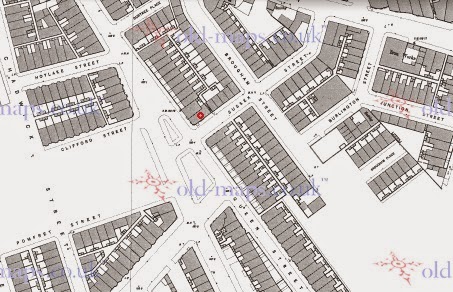 The pub was originally a Cornbrook Ales house [5] and ended up with Wilsons Brewery as seen here. Belle Vue Street still runs today from Gorton Lane to Hyde Road. The street layout around here is much-changed with this spot being roughly the old location of the Oldham Arms. 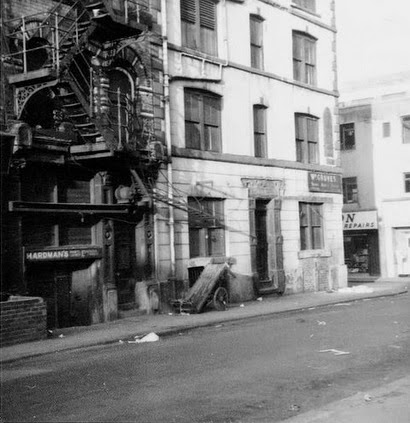 
The pub that once stood on the corner of Tib Street and Green Street has been known as the Dumfries & Galloway Arms, Sherwood Inn, Albion Mills Tavern, Anglers Tavern and lastly the Elephant. Pictured here in July 1970, the Elephant was a distant memory already. 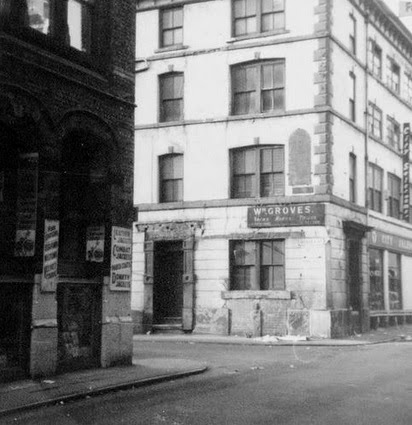 
Green Street used to link Tib Street and Oak Street, but since the building of the odd little city centre council housing estate here, it has been renamed Dorsey Street (later becoming the pedestrianised Brightwell Walk). 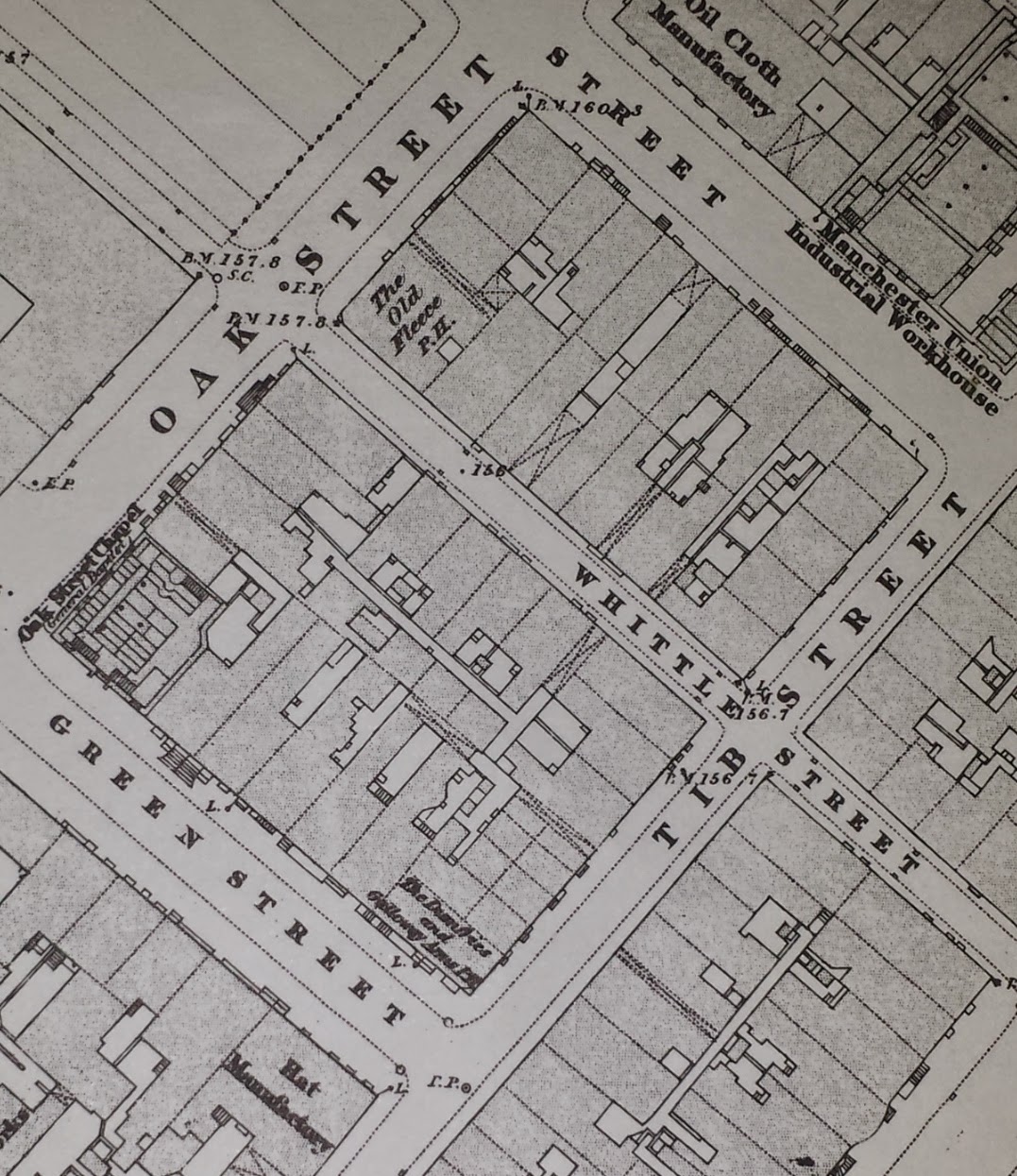 Dorsey Street is best known for Cord Bar on the other side of the road and the Tib Street Tavern (former Centro) faces the old location of the beerhouse. The old four-storey building has been demolished replaced with a new-build and today houses a handbag shop. 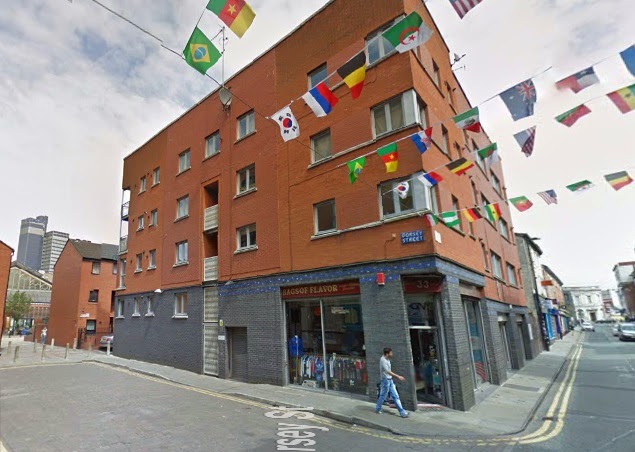 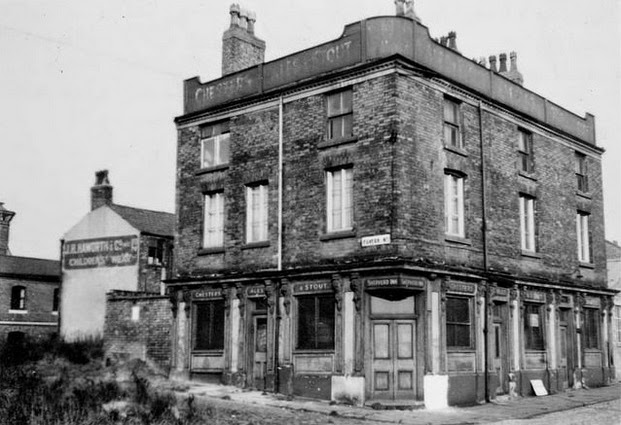 
The area just north-east of Piccadilly Station bounded by Store Street, the Mancunian Way and Great Ancoats Street was heavily populated before slum clearance in the 1930s. The area with Chapel Street (now Chapeltown Street) running through it was nicknamed "The Dardanelles". This part, close to the station, was described as: "a commune, and some of the chief pubs were the Shepherd on Chapel Street, 'Harry Horner's' (the King Billy on Boad Street) and 'Betsy Royle's. The Railway on Chapel Street near Hetherington's works was always called Abigail's [2]."

The Shepherd "was a Chesters house and all the rough characters used to go in the side vault called the Carrot Yard which was supposed to be a women's room." The Carrot Yard was probably named because the railway horses were stabled around the corner and carrots would be delivered to them here. As Mick Burke remembers: "Chesters beers had a big following in those days.  It used to be mentioned that you got a pension from the brewery if you could remember the number of pints you'd drunk at the age of sixty.  There was a special ward for Chesters cases in Crumpsall Hospital!  It was terrible stuff, black as Spanish (liquorice) [4]." 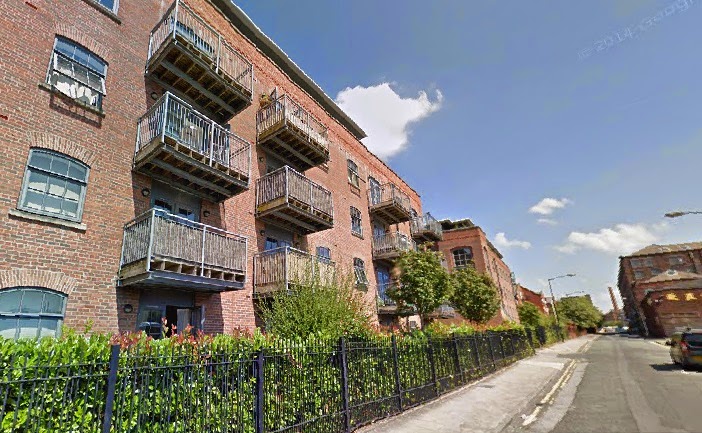 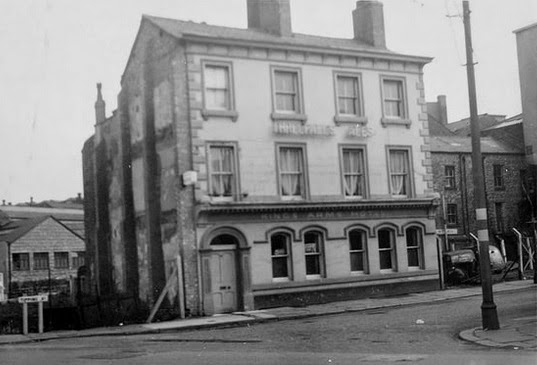 Pictured above in March 1964 by David Lewis, the Kings Arms Hotel stood on Tipping Street on the edge of Ardwick and the city centre, a location that has been swallowed up by the Mancunian Way ring road.  The Kings Arms was a Threlfalls house, as seen in this 1959 archive photo.  The pub was on the Downing Street corner of Tipping Street, so it was opposite the Royal Oak. 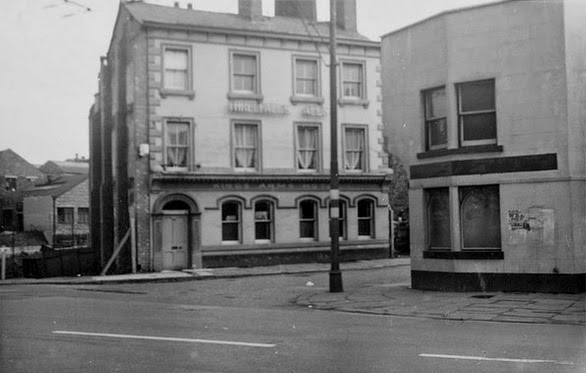 The Royal Oak can be seen on the other side of Tipping Street, on the right, in the above picture of the Kings Arms.  The former site of the Kings Arms Hotel is today the shadow of the huge MacDonald Hotel (the old Victory House and Telecom House), opposite the skate park beneath the Mancunian Way flyover. 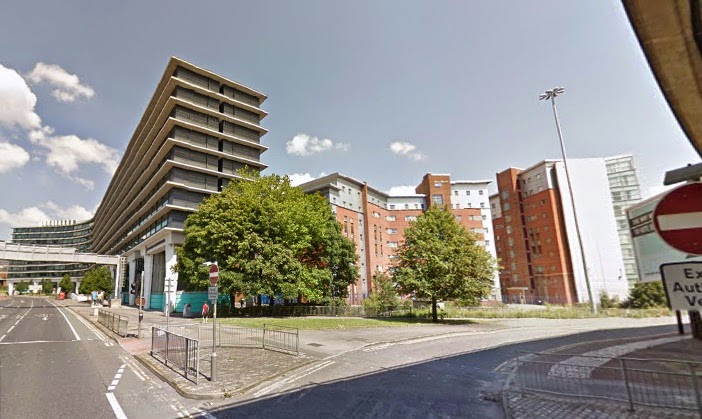