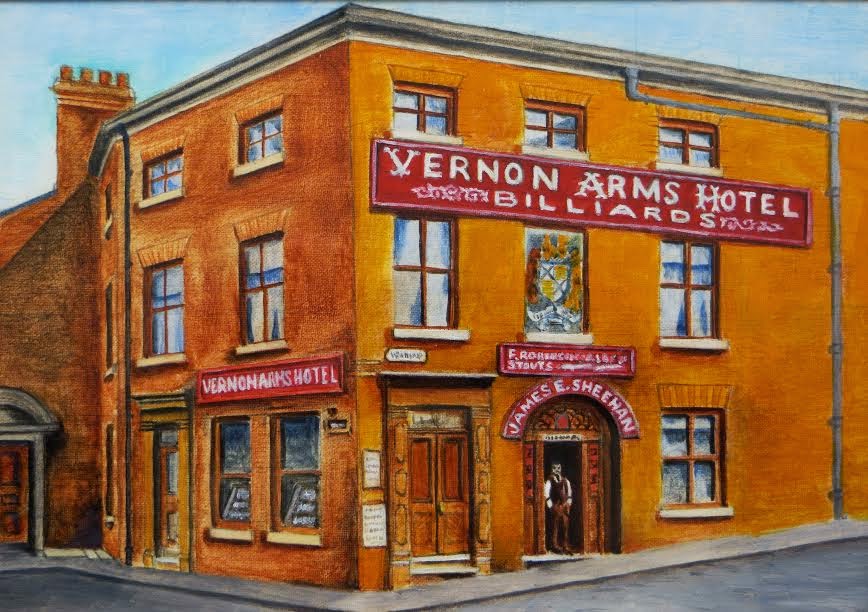 The Vernon Arms stood on the corner of Vernon Street and Warren Street in Portwood, Stockport. It has long been lost to the new ASDA development at the start of the Merseyway shopping precinct, but this lost Robinson's pub is fondly remembered. Jim Phelan, grandson of a former landlord of the Vernon Arms, James Sheehan, takes up the story.

James Edward Sheehan, born 1878, was landlord of the Vernon Arms before, during and after World War I. He was previously a pawnbroker and insurance agent before taking on the tenancy around 1912. In 1915 he enlisted in the Irish Guards for war service despite being 37 years old at the time. James fought at Passchendaele and was wounded in his knee and left hand. The photo of James standing in the doorway of the Vernon Arms was taken in 1913. The vehicle in the picture is a 1910 Napier 15HP Landaulette Taxi, registered in Sheffield. 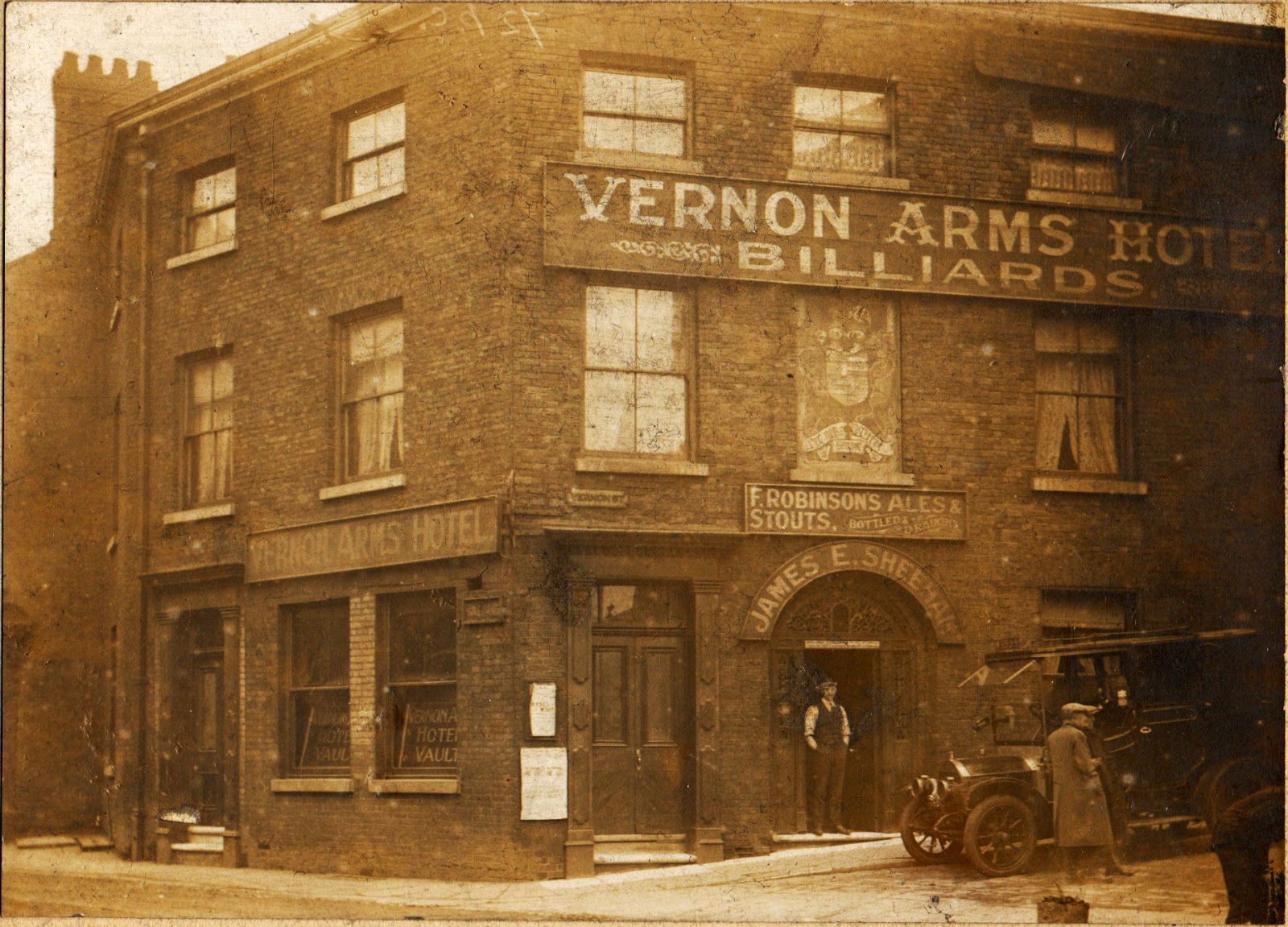 When his wife, Lavinia, died during the Spanish flu epidemic of 1918, James returned to look after his two young children. In the early 1920s, there was a post-war depression and supplies being hard to obtain, the business gradually declined. Rather than accept bankruptcy, James walked away from the Vernon Arms leaving all his possessions behind, and with his children, went to live with his elderly mother in nearby Edgeley. 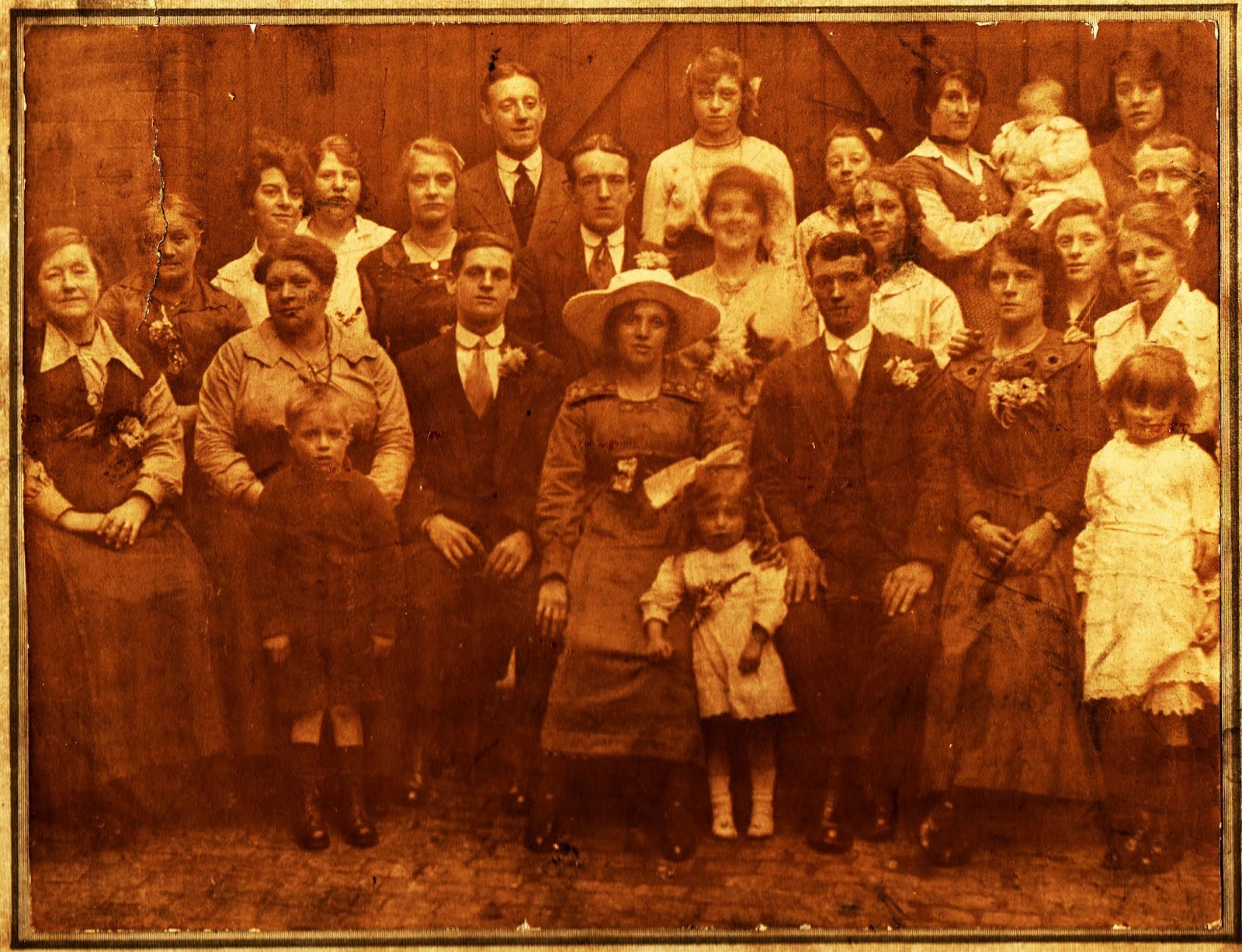 The wedding photograph was taken in the yard of the Vernon Arms circa 1918. James is standing in the back row, his daughter (Jim's mother), Kathleen (born 1912), is the little girl front right, and her brother Jim (1914) is the little boy on the left. Behind Jim is a Mrs Slattery who was the cleaner, childminder, barmaid and general dogsbody at the pub. 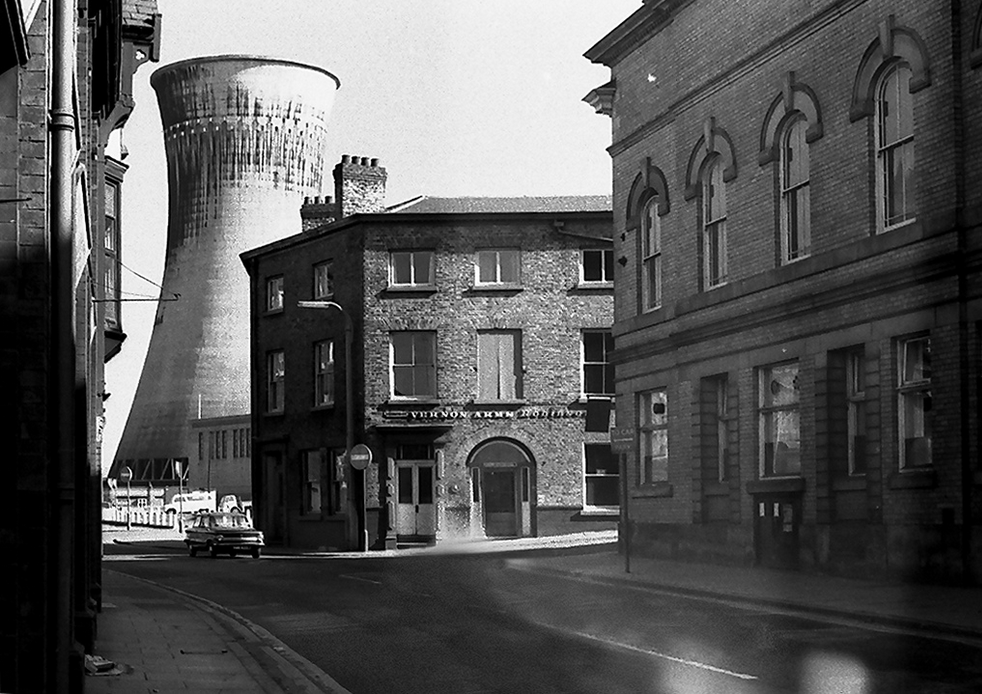 The black and white photograph shows the Vernon Arms in relation to the electricity cooling towers with the courthouse on the right and probably dates from the 1960s. Confusingly, this area is known as Portwood, Brinksway and Underbank, the street on the right, Vernon Street, leads up to the market. The pub was demolished in the 1980s to make way for the ASDA supermarket. 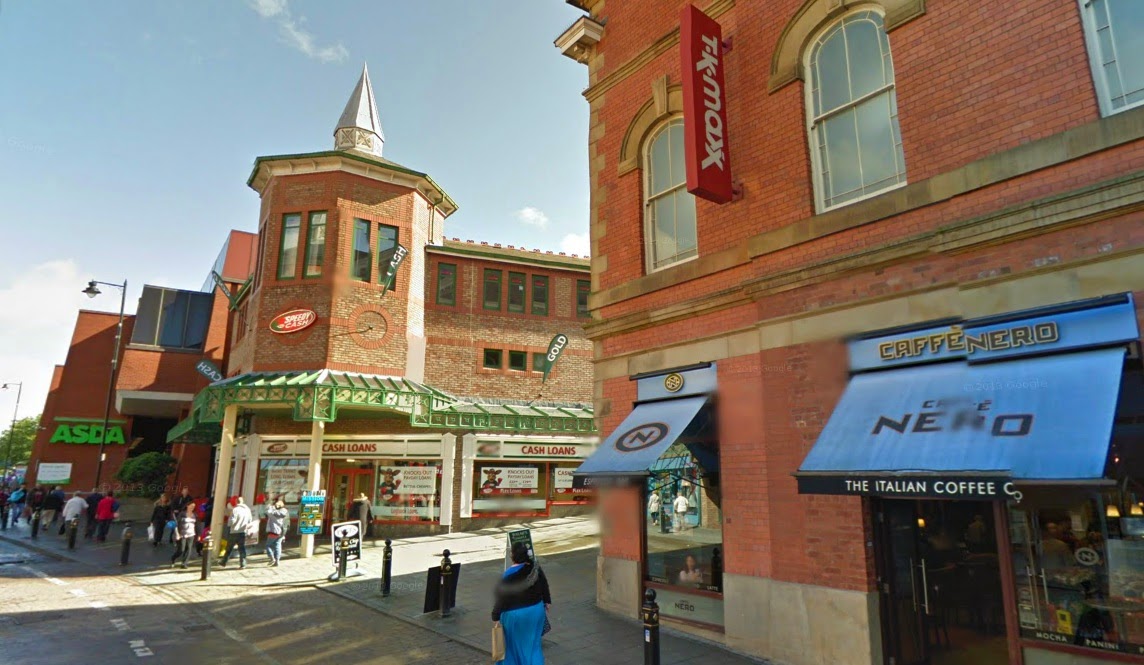 An odd looking new-build has replaced the corner on which the Vernon Arms stood, which is today occupied by a loans company. However, the old courthouse building opposite on Vernon Street remains and houses a coffee shop. Wonder what James Sheehan would have made of today's Stockport town centre? 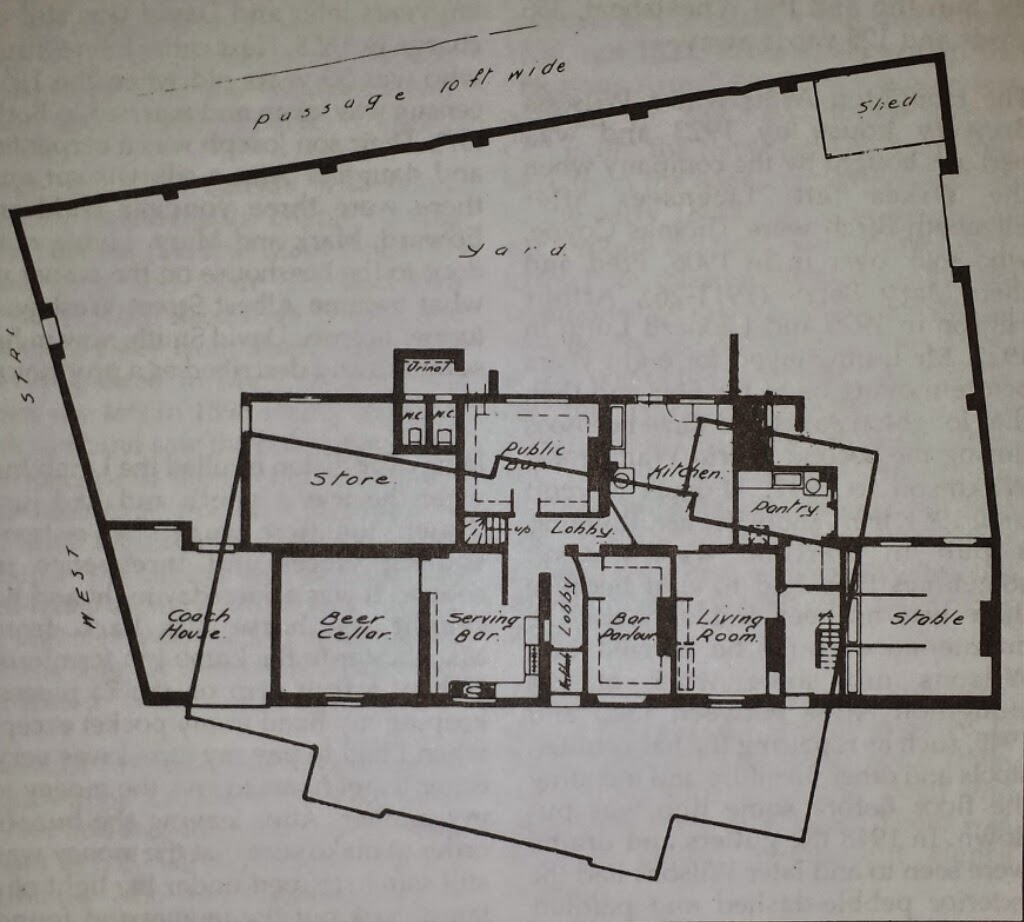 
Back Lane was an old name for Ashton Road West which runs off Oldham Road in Failsworth. On the first bend of the road close to where the current Mare & Foal stands today, used to be a farmhouse, part of which was the original Mare & Fold beerhouse. The farmhouse, which stood where a lane, Bardsley Fold (now Clive Road) ran off Back Lane, was owned by Ralph Ogden who opened what was originally the Grey Mare in 1833 [1]. 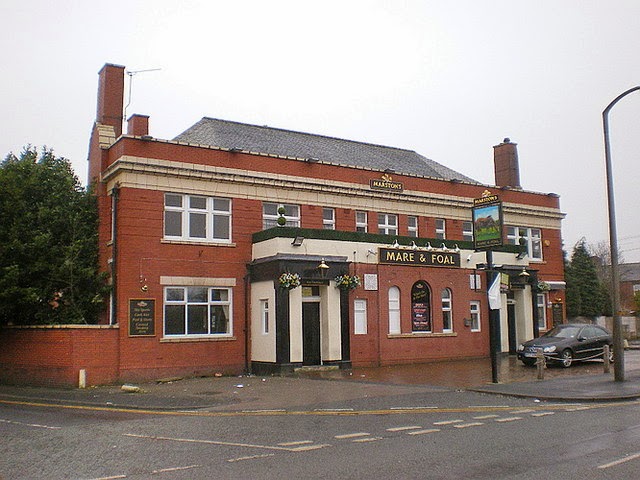 By 1887 both beerhouse and lane had changed name, to the Mare & Foal, Ashton Road West. Rothwells Brewery took over the beerhouse in the 1920s when it had a lobby, pubic bar, serving bar and bar parlour, so was a fairly big boozer. In 1935-36 Rothwells rebuilt the Mare & Foal and the new pub was fully licensed by 1949. Marstons took over in 1961 and still own the building, which sits almost exactly on the same spot as the original [1]. 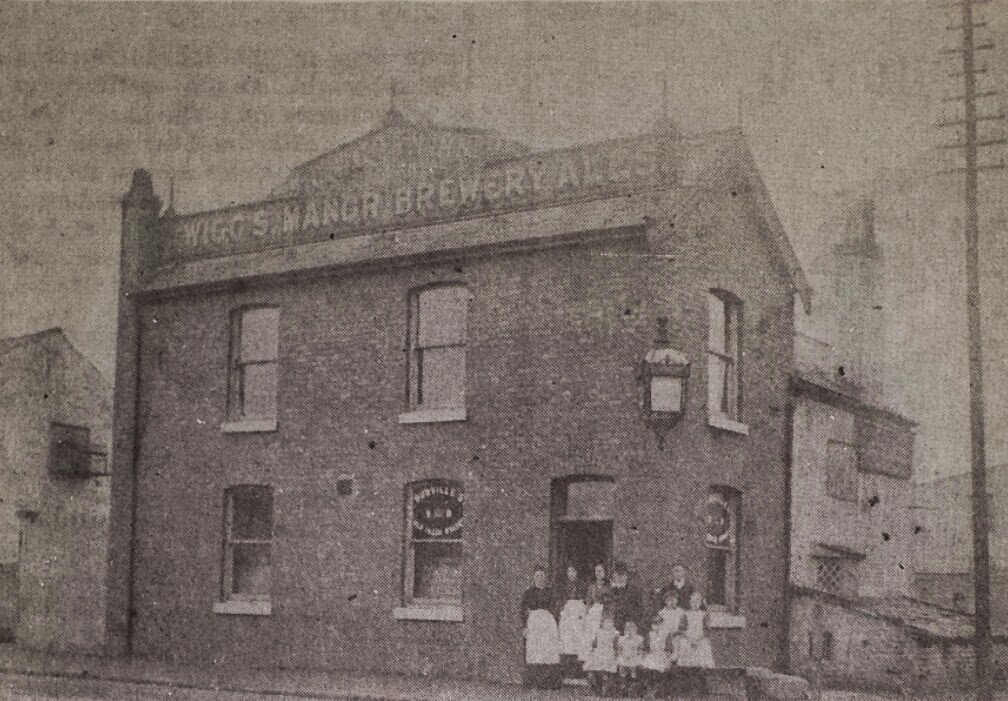 
The original Unicorn on Liverpool Road dated back to the early 1800s and in the early days was nicknamed "Pretty Margarets" after landlady, Margaret Greaves. An intriguing find was made behind the pub in 1875 when a 3-foot wide pathway lined with boulders was found 5 feet below the surface along with a set of stag's antlers [1].

In 1878 Robert Harrison bought the Unicorn for £4,105 and the street behind where the pub stood is still named Harrison Street today. In the same year the Unicorn became a John Twigg Manor Brewery house, who themselves merged with the Rochdale & Oldham Brewery Company in 1895 who then rebuilt the Unicorn as the pub which stands today [1]. 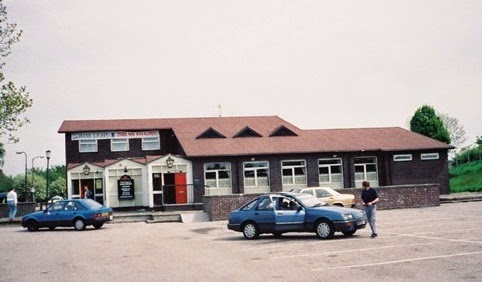 
The Pike Fold (or Pikefold as it was called later) was a late 1960s estate-style boozer [2] at the bottom off Plant Hill Lane, just off Chapel Lane near Plant Hill Police Station, in Blackley.

Shown in 1968 as a Charrington house, by 1985 under Bass its named had been truncated slightly, even though the area is "Pike Fold". The Pikefold closed some time in the last decade or so and today is in use as a nursery. 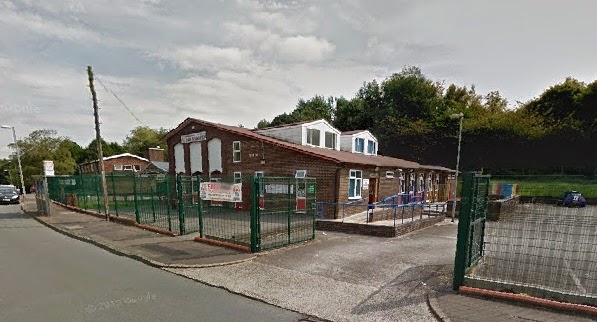 The Pikefold has clearly had some significant external alterations, with the old entrance extended over and two roof extensions added to the nursery. At least this old estate pub is still of some use the community.