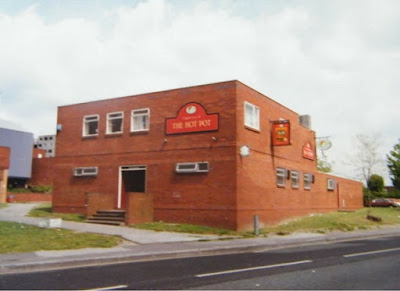 
The Hot Pot was a functionally grim Greenalls estate pub built in front of Moss Side Precinct and the blocks of flats on Moss Lane. Its back gates faced Moss Side leisure centre. After the precinct and flats were demolished the temporary Moss Side market was held in the old Hot Pot, as seen here in December 1993 [1]. The market was eventually relaunched at its current location in 2001 on the new Hulme High Street [2].

Apparently the Hot Pot occasionally featured live local bands, and one night one act overstepped the mark by throwing toilet roll around. The large, gay barman angrily chucked the lead singer off the stage ("were you born a cunt?") and also demanded the crowd finish up their Hydes Anvil ale and leave [2]. These days the huge ASDA and the indoor market straddle site of the old precinct and the Hot Pot. 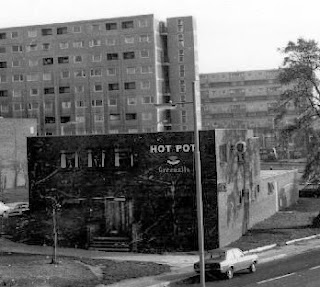 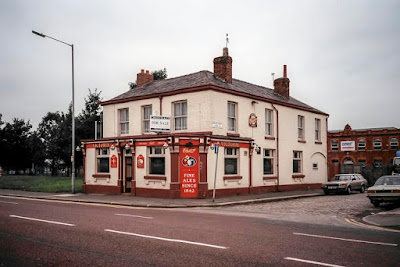 The Victoria was an old Chesters and Whitbread house on the corner of Hyde Road and Fenton Street, directly opposite Belle Vue Speedway stadium. This stadium, Hyde Road, was home to Manchester City FC until 1923, and was also, of course, part of the grand old Belle Vue Gardens. 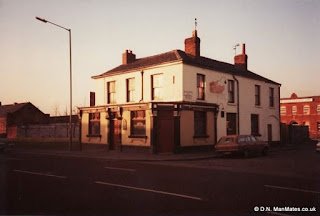 The Victoria is pictured in 1971 at the Manchester Local Image Archives, adjoined on both sides by houses which lost years in the intervening years. They probably fell victim to the ill-fated Hyde Road widening plans, which of course never materialised. 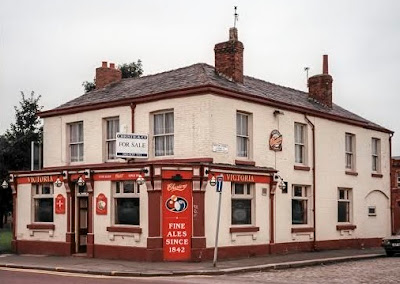 The Victoria is shown here twice thanks to Simon Hall, and his pre-match pub crawl before the Manchester City vs Crystal Palace match in August 1991. The pub was still selling Chesters ale then, but was up for sale and I don't think it lasted much longer.


This corner still stands empty although a some new build units and a cash & carry (where we used to park up for the speedway) were built set back from the main road. 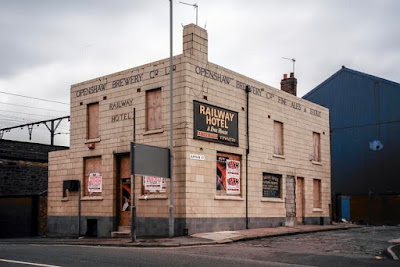 The Railway Hotel is pictured above on the corner of Pottery Lane and Jarmain Street in Gorton on the 24th August 1991. Crystal Palace supporter, Simon Hall, and his mates were their way to Maine Road for an early season match, and naturally decided to visit some local(ish) pubs and sample a few ales. When they came across pubs that were architecturally interesting, looked like they were on their last legs, or were already closed, Simon would take a photo. 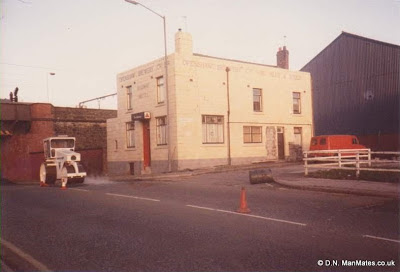 
The old Openshaw Brewery house certainly fell into the latter category of already being closed in 1991. Its classic white tile-cladding, and the grand lettering advertising their fine ales and stout, were somewhat spoiled by the boards up at the windows (Simon's day was also somewhat spoiled by the result; City went top of the league with a 3-2 win). In its last years the pub was a freehouse under Matthew Brown and Thwaites, both of Blackburn. The Railway is shown above, probably a few years previously, courtesy of ManMates, when it was still open.

The Railway is shown at the archive in 1971, after it had been taken over by Tetley's Brewery of Leeds. The Openshaw Brewery (known as the Victoria Brewery) was close by on the lost Aberavon Street. The Railway stood on the corner of Jarmain Street and Pottery Lane, the former which has also been lost, as the above 1977 extract details. The factory and the railway bridge which carries the line through Ashbury's station, have not changed much since the Railway was demolished without a trace. 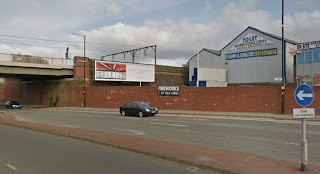