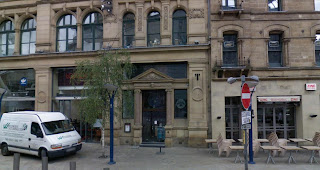 This was a nightclub operated by 'George the Greek', the well-known Manchester landlord who most recently has had the Circus Tavern and now the Abercromby.  The Moonraker was opened in the Corn Exchange to try to take custom away from the press's established drinking dens around Thompson House.  These were the days when the 'Printworks' - previously Kemsley House, and later Maxwell House - lived up to its name.  These lost drinking dens included the Green Door Club, New Castle & Falcon Club and the New Green Door Club. 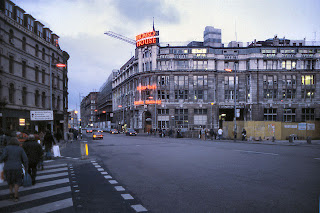 Greek George's plan didn't appear to have worked so well, the unions were clamped down on in the 1980s and the drinking culture of the newspaper workers started to disappear, along with many of the old haunts, and it looks like the club folded in the mid-'80s.  An amusing tale from the Moonraker  is a drinker once being offered a typewriter by a fella who came back with one a few minutes later... complete with plug, socket and wall.  These days a Pizza Express has taken the place of the Moonraker Club, in between Zinc Bar & Grill (formerly Walcots and Rowntrees) and Tampopo. 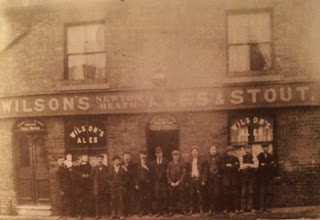 Pictured above in 1906 before what looks like a jolly boys outing of some sort, the Old House at Home opened in 1848 and was soon under the ownership of Cox's Chester Road Brewery of Hulme.  Sitting on Barlow Street, a small street off bottom Collyhurst Road on the River Irk, the Old House passed to Wilsons Brewery, presumably when the Newton Heath giant bought up Cox's, but the boozer only lasted until 1913 [1]. For unknown reasons, Barlow Street was renamed Bedwell Street before the area was cleared of most housing and industry. 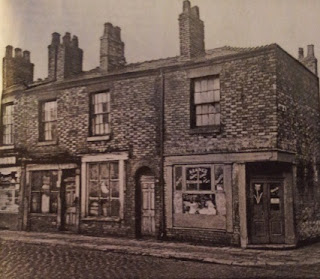 This short-lived beerhouse opened in the 1850s but by 1870, tenant Richard Litherland had his beerseller's certificate refused.  The Brewers Arms was forced to close and was converted to a pawnbrokers, pictured above on the corner of Ann Street and Silk Street in 1952 [1].  Ann Street used to run from Silk Street up to Flax Street but only the former remains, with the old Druids' Home estate pub seen in the distance on the right (the Brewers Arms would have been on the immediate left here). 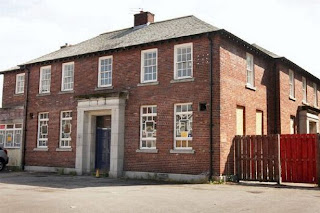 The Feathers is a recent pub closure in the otherwise popular Chorlton, which these days is probably second only to the city centre in terms of numbers and quality of pubs and bars in Greater Manchester.  Opening in 1959 [1], it lasted just about half a century, closing in 2009, followed a year later by a stealthy conversion to a Tesco metro (doubly-expensive version of their normal offering). 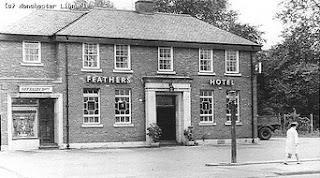 The Feathers had something of an edgy reputation in the last few decades, and along with the Royal Oak, was the only boozer around here that can be described as rough.  Locals campaigned against Tesco after the Feathers closed, though I suspect these were the sort of Chorltonians who shop in the suburb's ethical vegan craft shops and who'd rarely set foot in the pub.

A claim to fame for the Feathers was its occasional feature on TV in the 1990s, when it featured in a few of the popular Manchester-based dramas - Cold Feet, Cracker, Cutting It, etc.  Here's the Feathers being built in 1959 as a Threlfalls house, finally open in November of that year ('Outdoor Dept'?). 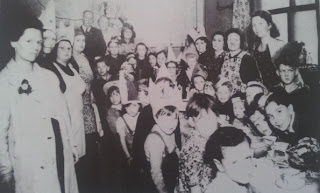 The Vauxhall Inn lasted almost a century, standing at 5 Sophia Street, Collyhurst from 1866 to 1963.  However, it lived on, when the landlord of the Vauxhall, Billy Green, moved to the new estate pub nearby on Talgarth Road.  The new Vauxhall Hotel was soon renamed after the man himself, and Billy Greens has only recently closed.  The original Vauxhall Inn is pictured in Bob Potts' book with the pub packed with local kids during V.E. celebrations, Billy Green is at the back [1].  Sophia Street used to run off Rochdale Road between where these grim flats sit, while Billy Greens is just behind the left block. 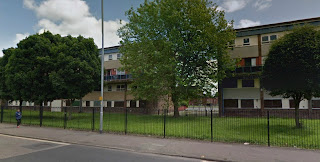 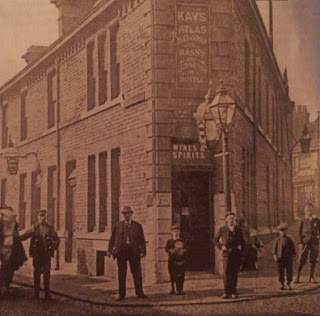 Wilburn Street used to run parallel to the top end of Ordsall Lane, running from Regent Road up to Hampson Street, and a short stretch still remains today.  When a short road was built to link Wilburn Street to Ordsall Lane, an old beerhouse called the Mechanics Arms was demolished and a wedge shaped public house was built in its place, the Railway Hotel.  Sadly, the Railway was destroyed in the Christmas Blitz of 1940 which also killed the landlord and his wife, John and Anne McGrevy.  The Railway started out under the ownership of the Sun Brewery of Ford Lane, passing to Kay's Atlas (pictured above, with posing chaps, in 1910), and then to Robinsons of Stockport by the time it was lost.  The licence eventually passed to a new estate pub a few miles away, the Pied Piper on Eastham Way in Little Hulton.  You can still make out the wedge shape, on Ordsall Lane leading to Wilburn Street, where the Railway Hotel once stood. 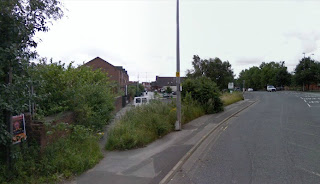 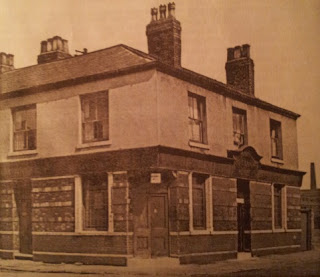 The Britannia was the first pub to open on Ordsall Lane in 1824, standing on the corner of Regent Street, just north of Regent Road.  By the 1870s the pub was owned by James Henry Deakin, the brewer, which turned into the Manchester Brewery Company in 1888.  When the Britannia was issued with a compulsory purchase order in 1955 it had passed to Wilsons, and it closed in 1959 due to the huge post-war redevelopment of this Manchester end of Regent Road [1]. 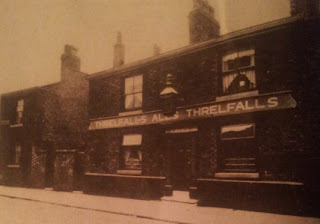 The Hope Tavern used to stand on Elizabeth Street, off Rodney Street and Butler Street, opposite where the recently demolished Admiral estate pub used to be.  From above, the 2008 shot on Google Maps shows a row of houses to the north and the Admiral to the south-east at the meeting of Butler Street and Rodney Street.  However, fast-forward to 2012 at street view and the flats and the pub have been razed to the ground.  The Hope can be traced back to 1843 and by the turn of the century was under the ownership of Bentley's Viaduct Brewery of Ardwick.  Threlfalls took these over and the Hope Tavern survived here until 1962 [1]. 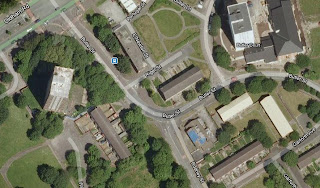 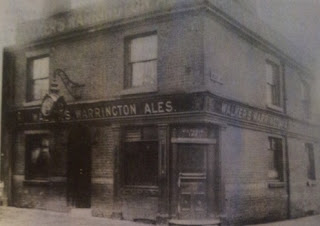 This boozer used to be known as the Luck's All before being renamed the Victoria Arms, pictured as a Walkers of Warrington house above in 1912.  The Victoria closed in 1928 on the corner of Gray Street [1], which was just off Carruthers Street and Mill Street (Carruthers St used to carry on past the terrace in the below shot; the Victoria was on the spot of these houses). 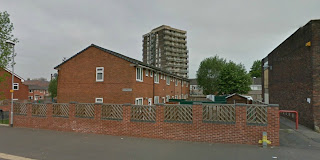 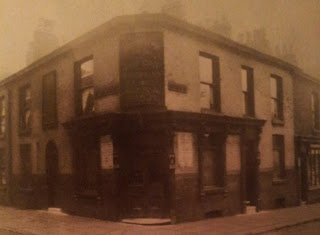 The Cricketers Inn or Arms stood on the eastern corner of Pollard Street and Beswick Street in Ancoats and was an Empress Brewery house when it closed in 1939.  However, the photo above, which shows the Cricketers over a century ago in 1912, appears to have 'Joseph (Hardman's?) (something) Ales & Stout' on its sign.  Can anyone shed light on this?  Mick Burke, chronicler of Ancoats boozers in Neil Richardson's fine book, remembers spending plenty of time in the Cricketers: "It was one of those places where you could stop as long as you like.  'Shut the doors, there's enough in now,' they would say. The police would come round at the top of Cannel Street and they'd have a drink, too [1]." 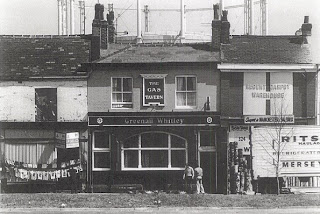 The Gas Tavern (named for obvious reasons, see the gasometer behind it, above) opened in 1861 in a row of houses on Regent Road on the corner of West Egerton Street and eventually became a Groves & Whitnall house, like many Salford beerhouses.  The brewery added distinctive brown tiling to the front of the boozer and in the 1960s the Gas Tavern was granted a full licence.

A hundred years previous, then landlord John Evans had applied for the licence, stating that he needed a spirits licence to cater for the farmers and cattle dealers that passed by on the way to Cross Lane market. Despite having a coach shed and room to stable 8 horses, the application was turned down in 1865.  Some of the last licensees at the Gas Tavern were Marjorie Winstanley in the 1950s and '60s, and the O'Coileain family. 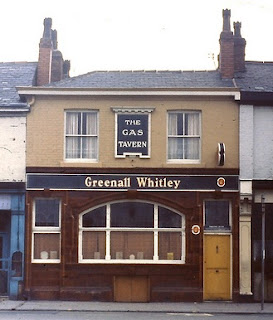 Daithi O'Coileain grew up in the Gas Tavern which was run by his mother for Red Rose Brewery, whilst his father worked as a merchant seaman for Manchester Liners out of Salford Docks.  The brewery was at the Manchester end of Regent Road opposite Water Street and smelt of hops day and night.  'The Gas' was a docker's pub mainly, but plenty of Irish and Maltese lads drank in there.  The pub lobby was also tiled, with the vault to the left and toilets out the back.  Due to the bus stop outside the pub, dray-men would get into rows with bus drivers when they'd lower beer barrels into the cellar onto sandbags, while Daithi would feed their horses apples and carrots.

After passing to Greenall Whitley, probably in the '70s, sadly the Gas Tavern closed in 1981 and stood derelict for a few years before being demolished   The exact spot where the old Gas Tavern stood is today taken by a Sports Direct car park. 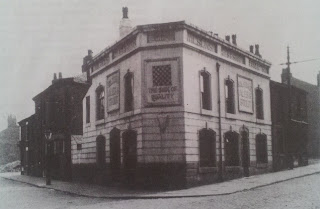 Where Woodward Street meets Chippenham Road today in Ancoats used to stand this distinctive Wilsons boozer, the Corner House.  Like many pubs in the area, it fell victim to "improvements" in around 1958 when the street to the right was called Bradford Street (continuation of Bradford Road).  In Neil Richardson's book, Mick Burke remembers the Corner House as a hawkers' pub as a lot of the locals were market traders [1]. 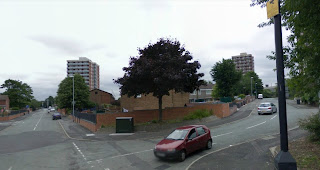 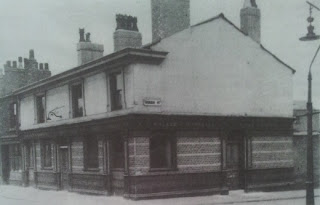 The Bulls Head was a fully licensed public house on Woodward Street, just south of Butler street in the northern part of Ancoats.  It opened in the early 1850s and, as a Walker & Homfrays house, closed after reaching its century in 1958 [1].  This top stretch of Woodward Street is a sorry sight these days with all the old council houses condemned and boarded up in the 2008 shot, below (this is from the opposite angle to the 1950s photo, above). 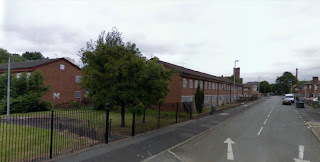