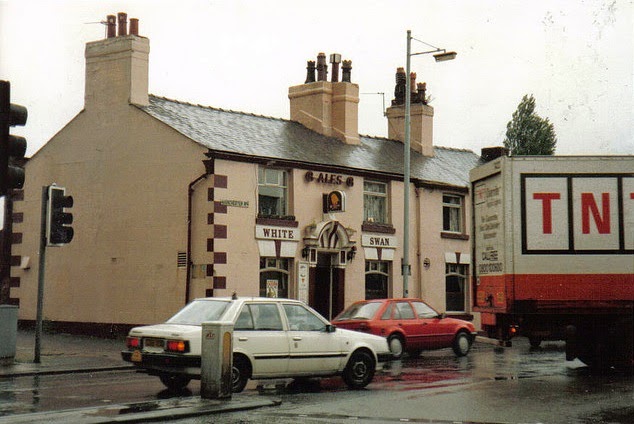 The White Swan stood on the west side of Manchester Road in Hollinwood, across the road from the Old Post Office.  Nicknamed the Mucky Duck, the pub was on the way to the Roxy Cinema if you were travelling up Manchester Road.  Like the Old Post and the Hat & Feathers, the White Swan must have been lost before the M60 cut a swathe through Hollinwood. 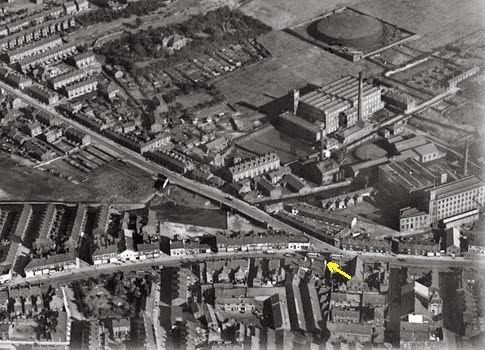 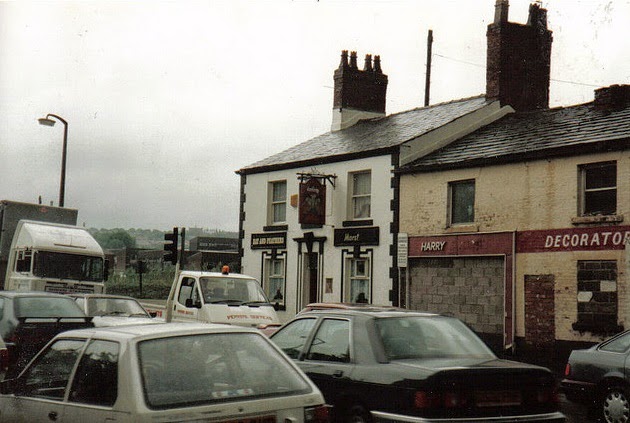 The Hat & Feathers is pictured above in 1991 at No.407 Manchester Road in Hollinwood.  This Marston's house - ran by a Rita and Bernard (see below) - used to stand pretty much where the M60 ring road passes beneath Manchester Road today. 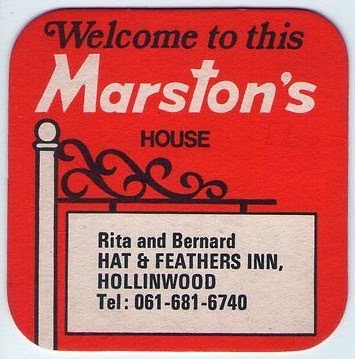 A 1926 aerial map of Hollinwood shows the Hat & Feathers on the east side of Manchester Road, near the junction with Hollins Road.  This stretch of the M60, which cuts vertically through the middle of this image, opened in 2000 so the Hat & Feathers must have been lost some time before that. 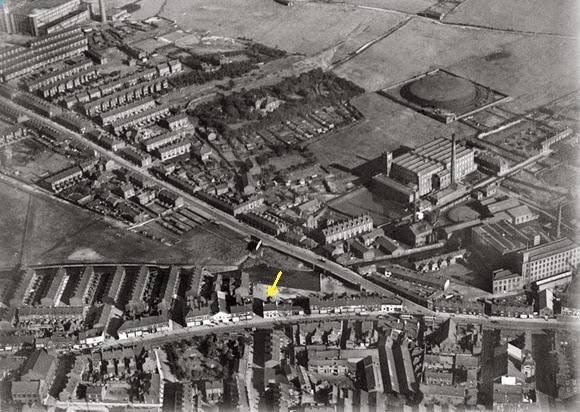 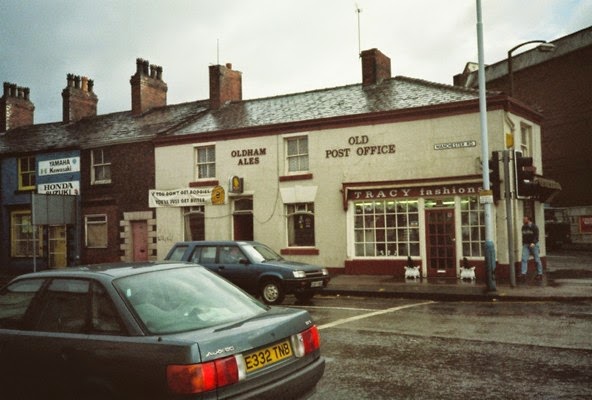 The Old Post Office stood on the main Manchester Road in Hollinwood but it also had an entrance on Hollins Road.  The pub, known locally as The Old Post, was an Oldham Brewery house, despite being owned by Boddington's when Alan Winfield took the above photo in 1988. 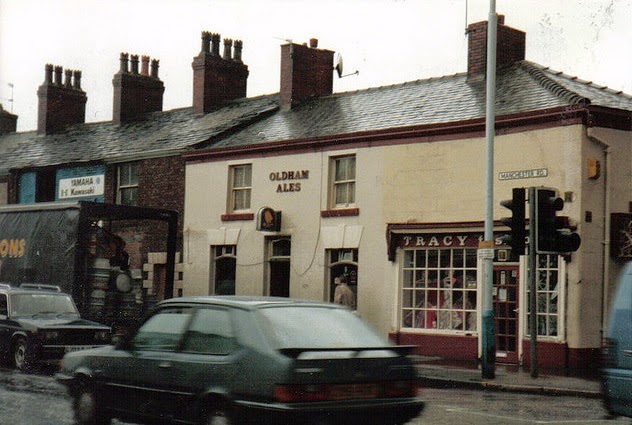 By 1991 the pub sign had gone but the shop strangely incorporated into the pub remained.  The below view of the junction of Manchester Road and Hollins Road show not a post office, but the District Bank.  The Old Post was lost when the layout of the junction was changed with the building of the M60. 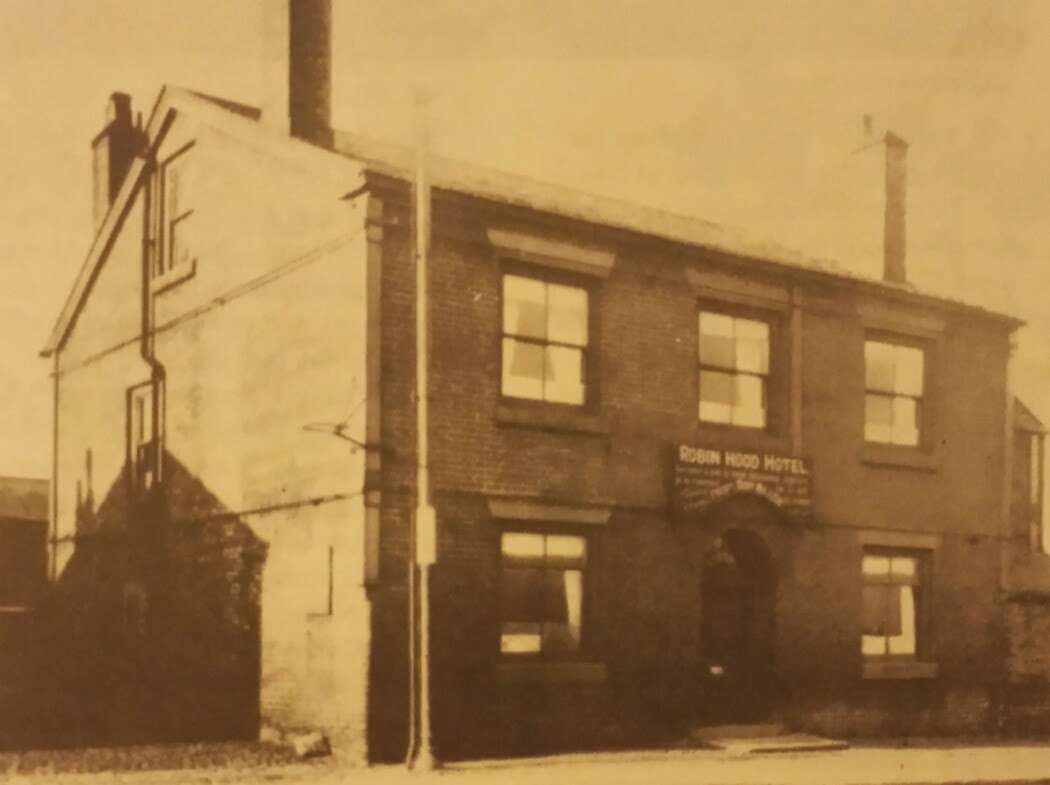 
The Robin Hood on Manchester Road above the M60 is a Flaming Grill food-led pub these days but this big 1930s-build dates back to about 1739.  Back then the Robin Hood farm featured the first alehouse in Clifton, but it wasn't until 1840 that the Robin Hood we see here opened - still part of a working farm but now with a brewhouse.  Local organisations such as the Clifton;s Bowling Club, Football Club and Fishing Club all used the Robin Hood as their HQ.  The pub was also famous for the snake it displayed in a glass cabinet.  When the Worsley Brewing Company bought the Robin Hood in 1920, this led to the eventual rebuilding of the pub nearby on the bowling green the following decade [1]. 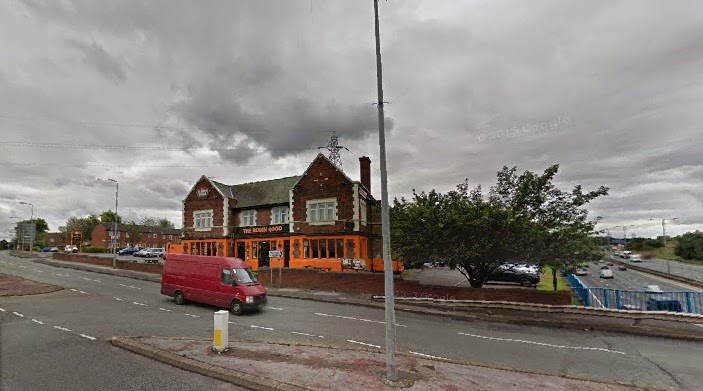 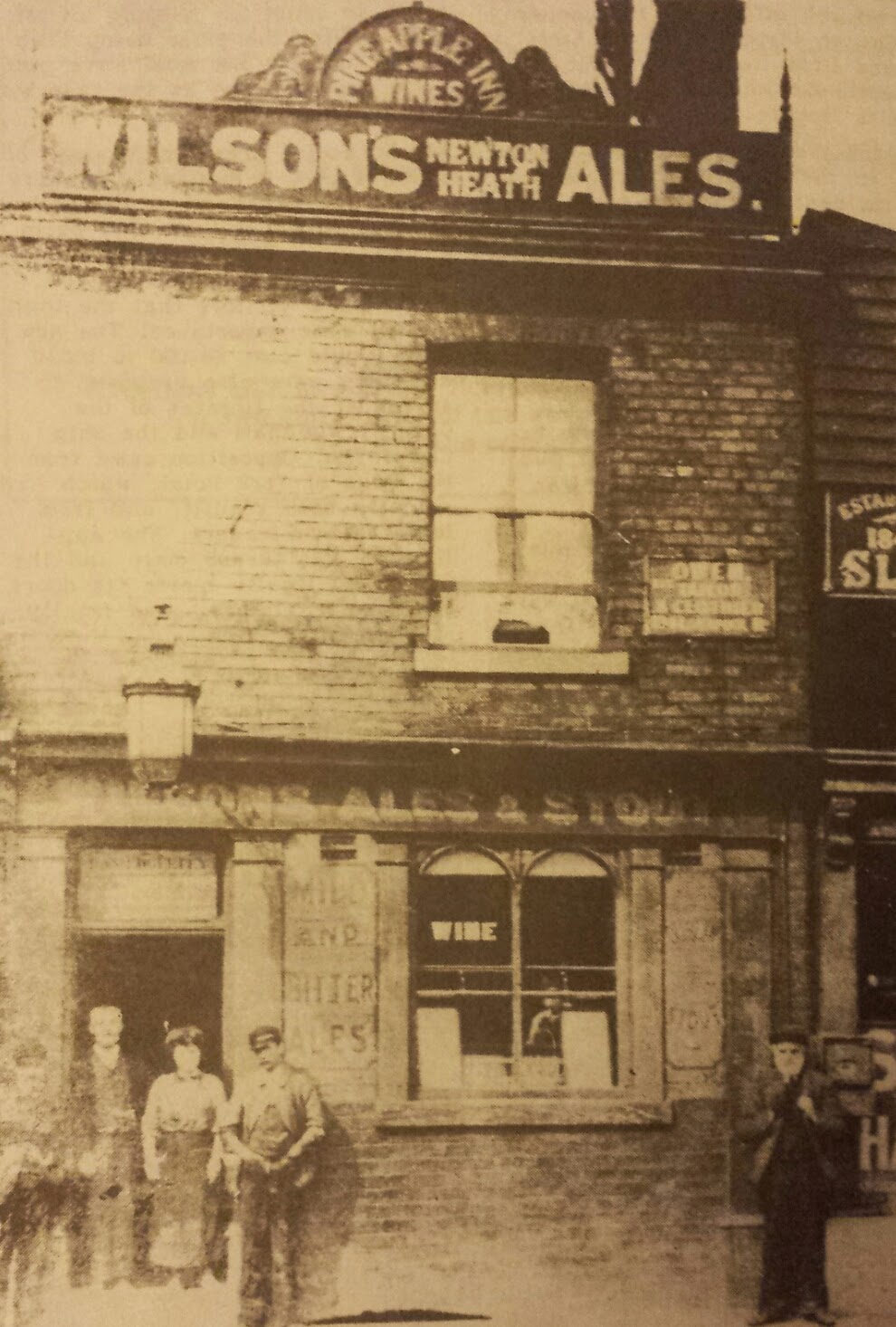 The Pineapple Inn was a tiny pub across the road from the Golden Cross, on Liverpool Road in Patricroft.  It dates back to at least 1869 as a beerhouse when it was owned by William Kay's Britannia Brewery, who became Kay & Whittaker's Brewery in 1900.  Wilson's of Newton Heath took over them in 1903, as seen above in 1906 when the Pineapple was adverting mild and bitter ales, plus stout and wines.  All this in a pub which had one room measuring 13 by 10 feet, and one toilet which was shared by the tenant and all customers.  The Pineapple closed over a century ago in 1910 and was turned into a grocer's shop, itself demolished in 1930 [1]. 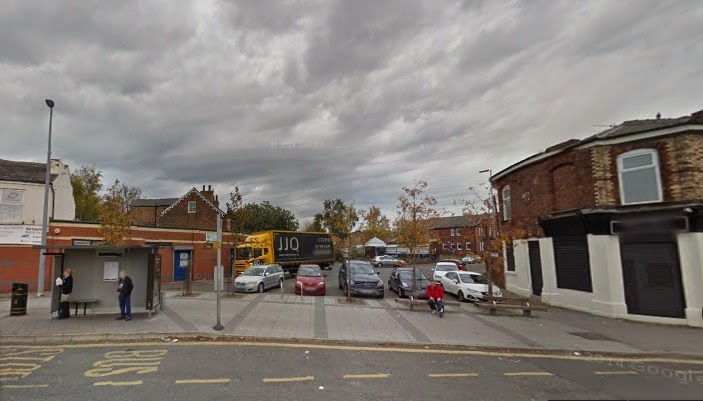 
Burns Cottage was a well-known little pub on Dean Lane on the Newton Heath and Moston border. It stood at No.15 Dean Lane, which puts it on the west side of the road, just off Oldham Road. The 1968 image at the archives confirms this approximate location, and a 1970 photo also show the terraced Marston's house with its Pedigree Ale (still a reasonable pint these days) sign above the door - note the ladies toilets next door.  The etched glass windows also reveal that the pub was previously a Rothwell's Brewery house - W T Rothwell was a  brewer in Newton Heath and the brewery was taken over by Marston's. This corner of east Manchester is undergoing regeneration and the former location of Burns Cottage is now a new housing estate. 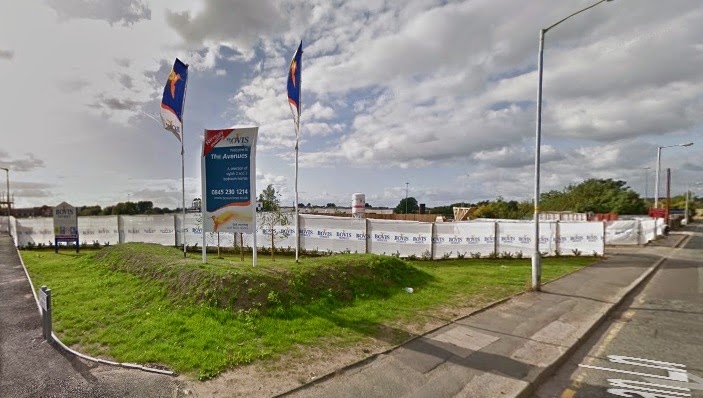 
The Cloggers Arms stood at No. 288 Oldham Road, on the corner with Dulverton Street in Newton Heath.  It's seen at the Manchester Local Image Archives in 1958, and then in 1970 with its main door bricked up, but an expanded white-washed frontage.  In the 1970 photo you can see the huge building next door which still stands today, grandly spanning Dulverton Street and Old Church Street, operating as a kitchen and porn shop.  In its heyday this building was the locally-famous Co-Op department store with its grand clock tower, and later housed an amusement arcade.  On the other side of the street where the Cloggers Arms used to stand, there is nothing. 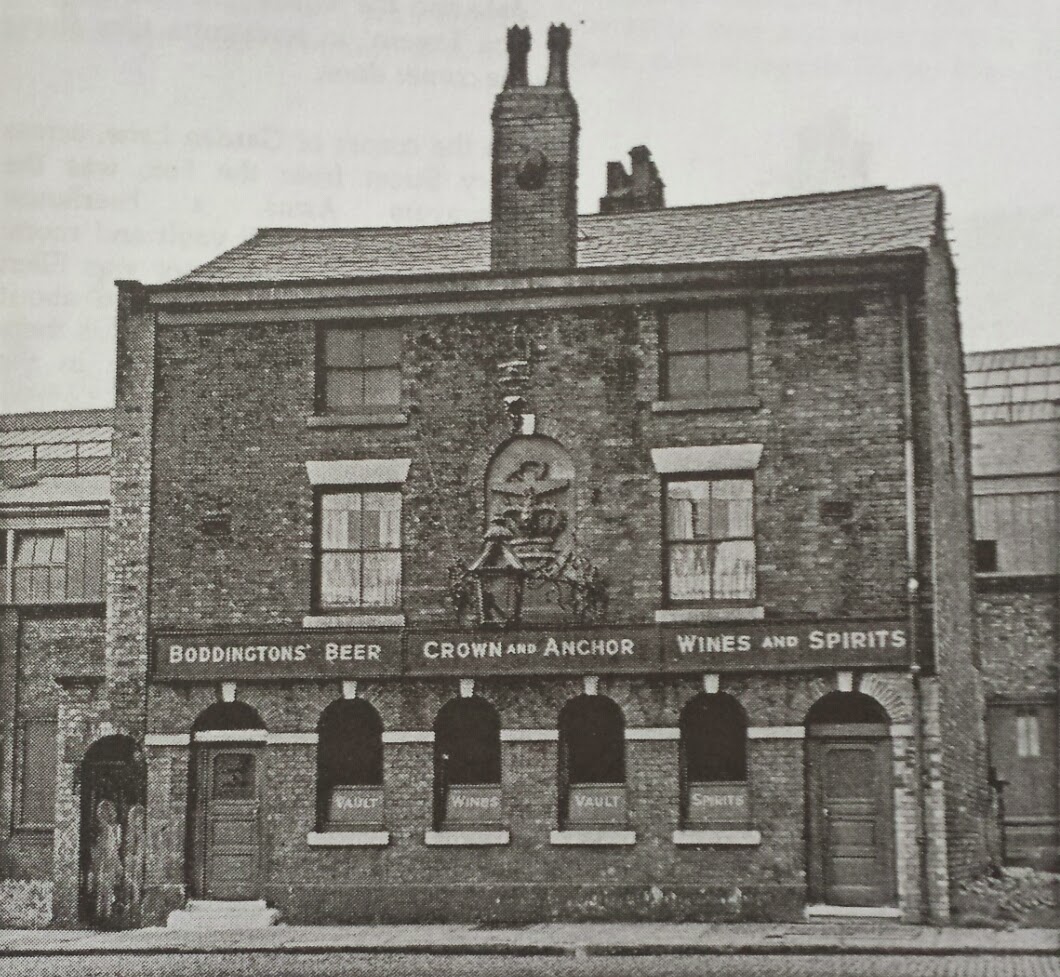 The Crown & Anchor opened on Bury Street in the old town, Salford in 1804, eventually falling under the ownership of Boddington's Brewery about a century later.  In 1938 it was the only building that escaped the Bury Street slum clearance scheme [1].  It was a fully-licensed and fine-looking three-storey house with a grand six-foot high crown and anchor stone work sign.  By the time it closed in the late 1950s, the Crown & Anchor was one of only two buildings standing on Bury Street [1].  The pub was situated just one door in from Garden Lane, which used to run south of Bury Street here, putting its former location on the left, below. 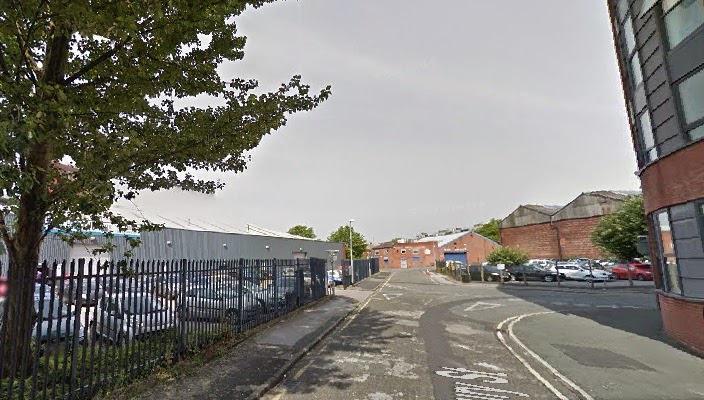 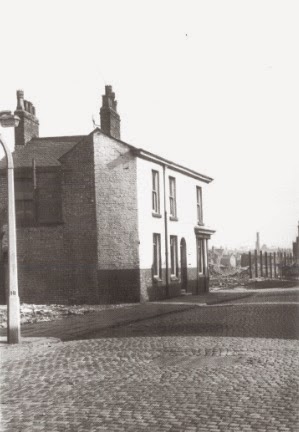 Jacobs Well was a beerhouse on the corner of Ellor Street (bottom end) and Elizabeth Street in Hanky Park, opening in the mid-1850s.  Groves & Whitnall bought Jacobs Well by 1896 and the brewery renamed the beerhouse after themselves, as Grove House.  A compulsory purchase order in 1959 - presumably an early part of the Hanky Park slum clearances - saw off the Grove House in 1960.  Then landlords, George and Tilly Banner, moved to the Park Inn on Tatton Street, Ordsall, which was later to become the Rovers Return [1]. 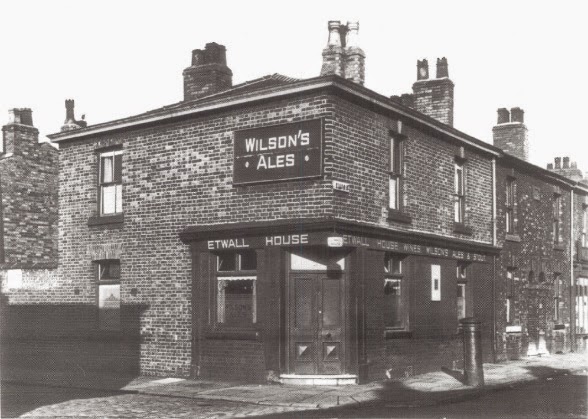 The Etwall House opened on the corner of Ellor Street and Grafton Street in the 1860s, halfway along Ellor Street.  Wilsons Brewery took over at the start of the twentieth century but its days were numbered when the Ellor Street No.4 clearance area included it in 1960.  As such, the Etwall House closed in April 1963 on Black Sunday, and by this time all the houses surrounding the pub had been demolished - pubs were islands in a sea of rubble.  The landlady, Mrs Amorel Greatorex, told a Manchester Guardian (the forerunner to today's Guardian) reporter that the last winter in the pub was the worst, with "the cold coming in at every wall."  A few days before Black Sunday (the day Hanky Park's pubs finally closed), the reporter wrote that 10 pubs remained standing in the 86 acres of Ellor Street and Hankinson Street [1] (the street which gave the district its name).