The Britsh Queen beerhouse stood at no.119 Bury Street on the corner with Pearson Street. It was closed a year or two before the above 1908 Salford Weekly News advert. The British Queen's owners, the Rochdale & Manor Brewery received £1,400 compensation. It was the 1904 Compensation Act that finished off the beerhouse when its weekly sales of three barrels of beer a week was judged "not bad" but not enough to justify its continued existence [2]. Also mentioned in the advert is the Bee Hive Inn on Gold Street [1]. This beerhouse met the same fate, and its story will also be covered here soon. 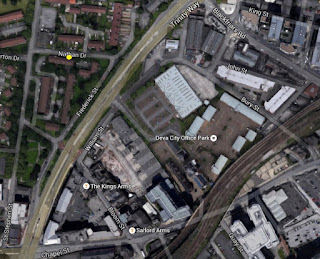 The British Queen can be traced back to the 1840s, and the first link to the brewery was when Manor Brewery, of nearby St Stephen Street, owned the British Queen by the end of the 19th century [2]. Bury Street has been truncated due to the building of the St Stephen Street estate, and its former location is roughly where Nathan Drive is today, close to the still serving Mulvaney's estate pub (the old Bird In Hand).