Until relatively recently, the Braziers Arms was a well-known public house on this street off Garden Lane in old Salford. Hodson Street's beerhouse, the Elephant & Castle, closed many years earlier. It was on the same side as the Braziers, about 50 yards from Garden Street. The Elephant & Castle can be dated back to 1836 and appears on the 1848 map (#64, above) alongside its larger neighbour (#65) [1]. The beerhouse had an eight-barrel brewery of its own and by the 1880s it had extended into the next door property. The Elephant & Castle closed in 1905 under Sam Norbury [2], and the Trinity Road ringroad now passes over its old location. 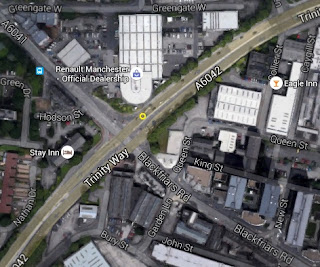