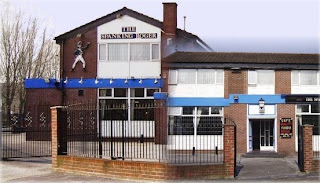 We rather enjoyed our Saturday noon visit to the Spanking Roger on Sawley Road, Miles Platting, although we got slightly lost walking through the estate from Varley Street and had to be directed to the pub by a friendly local.  Despite walking down Hulme Hall Lane to Oldham Road numerous times post-match, we had somehow never spotted this big estate pub, probably due to it being hidden by leafy trees for most of the year.  Imagine our delight when we spied a Holt's bitter pump clip on the bar - sadly, like the Holt's Smooth, it wasn't on, so we opted for a couple of Guinnesses (surger cans) despite the friendly landlord's valiant efforts to sell us John Smith Smooth! 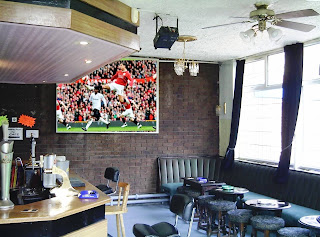 That's enough from us, as we are delighted to feature this guest review from Alan Horrocks (@onedayinwatford) who visited the pub last month.

I love pubs, I love pubs I’ve never been in, I love a good pub name and I love pubs that when I ask questions about them, people look at me with a look of genuine horror on their faces and ask me why the hell on earth would I want to go there.  As far as pub names go, The Spanking Roger is easily up there with the best of them; in fact it’s probably the best.  The fact it’s in the middle of a huge housing estate in the middle of Miles Platting, just off Oldham Road, right on edge of the city centre, had me salivating.  A friend visited it last year but didn’t stay long, he said he felt really on edge and at one point hid in the toilet just to send me a text message.  He likes a smoke of the green stuff so I put his fear down to him having rolled himself a rather large spliff and simply having too much paranoia whirling around his unrestful mind. 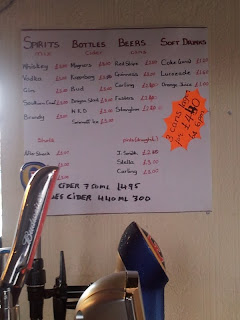 
After repeatedly putting off visiting it I decided to get my arse in gear and get down there, so one Thursday afternoon a couple of weeks ago I gave them a quick call to make sure they were open and then set off down there.  From Shudehill bus station it’s about a 15 minute walk along Oldham Road.  I arrived (via a pint in The Wheatsheaf that was closed the last time I tried to visit it) and was immediately greeted by the landlord.  A big strapping, very welcoming, 6ft black man with a big beaming smile and very firm hand shake.  It was like love at first sight.  As there was no draught lager “until the delivery man has been, in about 30 minutes” I settled on a can of lager (£2.30 but you can get 3 for a fiver). 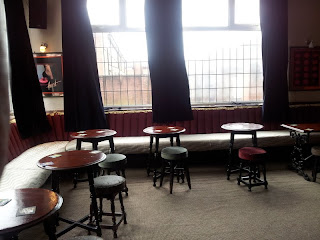 
The pub is very much your standard estate pub, two large rooms separated by the decent sized bar.  Inside and out, it’s not in the best condition, but then Miles Platting is hardly Alderley Edge.  Hot food is available - via the pie heater behind the bar – but there was a sign for Afro-Caribbean food but, presumably, this is only available at weekends or on match days (the pub is about a mile from the Etihad Stadium).  There were 9 or 10 in there, mostly all of them were 70+ and looked to have been in there since opening time.  Because of the perpetual rain at the time of my visit, the gas fire was on and turned up full.  Manny, the landlord, asked me if I was the person who had telephoned earlier to see if the pub was open.  He loved the fact that I’d trudged down in the rain to visit his pub. 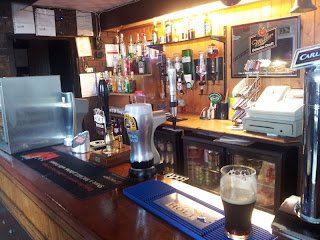 
I’m not entirely sure where the name of the pub originates but during a bit of brief research I found reference to a wealthy gentleman by the name of Roger Aytoun, who lived in Manchester in the 1700s.  Apparently nicknamed "Spanking Roger" due to his willingness to fight, he sounded quite a character (presumably Mr Aytoun also gave his name to Aytoun Street, which you travel down on the tram in between Piccadilly and Piccadilly Gardens).  Another reference I found was a horse by the name of Spanking Roger, who raced at Kersal Races, also in the latter part of the 1700s.  There was also a final reference a piece of music written by James Nuttall of Rossendale, called "Spanking Roger", but I suspect this was some form of tribute to the race horse.  The Spanking Roger is genuinely one of the best, most welcoming pubs I’ve visited in recent years.  A Manchester classic, get down there whilst it’s still open.  I can’t wait to return. 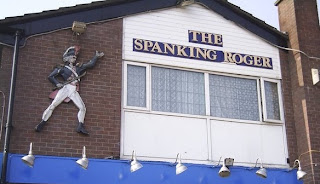 
The Spanking Roger is one of a select group of Manchester pubs immortalised in poem, although rather than romantic prose, Keith Armstrong captures the gritty realism of Manchester inner-city estates wonderfully:

This must be the lowest hour of the low.
I am wet through in the dog-end gutter of a whiplashed Manchester,
Where the rain bolts down and the darkness simply soaks you to the guts of your soul.
I am a lost boy, drenched from the black Pennines;
A stranger drinking a glass of gloom with Thatcher’s underclass.
Here, in the Spanking Roger, Miles Platting,
They are all making a racket, working the rotting system.
You can get touched up for a tanner or spanked, wanked and rogered for a bob.
It’s all in a sodden carrier bag, a greasy spoon;
All in a backstreet cruise,
A sopping blow job,
A blob for a raindrop:
This Manchester-wet dream.