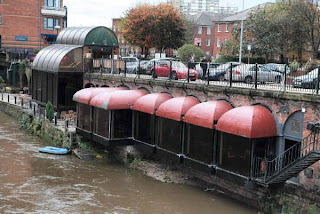 
The Mark Addy originally opened in 1981 by local entrepeneur and bookmaker Jim Ramsbottom, and was alleged to have held numerous clandestine meetings of the local Quality Street Gang. Whilst this may be just just rumour, myth and mis-truth, it has added to the general air and history of the place. Indeed this was a tale told to youngsters like myself many times in the late '80s when it was a place that wouldn't always let us young 'uns in at the time, and how it would be best for us to to just "leave quietly lads." 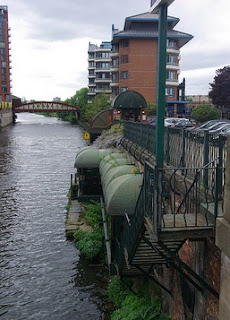 The pub itself is situated under the old arches in what was once a landing stage for the River Irwell ferry that used to run up and down in the 1800s. The Mark Addy is named after the famous local hero who was responsible for saving at least 50 people from their deaths in the days when the Irwell was a busy thoroughfare. In fact Addy was the only civilian to have received the Albert Medal (Victoria Cross) from Queen Victoria [1]. 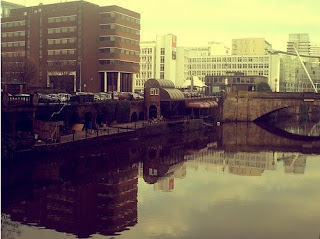 Mark Addy, Stanley Street. (c) Tony Hassall at flickr.
The premises were taken over by Robert Owen-Brown in 2009 with the emphasis very much on food. After Owen-Brown's well-received but ulimately failing bids to turn the Bridge Street Tavern (the Bridge) and old Beerhouse, the Angel, into gastro-pubs, he seems to have got the Mark Addy spot-on. In the short video below, Owen-Brown talks about the Mark Addy's resurgence.
The insides have had a refurb with upmarket furniture and fittings and it's set out nice and unobtrusively. The bar has now been moved nearer to the door so that casual drinkers don't have to wander through assorted diners, the only slight gripe is the lack of toilets on the floor where you are sat - instead you have to go back to the doorway and top of the staircase where you came in. This is a minor irritation only though, and this staircase itself is another of the pub's novelties, reminiscent of an old '80s nightclub entrance. 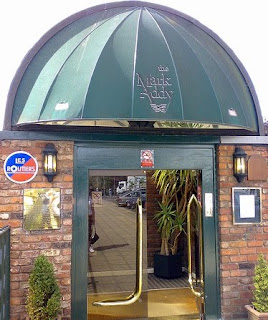 Whilst I've no doubt the food is excellent, it's beer we are generally after, and it didn't disappoint on this front. Four real ales on, all appearing to be well kept and at the right temperature, was pleasing find. The local-ish Prospect Oresome was a refreshing summer ale (perfect to clear the palette after a few Guinnesses and Carlsbergs at the Lowry). At £3 a pint, it's slightly on the pricey side in general, but about right for this type of restaurant and location. In the '90s it was a Boddingtons Freehouse. 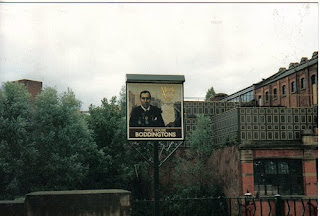 Mark Addy, Stanley Street, 1990. (c) deltrems at flickr.
Quiet on the weeknight we nipped in but this place by all accounts attracts the local foodies and Manchester Confidential set, and is doing well on the back of its Owen-Brown connections. The Mark Addy is still well worth a visit despite being slightly just outside of our boundary, and I would recommend it to all, particularly in the summer when you can sit by the riverside on two separate terraces and watch the flotsam float by. 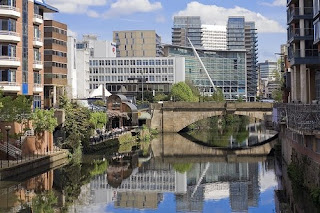 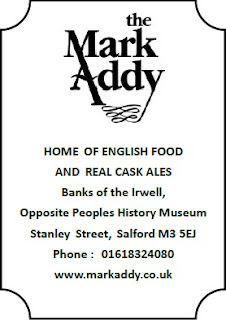