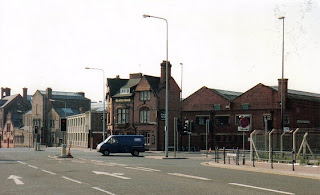 
On the corner of Blackfriars Road and the Salford side of the inner ring road, Trinity Way, sits the firmly closed Boddies house, the Black Friar, also known as the Blackfriars Hotel for a time [1].  As the stone engraving states, the building dates from 1886 but originally the pub at this site was the Old School Inn [2].  The 1848 Ordnance Survey map shows that old School Inn on the corner on King Street, on the corner with Blossom Street [3], also seen below in 1949. 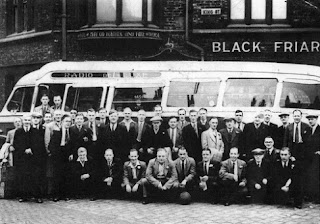 Black Friar, King Street. (c) robsue888 at flickr.
When Blackfriars Road was extended from Manchester right into Salford the road layouts around here began to change beyond all recognition, so when the current pub was built in 1886, it was now on the corner of Blackfriars, King Street and Blossom Street.  You can just make out the old Blossom Street sign on the side of the pub. 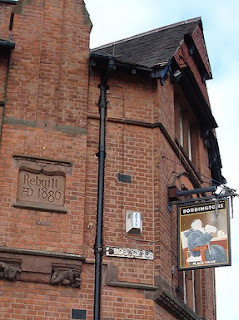 
In 1975 the Blackfriars Hotel was described as an attractive smoke-blackened building with "You may go further and fare worse" engraved on the front wall.  It had a bees and corn sheath coat of arms with the inscription "Black Friars Old School" - a nod to the old pub, or perhaps reference to an even older function of the building that once stood here?  The Boddington's bitter was so good in the Blackfriars Hotel that keg ale and lager was not even available [1]. 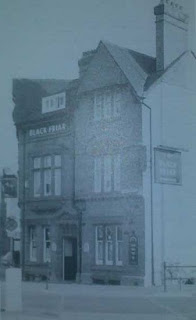 Black Friar, Blackfriars Road, 1989. (c) CAMRA [2].
By 1989, Trinity Way had been built and the pub had reverted back to the Black Friar, a Boddington's house, yet it remained a thriving community local despite the changes going on around it [2].  The pub remains a Grade II listed building with the exterior and interior listed in detail here [4], having closed not that many years ago. 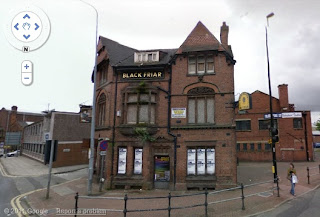