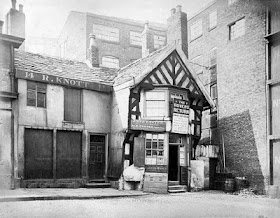 
Ye Olde Rovers Return (inspiration for Coronation Street's Rovers Return?) was reported to be the oldest public house in the country, the building dating back to 1306, as seen on this drawing.  It was built as a manor house for the Wythin Grave family, and became a pub in the 18th century [1].  There's a load of photos of the Rovers Return at the archives seen here in 1873, here in 1882; here in 1905; advertised as the oldest beerhouse in Manchester here in 1910 with a proud looking young fella stood outside; here as a working men's café in 1938; here from a different angle in 1949; finally here as late as 1956 with a more modern market taking place in front of it, just before it was demolished in 1958.

In its last days it was known as the Rovers Return Trinket Shop, which was said to be haunted by the ghost of a young Jacobite soldier who was often seen gazing at a picture of Bonnie Prince Charlie and Flora MacDonald in the shop [2].  There were also reported passages beneath the building running towards the Cathedral [1]. 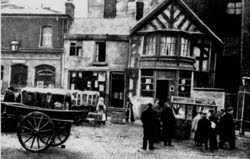 
The Rovers was next door but one to the Old Mosley, which itself was on the corner of Watling Street.  The large building to the right of the Rovers means the Rovers can't have been on the New Brown Street corner of Shudehill.  Therefore, bearing in mind that Withy Grove ends and Shudehill begins at Dantzic Street (and also New Brown Street in the past), then the location of the Rovers was where the Zavvi and Shudehill car park entrance is now (so therefore not far up from the Seven Stars).

A couple of paintings show the old place in much better nick. Wonder who the Benjamin is in the postcard, and whether he used to sup in the Rovers... 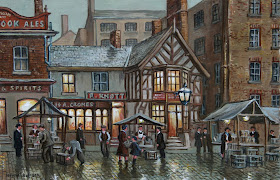 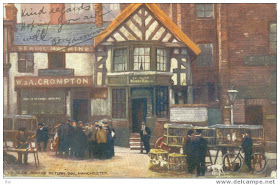